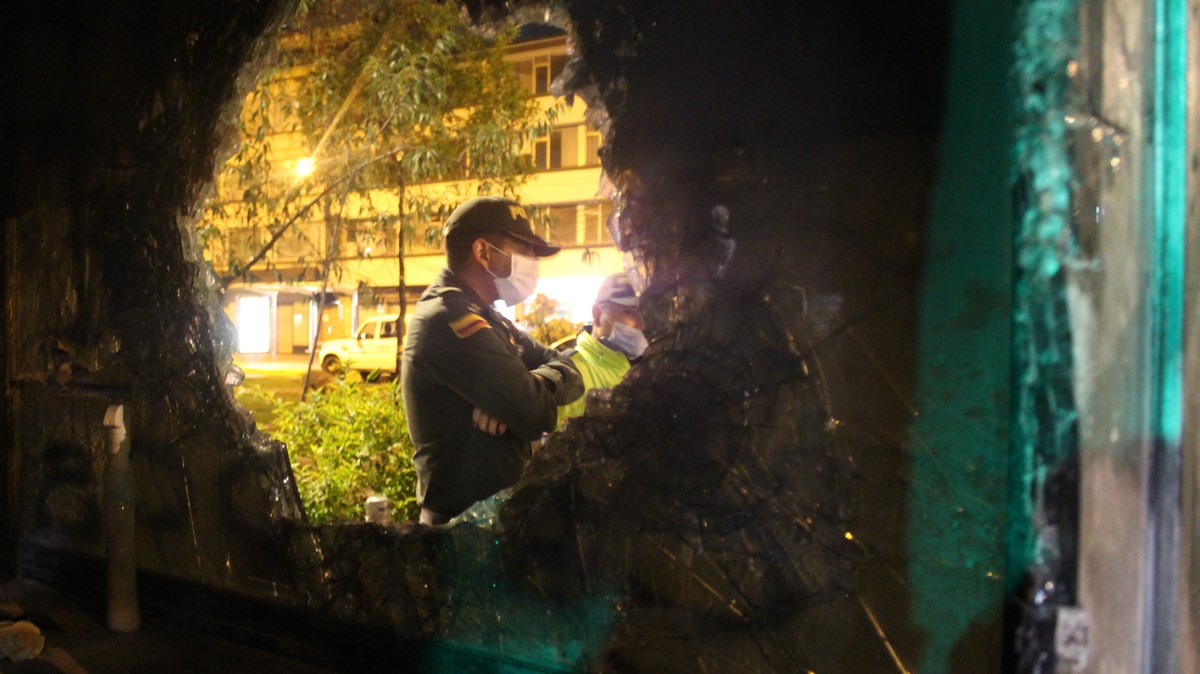 BOGOTÁ, Colombia – “This was where extortions, persecutions and systemic violence took place,” says Andrea Blanco, a community leader in the working class neighborhood of Suba, Bogotá, referring to the burnt out mini police station behind her where volunteers were handing out books to curious onlookers.

Nearby, an activist gave a speech from the roof of a building. Two days before, Suba was the epicenter of intense police violence when protests over the death of Javier Ordóñez in police custody on September 9 swept the city.

“We converted it into a cultural space for the community, a symbol of peace,” said Blanco.

A confrontation between police and protestors in Suba led to the death of Juliana Ramirez, an 18-year-old psychology student. Ramirez was hit in the chest by a stray bullet as police reportedly fired indiscriminately into the protesting crowds. She died on the spot. Her father told the local press she was walking home with a friend.

The morning after the bloodshed, Blanco and artists from the community created a space dedicated to Ramirez in the burnt out station. They painted her portrait on the wall and covered the precinct with murals.  “A center to create a new world based on culture rather than violence,” reads the hand painted sign where dozens of books are displayed.

The idea is spreading. Another destroyed police station in the neighborhood of Soledad was taken over and dubbed the “Biblioteca Popular”, loosely translated into “the people’s library” by activists. A renowned Colombian cumbia DJ hosted a dance party in the streets here as volunteers screened films on the long and bloody history of Colombian State violence on the third night of citywide protests.

“Our goal is to create a free and permanent space that promotes cultural exchange,” says Paula Roja, who helped create the space, as she sorted through a pile of books. “This isn’t purely performative.”

Meanwhile, the police station where Javier Ordóñez was killed in Villa de Luz was made into a temporary shrine in his memory, and decorated with messages of love and hope for peace.

Police initially dismantled all three of the repurposed precincts, painting over the colorful murals created by activists with grey primer after evicting volunteers with tear gas and batons. But activists came back the next day and replaced them.

“We weren’t the people who burned down the station,” says Blanco in Gaitán. “At first we got pushback from the police. But they have come to realize we have positive intentions and our relationship [with the police] has improved.”

Roja, in Soledad, is negotiating with authorities. “We don’t have to occupy the police station,” she says. “We are looking for a permanent space in the neighborhood.”

In the meantime, they bring out their books on subjects ranging from art and philosophy to politics every afternoon and stay until the crowds disperse.

The police station where Ordóñez was killed, and where all of these protests began, was reclaimed by police. But they left the shrine in his memory and the messages of peace intact.