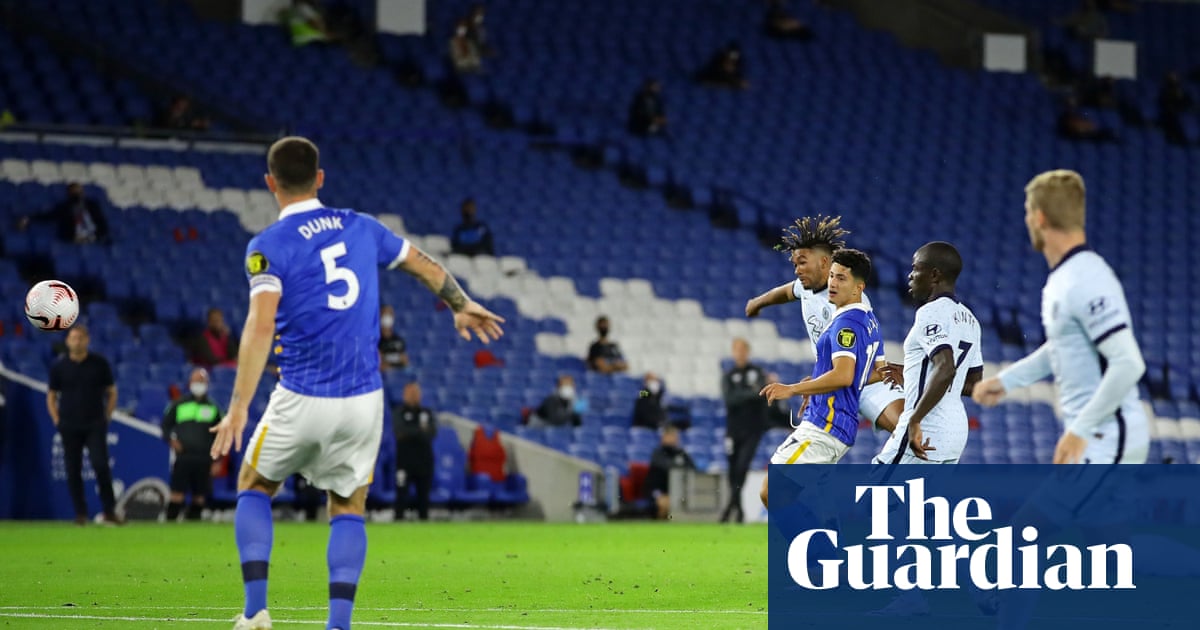 On a lovely late-summer night in Falmer the first fruits of Chelsea’s extravagant close season spending were evident. Timo Werner looked the liveliest part of an initially ponderous, increasingly fluent 3-1 defeat of Brighton, who were both impressively slick and a little unlucky.

For twenty-two minutes at the Amex Chelsea’s latest new age struggled to find its rhythm, component parts clanking together, looking for ways to fit.

There was a brief snapshot of the work still to be done as Frank Lampard’s two German debutants combined, Kai Havertz playing a lovely flick pass to Werner on halfway, only for Werner’s own touch to find Marcos Alonso steaming upfield outside him with all the carefree abandon of a heavily laden Victorian coal barge.

Otherwise Yves Bissouma and Steven Alzate had the better of the midfield exchanges, right up until the moment Alzate played a horrible pass straight to Jorginho on the edge of the Brighton area. He slipped the ball to Werner, who surged forward and was tripped by Mat Ryan as he veered in on goal. Jorginho put the penalty kick away with a bravura little swivel and side-foot, celebrating with a shout.

It didn’t feel like a moment of ignition exactly; in part because Brighton had been the livelier team to that point.

But then, there was always a temptation to build this game up an instant referendum on Chelsea’s summer spending spree, and indeed on Lampard’s own fitness to juggle the extraordinary talents now at his disposal.

In reality it will take time for the jet-lag of a crazed few months to fade. Hakim Ziyech and Ben Chilwell were absent at the Amex. Thiago Silva is still “acclimatising” to the new normal of life in the biosecure Premier League, in which case good luck with that old bean and see you in about two years.

Werner is Chelsea’s outstanding summer arrival, and looked it from the start, lining up as a mobile, roving centre forward, with Havertz starting on the right side of an attacking three.

For Brighton, Graham Potter went with a back three, the jet-heeled Tariq Lamptey, once of the Lampard vanguard, starting at right wing-back. Ben White and Adam Lallana also made debuts.

The Amex was a striking sight at kick-off, empty stands brilliantly illuminated, powder blue sky fading over the lip of the swooping main stand. Brighton pressed forward either side of Chelsea’s goal, zipping the ball around nicely and finding space on the flanks.

For Chelsea Mason Mount was bright. And just before the interval Werner showed his precision again, cutting inside on the left and shooting fiercely towards Ryan’s near post. It was an isolated moment of clarity in a woolly first half that saw Brighton dominate possession, and pick away at the Chelsea defence without ever quite threatening to wrench it open.

Lallana had limped off just before half-time, to be replaced by Aaron Connolly, and it was Connolly’s chest that drew an early save from Kepa Arrizabalaga after the restart, bundling the ball goalwards from Solly March’s driven cross.

Brighton’s entire squad cost somewhere in the region of one headline Chelsea midfield signing, but they continued to look the more settled, orderly team, moving the ball around sweetly and pressing in well-drilled packs.

With 54 minutes gone Leandro Trossard scored a deserved equaliser, taking a pass from Lamptey and curling a fine left-footed shot into the corner as Arrizabalaga flailed vaguely across his line.

Two minutes later Chelsea were back in front thanks to something genuinely spectacular from Reece James. Jorginho fed the ball across midfield. James took it 30 yards from goal, took a step, and spanked his shot in a hard, flat, dipping arc into the top corner of Ryan’s goal.

The game was suddenly open. Lewis Dunk should have made it 2-2, but headed just past a post from eight yards out. But Chelsea were keeping the ball now and passing with more purpose. A spell of possession ended with James forcing a right-wing corner. His out-swinging delivery was volleyed in by Kurt Zouma, his shot taking a large deflection en route.

At 3-1 down Brighton looked a little puzzled, their endeavour undone by some moments of incision and a little bad luck too. But Chelsea were shutting the ball about with some elan by now, Mount and Havertz combining once or twice, and Ross Barkley adding some drive to what had been a rather static double-pivot in the centre of the Chelsea midfield.

By the end Chelsea were dominant as high-grade attacking reinforcements – the well is deep – arrived from the bench. There is plenty of slack to be taken up in this evolving Lampard team. But this was a safe first step.