Nearly all the dozens of people reported missing after a devastating blaze in southern Oregon have been accounted for, authorities said, as crews battled wildfires that have killed at least 35 from California to Washington state.

The Democratic governors of all three states say the fires are a consequence of climate change, taking aim at Donald Trump ahead of his visit Monday to California for a briefing. Joe Biden planned to address the fires and the climate crisis during a speech in Wilmington, Delaware.

Flames up and down the west coast have destroyed neighborhoods, leaving charred rubble and burned-out cars, forcing tens of thousands to flee and casting a shroud of smoke that has given Seattle, San Francisco and Portland some of the worst air quality in the world.

The smoke filled the air and spread to nearby states. While making it difficult to breathe, it helped firefighters by blocking the sun and turning the weather cooler as they tried to get a handle on the blazes, which were slowing in some places.

But warnings of low moisture and strong winds that could fan the flames added urgency to the battle. The so-called red flag warnings stretched from hard-hit southern Oregon to northern California and extended through Monday evening.

At least 10 people have been killed in Oregon. Officials have said more are missing, though they have not said how high the toll could go. One person has died in Washington state. Thousands of homes and other buildings have burned. 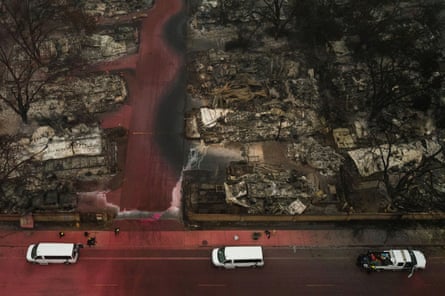 A search and rescue team looks for victims in the aftermath of the Almeda fire in Talent, Oregon Sunday. Photograph: Adrees Latif/Reuters

The National Weather Service (NWS) issued a red-flag warning for the area, through Monday night. Incident meteorologist Dan Borsum said strong southerly winds and low humidity would result in elevated fire weather conditions across the region. He said conditions may improve a little bit Tuesday but not a lot. Borsum added that air quality may not improve until October.

In Oregon, firefighters spent Sunday setting and holding containment lines and starting to assess damage. The US Forest Service said weather conditions which include mist and favorable wind were helping. Large fires in Clackamas and Marion counties remained completely uncontained. The Riverside fire was still within half a mile of the small city of Estacada, but the spread had slowed. In Marion county, where firefighters have been battling the Lionshead and Beachie Creek fires, evacuation levels of several cities were reduced.

Oregon’s fire marshal, who resigned after being placed on leave amid an investigation, says he “didn’t do anything wrong”. Jim Walker told TV news station KOIN in Portland that state police put him on leave after he tried to help a co-worker whose family was missing in a fire zone, saying his superiors decided he had overstepped his authority.

Numerous studies in recent years have linked bigger wildfires in the US to global warming from the burning of coal, oil and gas.

This year, California has seen six of the 30 largest fires on record. In mid-August, a highly unusual barrage of dry lightning sparked infernos that are still burning – including the monster August Lightning Complex, the largest fire in state history. In Oregon, some areas have not seen such intense fire in 300 or 400 years, said Meg Krawchuk, a pyrogeographer at Oregon State University. Across the west, drought has helped fuel the flames. 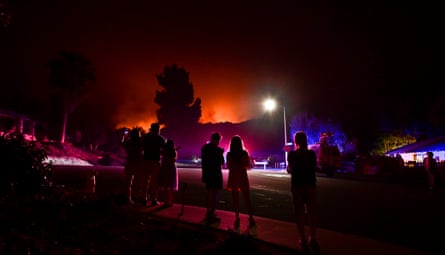 Although sorting the weather conditions from the climate change is difficult, Krawchuk said, it is clear that global heating “has its fingerprint on these fires”. Drier, hotter atmospheric conditions leave the landscape more prone to burning, she said.

“We’re increasingly worried about the probabilities of more and more frequent, extreme drought, and that’s teeing us up for more fires,” she said.

A century of fire suppression is, paradoxically, another reason some for the huge explosive fires. Before European colonization, between 4.5m and nearly 12m acres of California burned, scientists estimate. Many of those fires were controlled burns, set by Native American fire practitioners to clean out fire-fueling vegetation, renew the ecosystem and avoid larger, runaway fires later.

“Indigenous people were burning throughout the year,” said Don Hankins, a Plains Miwok fire expert at California State University, Chico. “What’s happening now there’s so much over such a short period of time.”

At a rally in Nevada on Saturday, Trump blamed inadequate forest management.

On Sunday, Washington governor Jay Inslee shot back, telling ABC: “It is maddening right now that when we have this cosmic challenge to our communities, with the entire west coast of the United States on fire, to have a president to deny that these are not just wildfires, these are climate fires.”

In Oregon, firefighter Steve McAdoo has run from one blaze to another for six days.

“We lost track of time because you can’t see the sun and you’ve been up for so many days,” he said. “Forty-eight to 72 hours nonstop, you feel like you’re in a dream.”