In the golden autumn sunshine, the tree boughs in the National Trust’s traditional orchards hang heavy with fruit.

Apples of all shapes and sizes, many with characterful names – Dog’s Snout, Catshead, Pig’s Nose Pippin – and glorious histories are ready to be picked.

While arable farmers in parts of the UK are worried about this year’s harvest, it has been a good year for many heritage orchards.

A largely warm, settled and lengthy spring with few late frosts resulted in a spectacular blossom season, which when followed by rain in July and August helped the fruit to swell.

Visitors to some of the 200 traditional apple orchards the National Trust cares for are being invited to take fruit away in exchange for a donation. 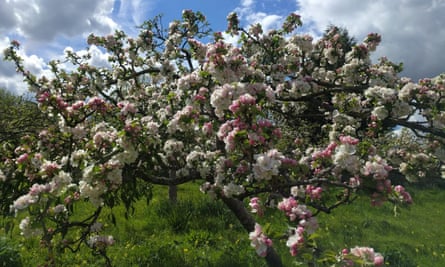 At Nunnington Hall in North Yorkshire, the head gardener, Nick Fraser, said the crop was the best for several years. “We care for over 25 varieties of apples here including Dog’s Snout – a variety which is slightly pointed – the Ribston Pippin and Yorkshire Beauty,” said Fraser.

“As we won’t be using so many apples this year in our kitchens due to visitor numbers being restricted due to coronavirus, we are bagging fruit up for visitors and asking for donations. We’ll also arrange for any leftovers to go to our local food bank so nothing goes to waste.”

It has been a brilliant year for the circular fruit orchard at Cliveden in Buckinghamshire, which is in the midst of a restoration project.

The lead ranger, Tim Crauford, said it was the best fruit harvest in recent times.

The mid-19th-century Round Garden is thought to be the only surviving example in the UK of a circular fruit orchard from this period. It was highly ornamental, with apple, plum, cherry and pear trees growing up and over iron hoops. 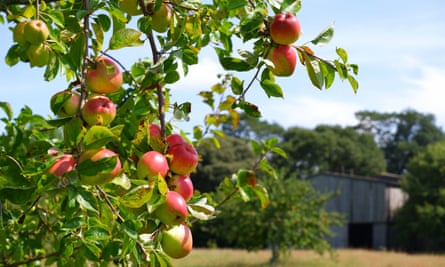 Apples ripening at Cotehele in Cornwall, which is inviting visitors to pick their own. Photograph: Rich Burrow/National Trust/PA

David Bouch, the head gardener at Cotehele in Cornwall, said it was an excellent year for fruit there. Usually Cotehele brings in pickers to turn the apples into juice or cider.

“Due to Covid-19, we are going to be inviting visitors to pick their own and to make a small donation to ensure the apples don’t go to waste,” said Bouch.

There have been challenges. A heatwave in north Wales in August followed by heavy winds put the trees at Erddig in Wrexham under pressure.

The head gardener, Glyn Smith, said: “The very hot weather recently has stressed the trees and the apples seem to be ripening earlier than usual, and are smaller. The recent winds haven’t helped us as we have lost quite a lot of fruit because of the gale-force winds.” 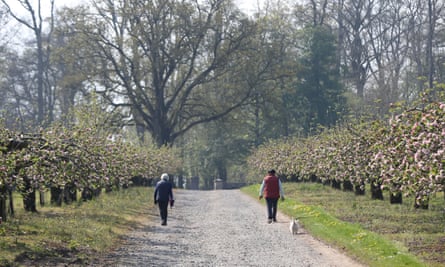 The 5,000 apple trees at Ardress House came into bloom early, but a frost in mid-May damaged the blossom. Photograph: Niall Carson/PA

It has also been a tricky year in the orchards at Ardress House in County Armagh in Northern Ireland, where an unexpected frost in mid-May affected blossom.

Greg MacNeice, a tenant farmer and cider maker, said: “Our trees are nothing if not resilient and they found a way through by producing a second lot of bloom. This late bloom has produced apples which are smaller than normal and irregular in shape, but will nonetheless help us produce an excellent cider.”

Callum Weir, the farm manager at the trust’s Wimpole Home Farm in Cambridgeshire, said it had been a challenging year for arable farmers. “We’ve had a pretty average harvest of our wheat, oats, rye and barley crops,” he said.

“We had wet weather at just the wrong times, for the planting season at the end of 2019 and then during harvest last month when we had more rain in one month than in May, June and July combined. This, combined with the drought in between, meant that our crops struggled right in the peak growing season and it was tough to get the harvest in. This will inevitably result in higher prices for consumers of staple products like bread.”