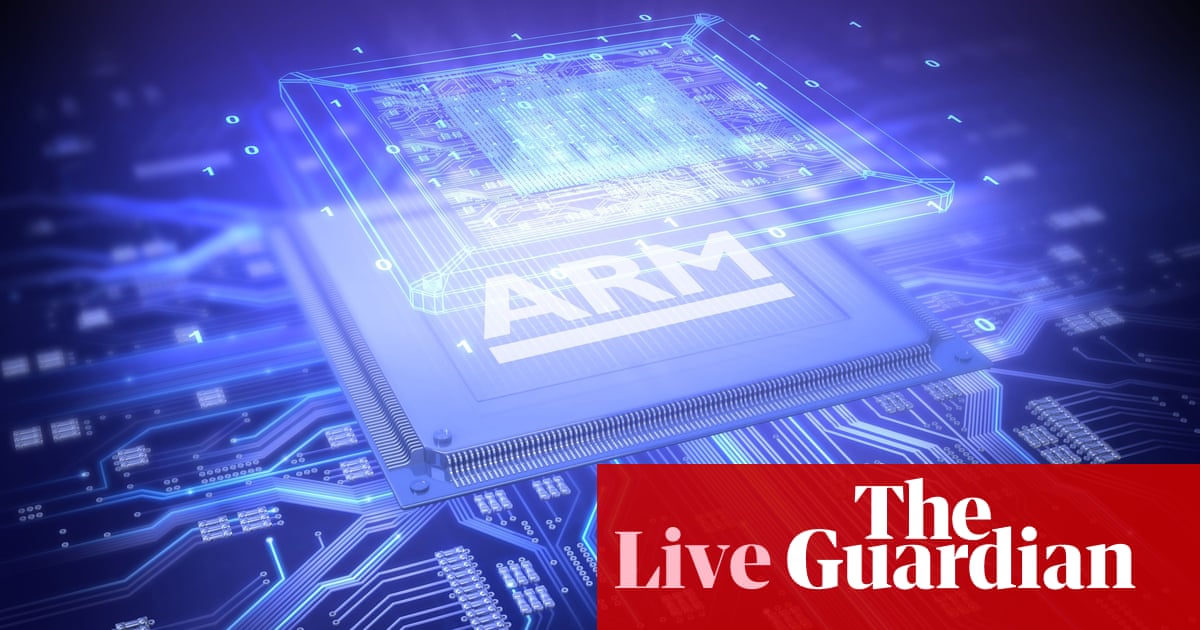 Stock markets across the Asia-Pacific region rallied today, with Softbank leading the way.

Shares in Softbank jumped by 9%, as traders applauded the sale of Arm to Nvidia.

The wider Topix index of Japanese stocks gained 0.9%, with the upbeat mood pushing South Korea’s market up 1.4% and China 0.5%

“This is a UK company, it’s clearly in the national interest that it stays a UK company, so the government clearly has the power to prevent that [the deal]”

He called on the UK government to help launch ARM back on to the London stock exchange “and make it a British company again” (Softbank took it over in 2016).

Hermann Hauser, ARM’s co-founder, says the sale of ARM to a US firm was an “absolute disaster for Cambridge, the UK and Europe”.

He warned that it would lead to job losses in the UK, destroy the UK firm’s business model and impinge on UK economic sovereignty. Any promises made on jobs are “meaningless unless they are legally enforceable,” pointing to the takeover of Cadbury by US company Kraft in 2010.

“The headquarters [will] move to the United States as they inevitably will when ARM becomes a division of Nvidia. This will lead to job losses in Cambridge, Manchester, Belfast, Warwick where ARM employs thousands of people.

Secondly, Nvidia will destroy ARM’s business model… which is being the Switzerland of the semiconductor industry of dealing with over 500 licensees, most of which are competitors of Nvidia.

The reason why ARM has 95% market share of mobile phones in the world is because there’s a lot of competition between the 500. If this will now be done by a single company there is a monopolies problem.”

The third reason, he said, was “by far the most concerning,” the impact on economic sovereignty for the UK. If ARM becomes a US company, it will come under US regulations, he warned.

“Which means that if hundreds of UK companies that incorporate ARM in their products want to export it to anywhere in the world including to China which is a major market, this decision on whether they are allowed to export it will be made in the White House, and not in Downing Street.”

The City has woken up to an dealmaking frenzy this morning, with three tie-ups with serious ramifications well beyond the markets being announced.

Firstly, video platform TikTok has plumped for a ‘technology partnership’ with enterprise software giant Oracle, rather than selling its US operations as president Donald Trump had demanded.

At first glance that looks like a win for Oracle’s Larry Ellison over Microsoft — but it’s not yet certain that the tie-in will be approved.

The Washington Post reported that Oracle had been chosen by ByteDance as a ‘“technology partner” to allay US concerns, and Reuters quoted a source as saying it would be a restructuring rather than a sale, with Oracle handling TikTok’s US user data. The source did not disclose how much of TikTok’s US operations ByteDance and its investors would continue to own.

ByteDance will need approval for the deal from both Washington and Beijing. It is not clear whether Trump, who wants a US technology company to own most of TikTok in the United States, will approve the proposal.

TikTok: ByteDance ‘to partner with Oracle’ in US after rejecting Microsoft bid

One of Britain’s most important technology companies is also changing hands, in a controversial deal.

US tech giant Nvidia has just finalised the $40bn acquisition of ARM, the UK-based semiconductor designer, from Japan’s Softbank.

ARM is a real UK success story, with a heritage dating back to Acorn Computers, whose BBC Micro helped teach a generation of children how to get to grips with computers and coding (some, ahem, better than others).

Its chip architecture is used in virtually all mobile phones today, and will power the next-generation of Apple Macs too.

Nvidia insists it will expand Arm’s R&D presence in Cambridge, UK, by “establishing a world-class AI research and education centre”. But a backlash is underway, with the firm’s founder worried that jobs will be lost, and that Nvidia will destroy the firm’s business model of licensing its intellectual property to chipmakers.

Thirdly, American biopharmaceutical company Gilead is acquiring cancer drugmaker Immunomedics in a $21bn merger. Gilead is most famous for its Remdesivir treatment for Covid-19, but this deal will expand its cancer treatments.

“Trodelvy is an approved, transformational medicine for a form of cancer that is particularly challenging to treat.

We will now continue to explore its potential to treat many other types of cancer, both as a monotherapy and in combination with other treatments.

European stock markets are expected to open higher as investors digest this flurry of news. There’s also relief that AstraZeneca has resumed trials of its Covid-19 vaccine, after a brief pause last week after a triallist fell ill.

We’ll be tracking all the action through the day.