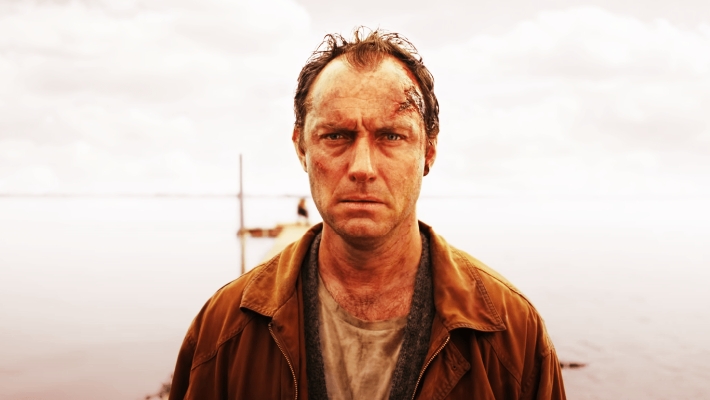 As you doubtlessly know as a conscious person living in the world right now, horror comes in many flavors, each differently bitter and lasting and harming. Some are slower to develop but no less strong. Dennis Kelly’s The Third Day limited series is committed to that idea, mixing and matching and slow playing with unsettled people awash in desperation and the monsters that lurk behind smiling faces in sedate places. And grief and longing. Let’s not forget those two. Planned as a six-episode limited series on HBO (a UK co-production), The Third Day (which debuts on HBO at 9pm on September 14) splits its story across seasons of the year. First is Summer, encompassing episodes 1, 2, and 3. Then there’s Winter. In the middle, however, is an interesting thing created in collaboration with Punchdrunk that series star Jude Law describes as an opportunity for fans of the series to discover Easter eggs. But it’s constructed as much more than that, lasting 12 hours as a live installation that had to pivot quite grandly from its original plan as an in-person festival celebrating the creepy island at the heart of the series. But pivot they did.

We spoke with Law, co-star Katherine Waterston, and director Mark Munden about that celebrating that needed change, the color wheel of fear and horror, and the tightrope of accessing trauma to go deeper in a scene.

Series creator Dennis Kelly had said that he wanted to do something where it’s about fears that run deeper than horror. I’m curious what you take that to mean and how that relates to your interest in working on this.

Jude Law: I suppose I would translate that horror is you could… I’m riffing here, I’m no expert, but I would guess you could say that horror is a guttural, surface reaction to something. Whereas grief and heartache, and really having your spirit or your soul split is something that lives inside you almost like a dead piece of yourself. And I think it certainly from Sam’s perspective, as a character, that’s what he’s trying to deal with. He’s trying to excavate or understand or shed light on this sort of dead section of himself. I guess if that’s an element of the heart of this, then that’s perhaps what Dennis meant about delving into a world that was sort of beyond horror, or a deeper aspect of horror. I certainly think for Sam to suffer from these blackouts and actions that he doesn’t remember, he is in a whirlpool of emotions that trigger him to spiral. That for me, was not actually one of the draws of the part. In fact, it turned out to be one of the elements of the part that I found really, really hard to endure. And then to shed at the end of it wasn’t a nice place to be.

What I was excited about was the opportunity to work with this team of people and to work on something challenging and different. I just talked a lot there about grief and pain and what Dennis Kelly does brilliantly in his writing, and what Mark drew out, was also this humanity and humor. Which are very strange partners to be looking at this stuff with a human eye and with a sense of humor, is a slightly unusual and brilliant perspective. And I think that, if anything, was the element that drew me in the most.

You talk about the burden of carrying that. In the beginning, the very emotional scene where he’s crying, where do you go when you try to access something like that? It’s a really stunning emotional breakdown.

Law: Well, personally, I have to create some kind of an understanding of what the person’s going through. And then I guess you look for trigger points in your own life and your own emotional landscape that you can access. Personally, I have to sort of try and see it as some kind of a therapy, otherwise it’s stuff you hold onto, which you don’t really want to. So, it’s a very personal journey, really, where you go to places that I think you’re scared to go to. Thinking and imagining things that you don’t necessarily want to think or imagine. But like I said, you have to try and see it ultimately as therapeutic rather than a place where you’re indulging or manipulating or abusing those thoughts and feelings. It’s something you touch on. And other things, more immediate things can trigger it, too. Music and ultimately just being in the moment with the character, and trying to understand where they are. And then letting go.

Katherine, what drew you to this?

Katherine Waterston: Everything. The script was brilliant. The team was amazing. I met Mark on a Skype. Remember Skype? It’s so over now. [Laughs] Anyway, I met him on a Skype and I had just flown to New York for a holiday that I didn’t take. I just got turned around and came back to do the show, which I suppose is a real testament to how much you like something.

There was just nothing about it that didn’t draw me in. I read it like I imagined an audience would watch it. I couldn’t stop reading it. It was really exciting. I didn’t know where it was going. The characters did unexpected things that surprised me. They were complex. These are the things I generally look for. And then, to work with Jude, and to work with Emily (Watson), and Paddy (Considine), and Naomi (Harris). There are just so many elements that drew me to it. This live event, doing something that’s never really been done before, finding out what that will be, getting to be a part of that. So, one of the secret pleasures of being in this business isn’t… The obvious pleasure is getting to play these certain roles and experience these challenges, but there’s this little extra bonus people don’t talk about too much. Just getting a front-row seat to something. Getting a front-row seat to how Mark works, or getting a front-row seat, to the way we rehearsed together, or how Felix (Barrett) works from Punchdrunk.

There is this element to all of this. It satisfies curiosity to get to be a part of these collaborative projects. And so, I guess for me, I do tend to start with the character because if I don’t see how I could play the part, then I’m of no use to anybody. But after that, it’s who are the people and what are we going to be making together? And it was just such a lush group. It was just so appealing. So yeah, it wasn’t hard to make the decision.

It’s going to take a little more time to get to the sense of who your character is. More than the first episode. It seems like your character is a harbor in the storm for Jude’s character, but I’m imagining that may not necessarily be the case. Can you shed some light on where the character goes?

Law: Not without giving anything away!

All right. That’s a good answer though.

Waterston: Yeah. So tempting. This happens to me a lot. I don’t know why I play people and I can’t talk about it.

Mark, can you talk about the status of the live element through Punchdrunk? What happens now with everything? How does that proceed?

Mark Munden: We have the summer block (the first three episodes), which ends up with a pretty dramatic ending in episode three. And you would have seen the beginning of the winter block with Naomi and things. And this is a 12-hour single camera installation film of the day of the festival that they’ve been preparing. You see a little bit of that in episode one, when Sam first arrives at the island. In episode two, you see a longer rehearsal for this festival and things. And so the live element is the festival itself. And so it’s the preparation for the festival. And it’s this… I can’t really tell you too much about the festival because it will depend on what you know in episode three, but it’s about how this thing develops over the day and the knock-on effect it has on the second block.

So even though you can watch the two blocks without seeing the autumn section, you can see that as well. And it’s really a mixture of the high drama of the festival, but also an opportunity for us as the audience to spend intimate long periods of time with people that we’ve known from the summer block. So it might have a lot. It will have elements of extreme, slow cinema. We watch Sam sleeping for 25 minutes or we watch Jess thinking about what is going on in her head, what is going on with Jess at this point? But it’s totally nonverbal. And so there’ll be elements of slow cinema there. And also sort of documentary elements, because it’s about preparing for this festival in some sort of way. So it’s stuff that we can’t do on TV and that’s what’s challenging to the audience as well. As well as having an interactive element in terms of, is that supposed to happen or not? It’s a fragile live thing.

Did the shape of it change at all with COVID and everything in terms of filming?

Law: Originally we were going to invite like 2,000 people to the island and have them be a part of the festival. That obviously ain’t happening anymore! [Laughs] But in a weird way, there was always a slight worry I had that would exclude certainly folks across the Atlantic and Europe, across the Channel. But this way it’s become one of the few things that have grown out of this extraordinary time that we’re all living in, where rather than just pack up and say, “Well, we won’t do it.” It’s like, okay, how do we do it? And I’m now, sort of championing where it is and what it’s turned into. Because, in many ways, just like we’re now doing… I’ve never done a junket like this before. So in a way, it’s that I’m here, this is live. I’m here and you’re there wherever you are. And it’s like, let’s celebrate that in a way. And so let’s celebrate this as a piece of live theater, but also as Mark said, sort of a weird art piece that’s also related to the series, which is a piece of television.