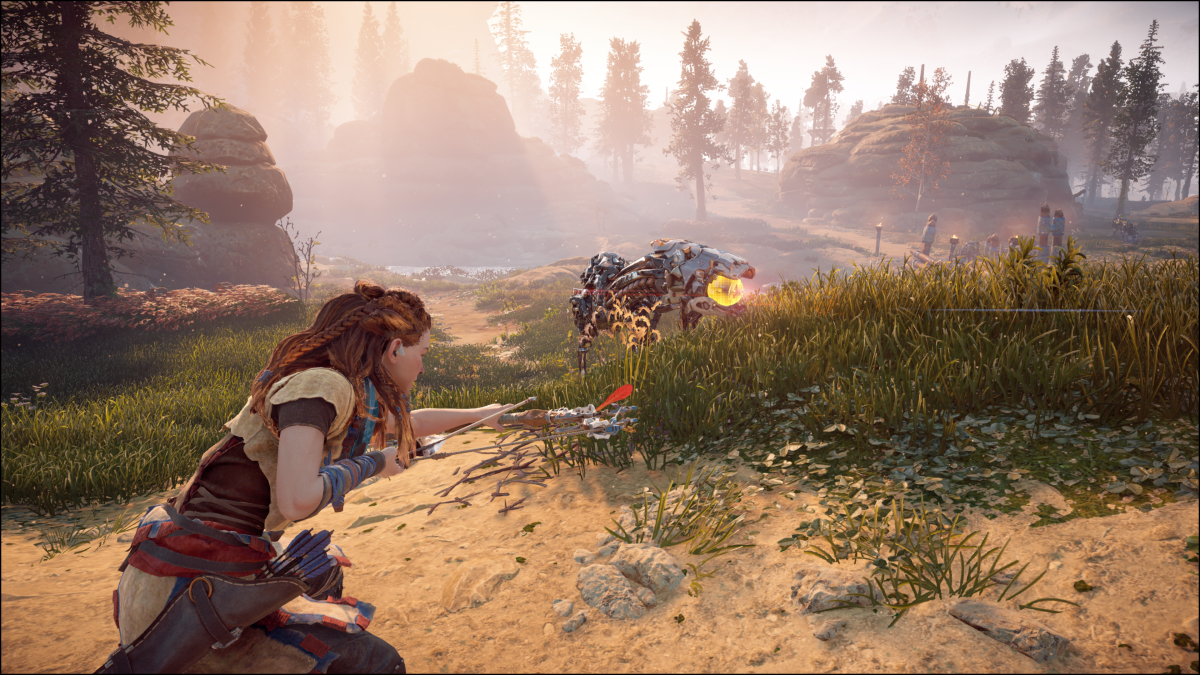 Horizon Zero Dawn’s combat has similar beats to the combat in a lot of open world action games, but it’s unique in the way it puts you constantly on the back foot and demands that you take your time, methodically learning how each weapon works, setting traps, and silently stalking your opponent rather than rushing in and obliterating them.

To newcomers, it can take some getting used to, but once you find Aloy’s rhythm, slaying the machines becomes much easier. While the bow and arrow is required weaponry—not literally, but certainly practically—there are a number of other weapons you can use to play Aloy your way while still staying true to her hunter-gatherer design.

If you’re new to the game and wondering where to start, these tips will make you the pride of the Nora in no time.

Find a playstyle that suits you

I’ve spent over 100 hours in Horizon: Zero Dawn across various playthroughs, and I only used a Tripcaster a handful of times. However, I know people in the community who swear it’s one of the best weapons in the game, and neither of us are wrong.

Think about what weapons suit your Aloy and your playstyle. Tripcasters require patience, spatial awareness, a viable spot to be placed, and demand you lead the machines towards them, while trying to avoid getting hurt yourself. For me, tying them down with Ropecaster or launching a bomb from a Sling was more effective. The important thing is to try out each weapon you get and see how each of them work for you.

The value of scanning enemies cannot be overstated. Scanning reveals an enemy’s immunities, vulnerabilities, and weak points, and allows you to tag them and see their walking pattern. Tagging an enemy means an arrow will constantly flash above their head, so you can stay aware of where they are. You can tag multiple machines at once, so don’t hold back.

Regarding walking patterns, knowing where the machines are going lets Aloy hide in wait in the long grass. When a machine comes close enough, she has two options: Silent Strike or Override. Silent Strike needs to be unlocked in the Perk menu and Override is a skill you learn in the story, but both can and should be obtained early on. Silent Strike will kill smaller machines in one fell swoop, and can be a good choice for quickly clearing your path of minor machines while scooping up resources. Most times though, Override is the better option, as you can use it to make the machines fight each other, leaving them all destroyed without Aloy picking up a scratch.

Another thing the scan reveals will be the strengths and weaknesses of each machine. These will determine what elemental attacks you should use; you will unlock weapons which have specific elemental attacks as the game goes on, and will also gain modifiers which can give standard weapons better damage in certain categories.

Once you scan the machines, it’s fairly self-explanatory. Use fire elementals if the machine is weak to fire, but don’t if fire is its strength. Over time, you’ll get used to the more common enemies and will know their weaknesses by heart, which is handy if you forget to scan or get caught in an ambush. In the early game though, make sure to practice scanning.

Aim for the weak spots

The final hint scanning reveals is the weak spot of any machine. Much like the elemental weaknesses, these will likely be committed to memory eventually. Until then, scan them, and weak spots will glow yellow. Typically, they’re exposed areas, like the glassy eye orbs, fuel tank, or more peripheral parts on the top or side. They’ll flash purpley white when hit, so you’ll know your attack is on target and you’re dealing extra week spot damage. With enough hits in the same place, you can even knock certain parts clean off, which is especially important for the next top tip.

Most of the machines will charge you, and damage you by headbutting, trampling, clawing, or biting you. Occasionally though, some of the biggest machines come with cannons mounted on their backs, and there’s a few reasons why the cannons should be the first thing you target. For one, they are cannons, and do serious damage to Aloy, so taking them out is a defensive strategy.

Secondly, once a cannon has been torn off, it’s yours for the taking. Run up to it and grab it to start firing back. Ammo is limited, but a machine cannon can quickly turn the tide of a tussle. It’s worth noting that the Tearblaster weapon will rip cannons off in a single shot, but you won’t unlock this weapon until you’re way past being a beginner, so it doesn’t really apply here. Instead, use Tear mods to increase your chances of ripping a cannon off.

You’d be forgiven for thinking all this advice to aim for cannons and glass eyes is worthless when you’re a beginner struggling to shoot straight. But fear not! The Focus perk can be used to slow down time when Aloy is aiming, making those difficult shots significantly easier to land. Keeping your distance and keeping hidden will also help, as the machines will move far less when they don’t perceive a threat nearby.

It’s the night of the hunter

As well as the machines, there are a handful of actual animals in the open world too. Rabbits, boars, turkeys, fish… none of these wild animals will attack you, but unfortunately you still need to kill them. Most of the time, you’ll be able to gather meat from the kills, but what you’re really looking for are bones and skin. These are rare – for some reason – but are required ingredients for several crafting upgrades and for trading with merchants for weapon upgrades. It’s better to hunt as you go, gathering resources especially when the resource indicator is blue or green, rather than to wait for when you need turkey bones and have to spend an hour stalking the walking bird.

PC Gamer created this content as part of a paid partnership with Sony. The contents of this article are entirely independent and solely reflect the editorial opinion of PC Gamer.