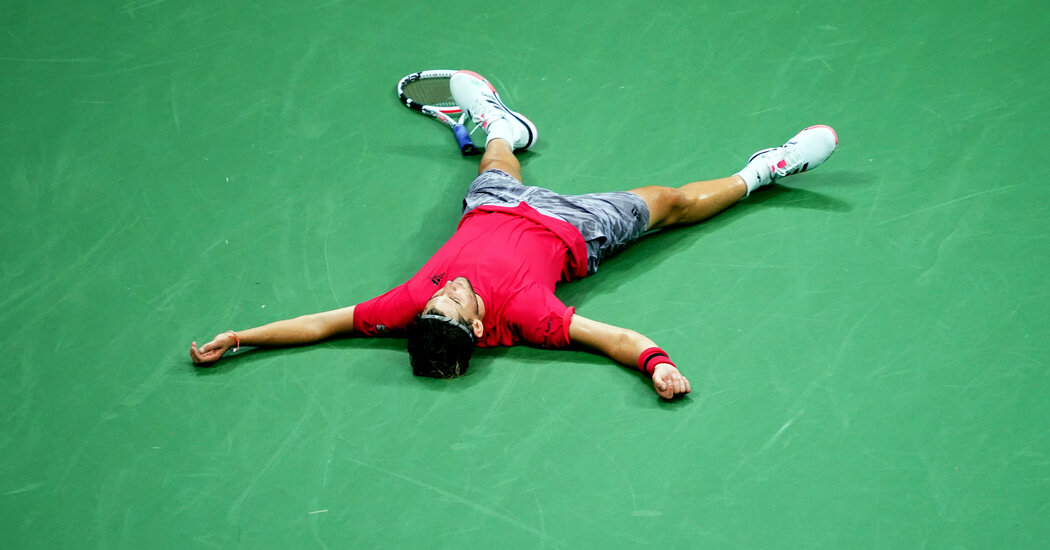 Grand Slam tennis is back.

In a wild comeback that seemed both improbable and predictable, unlikely, lost and then found, Dominic Thiem battled from two sets down to win the United States Open on Sunday night over Alexander Zverev, 2-6, 4-6, 6-4, 6-3, 7-6 (6).

Thiem edged Zverev in a fifth-set tiebreaker that capped a four-hour marathon that included golden opportunities for Zverev to win and left both men battling cramps in the final moments.

Thiem, a 27-year-old Austrian, won his first Grand Slam tournament in his fourth major final, and it could not have been harder. A critical distinction was that this time neither Rafael Nadal nor Novak Djokovic stood on the other side of the net.

One of a group of promising players in their 20s who have long failed to topple the aging but often indomitable Roger Federer, Nadal and Djokovic, Thiem became the first currently active player in his 20s to win a Grand Slam event. He is the first new Grand Slam champion in six years. With Zverev serving for the match at 5-3 in the fifth set, Thiem won the first two points to put the big German on the ropes, then forced him into one too many errors as Zverev could not close the door for the championship.

While this tournament may always be known for the absence of Federer and Nadal and Djokovic’s disqualification for hitting a line judge with a ball, Thiem’s name will be etched in the same font as past champions. There was no discount on his $3 million winner’s check.

The game’s ultimate pressure cooker, a fifth set tiebreaker, was a microcosm of the match itself. Zverev took an early lead, Thiem battled back to take control, then Zverev fought off two match points to knot it at 6-6. But Thiem slammed one last searing forehand winner and Zverev sent one last backhand wide to give Thiem the championship.

Thiem collapsed when it was over. Minutes later, Zverev broke into tears during the trophy ceremony as he thanked his parents. “It’s just tough you know,” he said. “I wish one day that I can bring the trophy home.”

“We both deserved it,” Thiem said.

Under a clear sky and an unfortunately empty Arthur Ashe Stadium because of the coronavirus pandemic, Zverev, for two sets rode the power of his first serve and limited his errors in a crisp, efficient performance that belied his reputation as a player prone to inconsistency in the biggest moments despite his immense athletic gifts.

Thiem, who had cruised through the tournament with frightening precision, struggled to find his rhythm, missing long and wide on shots that had pasted the lines for nearly two weeks.

Watching a top player lose a two-set lead with a Grand Slam on the line is like witnessing someone undergoing a cruel form of psychological torture. There were hints that Thiem could come alive and Zverev would combust before either of those two events happened.

Zverev’s game began to show cracks late in the second set, when he missed an easy volley and then double faulted. He took the set on his next serve, but the faltering reminded Thiem (if he indeed needed reminding) that Zverev had never closed one of these Grand Slam finals before because he had not played one.

Then, early in the third set, Zverev missed another easy volley on a break point and Thiem had his lifeline. Swinging with the freedom of someone with his back against the wall and nothing to lose, he began finding his targets and forcing Zverev to win points on his own.

As he took a seat after losing the set, Zverev sat across the court and looked at his coaches, his eyes wide open. Was this really happening?

It was. Eight games later, Zverev would double fault at deuce and send a soft forehand into the middle of the net to allow Thiem to serve for the fourth set.

Quickly, it was all tied up, and Thiem outlasted Zverev in the tense final games.