Broadcast in 1968, the original episodes are long lost, but have been given a new lease of life as the latest BBC Studios release to marry the surviving audio soundtrack of the original show with newly created animations.

Generally well-regarded by fans, Fury From The Deep follows a pretty standard model for the era. The Tardis lands somewhere near a military/industrial complex – in this case an off-shore gas-drilling operation – where something mysterious is going wrong, and only the Doctor and his companions can help put it right.

It also has a fairly generic set of stock 1960s Doctor Who characters. There’s the gruff leader of base operations who refuses to accept that anything is amiss, and the baffled scientist slowly believing the evidence but who feels powerless to intervene. There’s a brusque no-nonsense risk-taking expert constantly demanding more action, and the dry bureaucrat sent in by the board to work out what the hell is going on.

Frazer Hines’ Jamie is, as ever, an enjoyable foil to Patrick Troughton’s Second Doctor. Deborah Watling fares less well in this story, as Victoria is very much reduced to being a powerless victim of events that needs repeated rescuing, screaming, or sitting around moping that they never visit anywhere nice. Having faced the Daleks, Cybermen, Ice Warriors and the Yeti (twice) in her previous stories, she maybe has a point.

Fury From The Deep teaser trailer

A comparison with the fleeting surviving footage of the story – all of which is included on the discs – reveals that in places the animation perhaps struggles to convey the unworldly menace of the original. The scenes where humans controlled by the deep sea menace are gassing people into unconsciousness were so unnerving that the Australian censor cut them. Considered unsuitable for the nation’s children, they never gave them back, and that’s the only reason these bits survive. The original footage is genuinely creepy, but the animated characters of Oak and Quill come across more as a slightly comical double-act in cartoon form, rather than silently terrifying.

Where the new production does excel, however, is firstly in the beautiful detail in the backgrounds. Secondly, as with The Macra Terror animation, the format also allows them to escape the limitations of 1960s budgets, sets and props. There’s no seaweed wired-up to make it twitch as if it was alive here.

For fans who haven’t been particularly impressed with the animation style used for Doctor Who stories previously, the faces are notably more adept at conveying emotions in this release, particularly in a tender scene between Victoria and the Doctor. 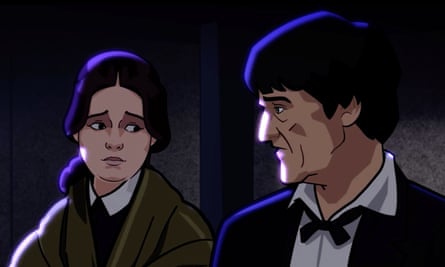 The lighting and facial expressions in the animation are a step up from the BBC’s previous Doctor Who releases. Photograph: BBC Studios

Beside having the animated version of the six part story in both colour and black & white, the set includes documentaries about both the making of the animation and the original. There’s also some rare 8mm behind-the-scenes footage from the 1968 production, and the welcome curiosity of the inclusion of radio sci-fi story The Slide, also written by Victor Pemberton. It started life as a pitch to the Doctor Who production team in 1964, was made for radio two years later, then served as partial inspiration of his later scripting of Fury From The Deep, and features Roger Delgado, Maurice Denham and Miriam Margolyes among the cast. Delgado would later go on to play the Doctor’s nemesis the Master against Jon Pertwee.

Fury From The Deep itself is a solid slice of 60s Doctor Who. Due to having a much stronger and scarier plot at its heart, the animation is far more watchable than the other story recreated by BBC Studios and released this year – The Faceless Ones. If you are unfamiliar with how the story plays out, it has some gripping and unexpected turns. With little prospect of the original episodes ever being returned to the archives, it is the closest any fan today will ever come to being able to experience the terror that foam and seaweed could inspire in children, and some adults, in 1968. As the character Van Lutyens puts it in the story: “It’s down there. In the darkness. In the pipeline. Waiting.”

Doctor Who: Fury From The Deep is available now on DVD and Blu-Ray.