“To return is to win,” runs the slogan on the tape across the top of the stairs at the Ramón de Carranza stadium in Cádiz, another line that can’t be crossed. At the bottom, the gates are locked, but outside a stall still sells scarves and hats in bright yellow, and two Osasuna supporters sit at a table in front of Bar Gol where footballs hang from the ceiling and photos cover the walls – icons of the club they’ve come to visit. Juan José Jiménez with his beard and magnificent mane, named Sandokan after the pirate. David Vidal, the loveable lunatic they’d invent if he didn’t exist. Mágico González, who Vidal proclaimed “technically better than Maradona”: as much myth as man now, the most cult of heroes. And the fans: a riot of colour and noise.

Well, normally. A few metres away, some have gathered on a warm Saturday evening, the beginning of a night they waited so long for, or never saw. A dad and his little boy, a mum and her littler girl, a podgy kid wearing a faded Cádiz T-shirt with Ché Guevara on and waving a flag bigger than he is. Teenagers with tops listing fans’ names like tour dates. “Cádiz are a first division team,” it says, which they are now 15 years later. A man holds a cuddly toy in a curly blue wig and a face mask. He’s in his promotion T-shirt from the last time Cádiz came back and the flag he unfolds is 40 years old. A couple of dogs.

Eventually, the buses – two for every team now – roll up. The fans cheer and applaud as the players get off, half an hour before kick-off and halfway into their kit, ready for the return to primera. And then they go home. 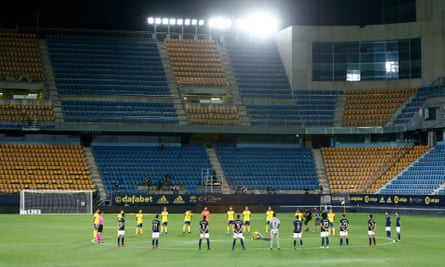 Inside the stadium where the game they can’t go to will be played, passages are empty, chairs stacked up in doorways, stands taped off, shutters down and turnstiles covered. None of which is new, sure. It’s been six months since lockdown and everyone knows stadiums remain shut to them, knows why and finds joy in football still. But stadiums are not supposed to be empty – it still matters and shouldn’t be forgotten. Especially on a night like this. The opening day of the 2020-21 season is “the most long-awaited day”, one local paper says, “written into the calendar in golden letters”. A day Cádiz president Manuel Vizcaino insisted “seemed impossible not so long ago, the day we rub our eyes when we see our team in the first division – the day that you realise it was all worth it.”

The last time Cádiz began a season in primera was August 2005. They went straight down again and might never have been back. They might never have been at all. They slipped into Spain’s regionalised Segunda B with its four divisions, total lack of money and torturous route out. There were battles, crises, and they almost went out of business. But under Álvaro Cervera, who took over as coach when they were still in Segunda B, they were finally back. Except it wasn’t quite the way they had dreamed it.

Fans, especially our fans, deserve to enjoy their team in primera

Discouraged from gathering following heavy criticism for coming together for a wild, impromptu promotion party in July – stickers declaring “health and Cádizism” appearing around the city – there were barely 60 or 70 of them pre-game and during it there were none. That would have been tinged with melancholy for any promoted team; being Cádiz, somehow, it felt even worse. Every club is defined by its supporters – the Alavés banner declaring “it’s not titles that make a club great, it’s its people” is applicable to all of them – but that’s especially true at a place were there is only one statue outside the ground and, rather than a player, manager or president, it is dedicated to the fans.

Cádiz is a club that’s almost universally popular, the most welcome of additions to primera, a reflection of a unique city. On the way into the stadium there is a phrase painted on the wall, attributed to the former editor of AS: “Whoever is against Cádiz is against humanity.” Home of Spain’s first constitution and biggest carnival, laid-back and liberal, there was something in one local columnist suggesting fans pull on their best clothes for this weekend: swimming shorts, T-shirt and flip-flops. There’s a reason why players like Mágico were so embraced – as fond of life as he was of football, as likely to fall asleep on the beach as come alive on the pitch. This is a city with soul and a ground where that’s expressed, a place where songs are silly and chants comic, where causes are supported and football is what it’s supposed to be: fun.

One way of explaining is through the man who embraced them and to whom they paid homage upon their return. Michael Robinson always said that Cádiz was his favourite city, “a place where the laws of capitalism don’t apply, it has the most humble, open people: they’re spontaneous, natural and love football”. The kind of people that made El Día Después, the TV programme he directed and which he described as “an X-ray of society, a communal feeling, a programme for everybody”. A place he made his own: Balthasar in the Kings Parade, a director at the club, Michael was named the city’s adopted son. “My father would seek any excuse to say he was from Cádiz,” his own son Liam said last week. “And in the spring, he told me: ‘we’re going up’.”

At last they did but Michael passed away in April and didn’t live to see it. A day of mourning was declared in the city and when the fixtures came out, Cádiz’s first game back was against Osasuna, the team he played for, and on Canal Plus, the television he worked for. It was an opportunity to express what he meant to them all, footage filling the giant screen before kick-off, Cádiz wearing T-shirts declaring “always, Robin”, and flowers laid in the clubs’ colours. As they were removed, one fell. A single yellow rose lay on the grass all game – a poignant image still less powerful than the absence of those Michael held most precious, giving meaning to it all: the people.

AS had called it “the game Michael dreamed of”, but it wasn’t, not like this. And nor did it turn out the way the team hoped. With a starting XI including only one new signing – Álvaro Negredo – and eight footballers who have never played in primera, Cádiz were beaten by two tidy goals. Oier Sanjurjo’s brilliant pass released Adrián González for a gorgeous opener, before Rubén García rolled his defender to acrobatically take the second. Cádiz, though, were complicit both times. “That’s the difference between the first division and the second,” said assistant manager Roberto Perera. “In the second division, you make a mistake and don’t always pay; in the first you make two and they score both.”

The through ball from Oier took the Cadiz defence out of the game, and there was no mistake with the finish from there 👏 pic.twitter.com/28iXShPnbC

La Voz de Cádiz called it “the implacable law of primera”, noting: “Cádiz return sadly, with defeat. They went back to school, and found all their classmates were suddenly bigger, older, and smarter.” Diario de Cádiz described it as “tragicomic”, “a dreadful start from a team that looks like a second division side, one crying out for signings”. Inside, one columnist insisted: “You could see it happening and it happened: they’re still mentally and practically in the second division. The worst thing wasn’t the defeat, it was the sense of inferiority, the lack of ideas, that their opponents won without putting a hair out of place. This needs a major fix if Cádiz are to avoid making fools of themselves.”

But that was harsh. There were extenuating circumstances, although not all of them are easily resolved. Cervera was isolated at home with Covid, Alex Fernández had previously tested positive and appeared late on, and Jeremías Ledesma caught the virus too. “It’s been an accident-filled pre-season with lots of set-backs,” Perera admitted, “we still need players to come, but the market’s not moving.” Cádiz also have the division’s smallest budget and 36 players, half of which they need to move on still. Then there’s the stadium itself, so often important for new arrivals. “Playing at the Carranza has always been a weapon,” Perera said. “In a normal season we would get beaten once at home, but without our fans [last year] we only won one.”

Not that it’s the maths, it’s more. It’s everything, the whole point of being back in primera in the first place and the reason everyone else wanted them back. It’s not the game Cádiz lost; it’s the night, the occasion, the experience, the risk that the season they waited so long for could slip away in silence. “It’s a pity,” Perera said. “We all know what the Carranza would have been like: after so long without being in the first division, it would have been something mad. That’s for sure. Fans, especially our fans, deserve to enjoy their team in primera, but the world and football is the way it is and all we can do is carry on.”