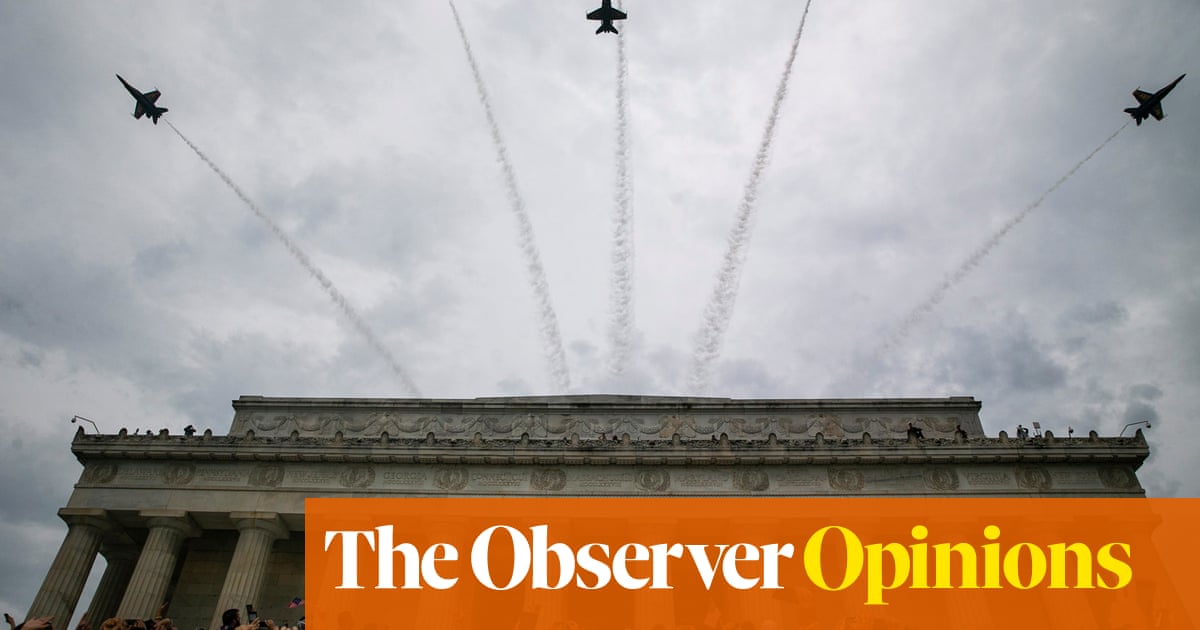 The row over Donald Trump’s reported denigration of US soldiers killed fighting for their country as “suckers” and “losers” illuminates a bigger truth about his time as commander-in-chief: he has repeatedly disparaged America’s military leadership and exploited its armed forces for selfish political purposes, at home and abroad. His alleged foul-mouthed contempt for the sacrifices and safety of rank-and-file servicemen and women, and the generals who lead them, matches his breach of faith with military allies around the world.

Little better illustrates Trump’s reckless attitude than his response to Iran’s missile strike on a US base in Iraq in January. The attack was in retaliation for his provocative assassination of the Iranian general, Qassem Suleimani.

Panicked that he may have triggered a full-scale war, Trump played down the resulting injuries to US personnel, claiming a handful had “headaches and a couple of other things”. In reality, more than 100 troops suffered traumatic brain injuries – a disaster Trump has never fully acknowledged.

When it emerged in June that Russian military intelligence had offered bounties to Taliban-linked militants to kill American and British troops in Afghanistan, Trump denied all knowledge, disputing credible reports that officials had briefed him months earlier. He also declined to take action against Moscow. Trump displayed similarly lethal insouciance last year when, to their mortification, he ordered US troops in northern Syria to desert their Kurdish allies and abandon the allied campaign against Islamic State.

Trump has abjectly failed to fulfil a key 2016 pledge – to extricate America from “endless” foreign wars. Four years on, many troops remain in Iraq and Afghanistan. At the same time, Islamist extremists have been emboldened by unilateral US disengagement that has left local allies dangling. Newly begun, US-directed peace talks risk handing Afghanistan back to the Taliban, nullifying the sacrifices of thousands of allied and Afghan troops. Peace with honour is meaningless to Trump. He trades peace for votes.

Nothing sticks to Donald Trump. But could this be an exception? | Emma Brockes

Rather than bring the troops home, Trump has significantly increased US deployments in the Gulf, to deter an Iranian threat exacerbated by his obsessive efforts to topple the Tehran regime. In effect, Trump has put Americans in harm’s way to defend corrupt Arab autocrats, increase US arms sales, and boost Israel’s rightwing rejectionist leadership. At the same time, he deliberately undermines more important alliances such as Nato, and those with Japan and South Korea.

The Atlantic magazine’s explosive report on Trump’s defaming and mockery of the armed forces, which he angrily denied, finds an echo in a new book by journalist Bob Woodward. “My fucking generals are a bunch of pussies. They care more about their alliances than they do about trade deals,” Trump is quoted as saying. Asked about his comments by Foreign Policy magazine, George White, a former class-mate and war veteran, said he wasn’t surprised. “In my dealings with him he was a heartless, obnoxious son of a bitch.”

Speaking last week, Trump again attacked the commanders he himself appointed. “I’m not saying the military’s in love with me – the soldiers are, the top people in the Pentagon aren’t because they want to do nothing but fight wars, so that all of those wonderful companies that make the bombs and make the planes and make everything else stay happy,” he claimed. In fact, a new Military Times poll of service personnel suggests surging, across-the-board dissatisfaction with Trump, with 49.9% viewing him unfavourably and many planning to vote Democrat.

It takes a lot to scare American generals. Yet there is palpable anxiety in the Pentagon that Trump may attempt to co-opt the military if November’s election goes against him and he refuses to concede defeat, as many expect. They worry Trump may invoke the Insurrection Act, which he wanted to do in June to quell Black Lives Matter demonstrations, and order troops on to the streets to crush opposition. Trump’s ugly mid-term election stunt in 2018, when he deployed soldiers to defend the Mexican border against an illusory migrant “invasion”, is not forgotten – although the Pentagon rather shamefully went along with it at the time.

Trump’s inflammatory Lafayette Square performance at the height of the George Floyd protests is not forgotten or forgiven, either. He used General Mark Milley, chairman of the joint chiefs of staff, as an unwitting prop in a staged photo-op designed to show he was in charge. Milley later apologised for creating “a perception of the military involved in domestic politics”. Such willingness to abuse presidential power feeds fears of an “October surprise” – a sudden order to mount a military operation abroad, timed to rally national support.

Pentagon chiefs have challenged Trump’s refusal to re-designate army bases named after confederate generals. General Jim Mattis, who quit as defence secretary in 2018, says Trump wants to politicise the military in order to fan the fires of America’s culture wars – and is a threat to democracy and national security. “Donald Trump is the first president in my lifetime who does not try to unite the American people – does not even pretend to try. Instead, he tries to divide us,” Mattis wrote.

Trump’s outlandish behaviour appears to stem from a lack of understanding of basic ideas of duty, honour, loyalty, discipline and sacrifice. According to his former lawyer, Trump dodged the Vietnam draft by simulating a physical disability, and plainly cannot grasp why anybody would risk their life for their country. He has raised the Pentagon’s budget – but for self-serving reasons. He loves big parades, medal ceremonies, and powerful weapons for the reflected glory they bring him.

On Memorial Day in 2017, while visiting the graves of American soldiers who died in Afghanistan, Trump reportedly asked: “I don’t get it. What was in it for them?” Such uncomprehending, incomprehensible ignorance is damning. Only one conclusion is possible. Trump, a man to be pitied as much as he is reviled, is demonstrably unfit to lead.