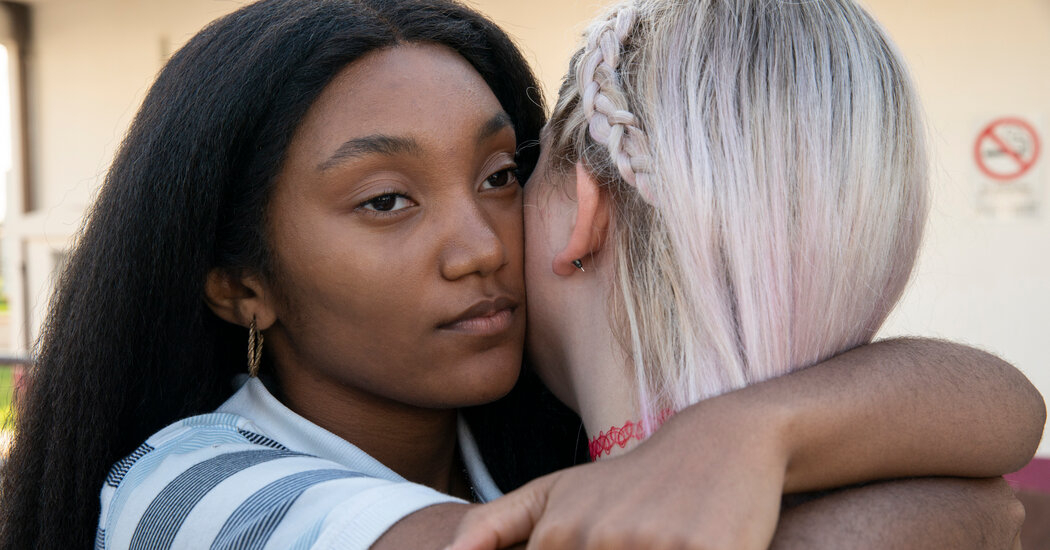 The supermarket at the U.S. Army base in Chioggia, Italy, looks as if it could be anywhere in the world. That’s exactly the point. As Britney (Francesca Scorsese), a teen living on base, explains it to new kid Fraser (Jack Dylan Grazer), all the military stores like it are precisely alike, down to the same items in the same places in the same aisles. “So we don’t get lost,” she says.

Good luck with that. Getting lost is the natural condition of humans, and teenagers in general: You wander, get waylaid, and in the process hopefully find out who you are. That process is the subject of “We Are Who We Are,” the languid, lusty, sun-baked teen drama from Luca Guadagnino (“Call Me by Your Name”) that begins Monday on HBO.

We meet Fraser, in fact, staring at a “Lost and Found” sign at an Italian airport, where he has arrived with his mother Sarah (Chloë Sevigny), the new commander of the base, and his other mother, Maggie (Alice Braga). Sulky and withdrawn under a protective helmet of bleached hair — he would rather have stayed home in New York — he sets off to explore the base and Chioggia, running into a group of Army kids off for an afternoon at the beach.

Introverted and flinchy, Fraser is an unsettling character to enter the story through, with an awkward, defensive personality and hints of a troubled past. At one point he slaps Sarah over a minor annoyance; at another, she accidentally cuts herself and he instinctively puts her finger in his own mouth.

They fight and comfort each other intimately, and his problems seem to frustrate and terrify her. (Sevigny, who made her debut in Larry Clark’s 1995 teen-panic flick, “Kids,” is nuanced and convincing as the commanding officer uncertain on the home front.) But he is a lot of work, maybe more work than you’ll want to invest as a viewer.

But “We Are” opens outward with the second episode, which shows us the same day through the eyes of Fraser’s neighbor Caitlin (Jordan Kristine Seamón, an astonishing newcomer). She’s more settled than Fraser — popular and close to her conservative father (Scott Mescudi, better known as the rapper Kid Cudi) — but is also searching for her place, experimenting with her gender expression and testing her friendships.

As the two meet and form a close, platonic alliance, the focus broadens to Caitlin’s circle of friends — white and Black, Christian and Muslim, American and European, military and civilian, all thrown together in a limbo that’s both America and Italy and yet not wholly either, living a curious existence that’s both tightly regimented and exhilaratingly free.

I’m not sure if this is a realistic portrait either of overseas base life or of military family dynamics, but the uncanniness of the setting feels key to the story. The series’s real setting is adolescence. The physical location is simply an otherworldly backdrop for its flirtations and fights to play out against, like an enchanted wood in a Shakespeare comedy.

It’s funny that it took an Italian director to see the potential in the stories of American military kids. But then again, an American might have been more burdened by the urge to comment topically.

There’s little military politics in the first four episodes (of eight), other than a slowly percolating subplot about deploying soldiers to Afghanistan. And American politics creep in only at the edges, with ads and TV footage from the Trump and Clinton campaigns (the series is set in 2016) and the MAGA hats that Caitlin’s father orders for the two of them, though campaign gear is forbidden on base.

All these touches, so far, feel more like quirkily deployed set dressing than statements. Many of the supporting characters are thinly drawn, and the plot is slight and shaggy. Friends ally and drift apart, arguments whip up and dissipate like summer cloudbursts.

Guadagnino’s gift here is more for atmosphere and emotion, and the episodes burst with them. They’re rich with sun and salt and a touch of melancholy. The camera revels in the Labrador-like energy with which these kids — except Fraser — leap into any available body of water.

There’s a lot of leaping in “We Are Who We Are,” figurative and literal. The young characters make impulsive life decisions with the same energy they use for dangerous, illicit rides on the Army-base zip line. (Guadagnino, who shares the writing with Paolo Giordano and Francesca Manieri, also has an eye for a great visual metaphor.)

All this comes together in the fourth episode, centered on an impulsive, all-night house party. It’s a finely detailed, living fresco of libido and intoxication, all these teenagers inhabiting their bodies as if they were just-unwrapped birthday presents.

Last year, HBO’s teen drama “Euphoria” tried to capture this same sense of chaos but with a glum, dire, shock-the-parents sensibility, treating adolescence like a minefield. “We Are Who We Are” is content, instead, to observe and soak in the vibe, to push in its earbuds, turn up the volume and dance.