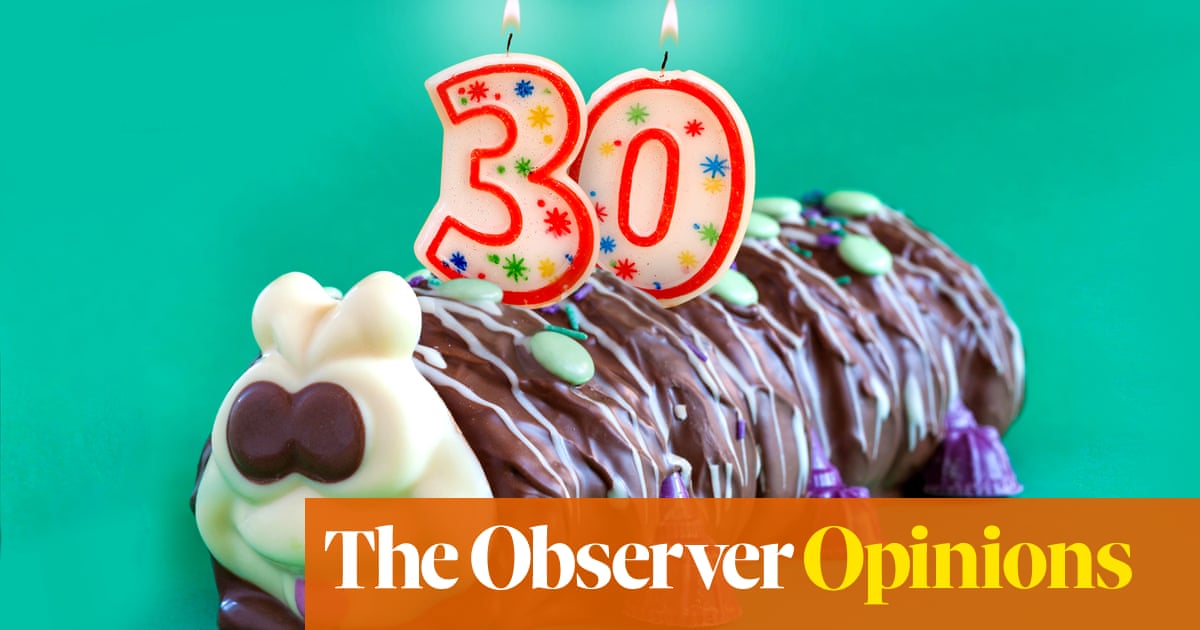 Apparently, we now live in a country that celebrates the 30th anniversary of a swiss roll. It feels like capitalism has eaten us, but we are where we are, I suppose: celebrating the winter return of Starbucks’s red cups and voting on which flavour enhancer manufacturers should put on crisps, so happy birthday Colin, the Marks & Spencer caterpillar cake.

Like his colleague Percy, Colin has entered the vernacular, a corporate national treasure, diversified and brand-extended to the point that we are now exhorted to celebrate his special day with a £25 gift bag, featuring a full-sized “rainbow Colin” and bags of his various children (larvae, pupae?).

Without wishing to denigrate Britain’s best-loved baked good, I’m no Colin superfan. The proportion of sponge to buttercream is unsatisfactory and I believe anyone over the age of six who likes his face – a disc of white chocolate with an unsettling expression – needs to ask themselves some hard questions (such as, “Why am I eating a ‘toughened (sclerotised) head capsule’?”)

I don’t know what it says about British corporate culture that we have co-opted what was clearly intended as a child’s birthday cake for office festivities, but co-opt it we have and at a time when I miss office life more than ever in 10 years of homeworking. Colin is my madeleine.

There has been a lot of tedious rhapsodising from corporate copywriters and Jeremy Hunt about the “fizz and excitement” and “proper bants” of the office recently. I won’t succumb: even quite benign office life involves bone-deep boredom (remember the Frenchman who sued his employer for “boreout”?), hierarchical nonsense and thermostat wars. I estimate I spent 8% of my office career hiding from my responsibilities and 90% staring at spreadsheets wondering when I could respectably go home. But the remaining 2% had moments of shared hilarity and joy, including the ones when an email would appear announcing “X’s birthday cakes are in the kitchen”.

I always felt like Margaret Mead, observing my colleagues around the cake ritual. There are illuminating psychological insights to be had in working out who will linger and chat, who sheepishly hangs back to strip the cardboard base of welded-on chocolate (me) and who brings an apple, a herbal tea and an air of superiority. I especially enjoyed the people who insisted they were frantically busy, but found the time to sweep in for a mini roll as if it were a vital non-disclosure agreement.

I read an article recently about the rise of “ritual consultants” in the US. Described as “borrowing from religious tradition to bring spiritual richness to corporate America”, they are offering religiously inspired ways to generate a sense of shared experience in remote and often alienated workforces. Suggestions included a “smelling ritual”, where co-workers sniff the same common spice to create a “co-sensory experience”; funerals for failed pitches, or everyone “picking up a common object” before a meeting.

Obviously, the chances of most British workers agreeing to sit and hold a spatula before the weekly sales call is slim. But the cinnamon-sniffing highlights a real issue when – despite the frantic-sounding exhortations to do our duty to support rail companies and Costas – most of us are nowhere near an office, or more importantly, our colleagues, most of the time. Even if workers return, many of the usual communal experiences will not: no lift chats or tea runs, no awkwardly pushing a tray next to your boss in the canteen or swift 5.30pm halves eliding into messy regret-tinged evenings (perhaps for the best).

Employers have valiantly tried to offer social events and activities for a remote workforce – quizzes, virtual drinks and bake-offs (“Everyone who was exhausted with childcare, struggling to cope or just trying not to gain 10 kilos told them to eff off,” said one correspondent). But it’s a near-impossible task to replicate the casual and serendipitous with the artifice and awkwardness of scheduled corporate fun.

But we are social beasts and we need ritual – that’s what Colin is all about. And it’s increasingly clear we’re in this for the long haul, so we need better solutions. Perhaps Marks & Spencer could offer individual caterpillar portions, roughly cut to mimic the canteen knife and wrapped in paper napkins, for employers to send to staff. It would be unbearably melancholy but at least it might offer a fleeting taste of office perdu.