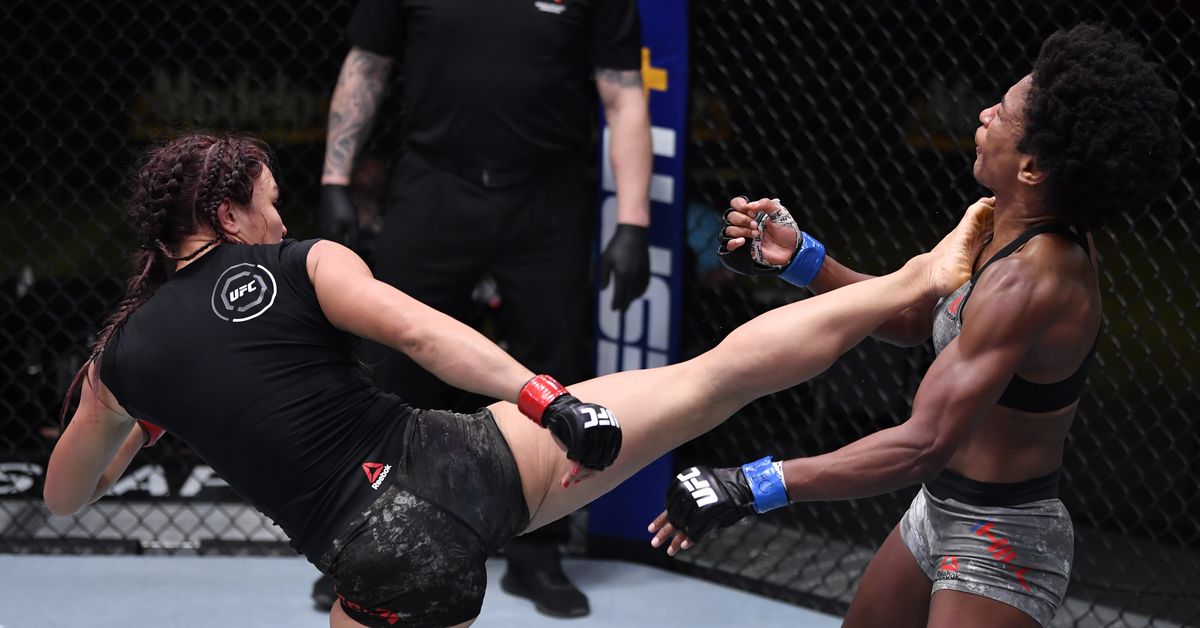 Nothing came easy over five rounds but Michelle Waterson found a way to do just enough to win a hard-fought split decision over Angela Hill in the UFC Vegas 10 main event.

It was a back-and-forth war for all 25 minutes as Waterson and Hill brought the absolute best out of each other on the feet and on the ground. While the decision could have gone either way it was Waterson who scored the victory with two judges giving her the win with cards reading 49-46 and 48-47. The third official gave Hill the fight with a 48-47 score.

“I was confident [in the decision],” Waterson said after having her hand raised. “But we talked about this the whole time leading up to the fight, you never want to leave it in the hands of the judges.”

In her first main event, Hill was on the attack early and often as she came after Waterson with real ferocity, throwing combinations and a powerful overhand right that consistently found a home. By the end of the opening round, Waterson had a mouse forming under her eye and swelling on the same side of her face after eating several stiff punches from Hill.

After starting the fight by throwing more kicks, Waterson decided to test her hands against Hill but that game plan backfired midway through the second round.

With Waterson willing to trade shots on the feet, Hill seized on the opening to unleash punches in succession including one stiff right hand that saw the former Invicta FC atomweight champion’s jaw twist away from her face.

As time passed, Hill was getting even more comfortable on the feet while picking and choosing her strikes. An early exchange in round three saw Hill connect with a punch that immediately caused blood to begin pouring out of Waterson’s nose as she really started to wear the damage done.

With the fight moving into the championship rounds, Waterson looked to show her main event experience by upping her output with a volume striking attack. Waterson was fast with her punches and she connected with several strong side-kicks that landed to the body and head, which kept Hill off balance.

The final five minutes saw Hill as the aggressor with Waterson counter striking with that same side kick continuing to pay dividends. In return, Hill’s best combinations came when she was able to draw Waterson into a boxing exchange, which is when her hands landed on target consistently.

As the fight came to a close, Hill and Waterson decided to just throw down in one last wild exchange with the strawweights embracing after bringing the best out of each other for five rounds.

The judges certainly didn’t have an easy job but ultimately it was Waterson who got the nod while stopping her two-fight losing streak following a pair of hearbreaking defeats to two former champions in Joanna Jedrzejczyk and Carla Esparza.

Overall, Waterson is now 4-2 in her past six fights and after getting a win in the main event, she’s seeking a fast path back to title contention.

“Whoever’s the next contender to fight for the belt,” Waterson said when asked who she wanted to face next. “I want to get to the belt as fast as possible.”