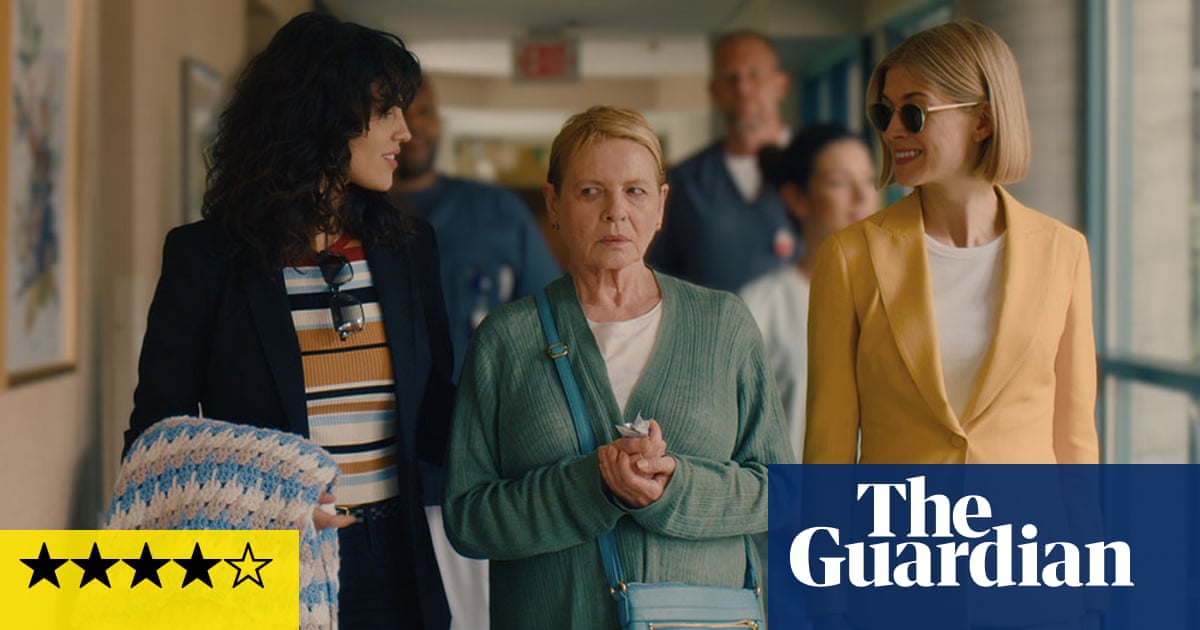 Watching Rosamund Pike slink and vape her way through crafty, cruel thriller I Care A Lot, a trail of acid in her wake, had me scratching my head over just who else could pull off such a specifically, supernaturally savage performance. There can be something inherently unsettling about her otherworldly beauty, something that David Fincher deftly spotted and utilised in Gone Girl, where she combined brittle Upper East Side elegance with the ferocity of the shark from Jaws. She’s not always picked the best projects since, often disappearing in films where she should be forcing her way to the front but British writer-director J Blakeson, who broke out with another crafty thriller The Disappearance of Alice Creed before tailing off somewhat, has landed her with a doozy of a character here, a materialistic and morally vacant antihero, heavy emphasis on the anti.

Pike is Marla Grayson, a pristinely styled legal guardian who uses her position to steal from her elderly wards, a court-approved criminal, working tirelessly and ruthlessly with her girlfriend and partner in crime Fran (Eiza Gonzalez). A network of equally callous doctors and care home managers allows them to seamlessly operate without a hiccup, that is until a new mark threatens to unravel it all. Jennifer (Dianne Wiest) is what they call a ‘cherry’, a cash cow waiting for them to forcefully milk every last dollar, made even easier by her lack of family. But after they strand her in a facility, the pair find that she has some important friends who won’t take her new situation lying down.

I Care A Lot is a bracingly heartless movie, the kind that will repel certain viewers, Blakeson leaving anything close to real humanity on the cutting-room floor, offering us a parade of horrible people doing increasingly horrible things to each other. Marla and Fran find themselves up against a violent pack of gangsters who are more up front about their vicious tactics and a dangerous game begins between both sides, although we’re well aware that there will never really be a true winner. What’s most remarkable about Blakeson’s devilish script is his careful avoidance of excess. It’s a nasty film but not one that feels the need to show off just how nasty it is – like Pike’s electric yet controlled performance, the bile is boiling under the surface only occasionally seeping out. Too often when writers create acrid antiheroes such as Marla, they resort to overkill, so giddily proud of their monsters that they lose sight of the reality of the world around them. Rather than having Marla exhaustingly “shock” those she meets with sour and provocative quips as characters like this often do (cut to jaw-on-the-floor reaction trailer moment), she smoothly and professionally glides from situation to situation, efficiently working the room in whatever way it demands, Blakeson realising that a power-player such as this can’t afford to let her mask slip on the daily. We also see some love, or something resembling love, between her and Fran, and it’s rare to see queerness so casually and coolly inserted into a thriller, a quiet victory the film doesn’t need to make a big deal about.

Marla is very clearly a Movie Character, styled and framed as such, yet she’s one who sneakily plays by the rules of a very real framework, and while the inhumanity of those she works alongside might seem overplayed, Blakeson’s idea originated from a “Google rabbithole” of true stories telling of predatory guardians in the US and the horrifying power they wield. He’s not offering us a sweeping sermon on a corrupt system – his story is too laser-focused for that – but in among the gristle, there’s a stinging reminder of how the elderly are undervalued and targeted. There’s dark humour here but in detailing Marla’s treatment of her latest target, her predicament is played for horror and Blakeson sensitively shines a light on the Kafkaesque nightmare that many are faced with. As the stakes are raised, like a cornered animal, Marla’s claws come out even further, and her abhorrent bullying of an elderly woman makes us question just what we want and expect for such an audaciously vile protagonist.

But Blakeson isn’t interested in making it easy for anyone, not for his characters and not for his audience. Marla’s backstory is elegantly slight as are her real motivations. There’s a half-hearted attempt on her part at explaining away her criminality as revenge against the men who mistreated her but Blakeson doesn’t let her out of the deep swamp she’s swimming in that easily (there’s also a killer throwaway comment about her mother – one of the film’s most darkly funny moments).

Pike is astonishingly good, tearing into her role with the same icy menace that made her Oscar-nominated performance in Gone Girl so indelible and like the script she’s working from, there’s such restraint with her venom that it makes her all the more terrifying. She shares some knife-edge back-and-forths with an affecting and not-to-be-fucked-with Wiest as well as Peter Dinklage, starring as her main nemesis, both trying desperately to compete against an all-time high-scorer. It’s a little overlong, sagging slightly in the last act and Blakeson does rely on a repetitive and sometimes overbearing Reznor and Ross-lite score, but all is mostly forgiven as he caps it off with a delicious final scene.

Going into this year’s Toronto film festival without a distributor, I Care A Lot deserves a swift big money pickup. It’s a major, much-needed win for both Pike and Blakeson, a caustic little treat for those of us who prefer our stories with a spoonful of salt.