Kirby’s shot from the edge of the area in the 15th minute may have flown through the hands of the City keeper Sophie Baggaley, but it was the collapse of the midfield and defence in front of her for the second, third, fourth and fifth goals in the space of nine minutes that cost the travelling side.

Joe Montemurro, the Arsenal manager, had put his side’s 9-1 defeat of West Ham on Saturday down to their extra preparations from playing Champions League football in August, but the score at a fully Chelsea-owned and newly-branded Kingsmeadow did little to quash the view that the gap between the top and bottom of the Women’s Super League is bigger than ever.

Chelsea manager, Emma Hayes, may have recruited Pernille Harder for a world-record fee – the Danish No 10 entered the fray in the second half and added the Blues’ eighth – but it was the more familiar face of Kirby that provided the creative energy that made the breakthrough.

“I’ve been getting some really good feedback from the coaches and the girls,” the 27-year-old had said of her return to full fitness. “They’re saying that it’s like having a new signing. I’ve got the energy now to push on.”

A run into the box down the middle from Ji So-yun saw her desperately scythed down by Yana Daniels and up stepped the versatile Maren Mjelde, playing here at right-back, to fire in the resulting penalty.

A pair of humping headers from a corner then a free-kick by Melanie Leupolz and centre-back Millie Bright respectively, sandwiched a rising long-range effort from the retuning Erin Cuthbert, who was on the bench last week for the draw at Manchester United. 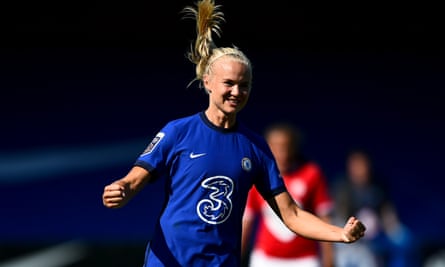 A somewhat regrouped Bristol managed to withstand the Chelsea onslaught for 20 minutes after the restart but in her final action of the game last season’s WSL player of the year, Beth England, added to the tally from close range. Again, Tanya Oxtoby’s side wilted in the early autumn heat.

Niamh Charles scored on her competitive debut after Baggaley had denied Harder, but the Dane made no mistake five minutes later as she linked up with the Australian Sam Kerr and smashed into the back of the net to give Hayes a headache regarding the selection of Kirby or Harder going forward. Kerr then grabbed a loose ball, rounded a defender and grabbed her second goal.

The top of the league is more than stretching away from the rest, which may be good for the English teams going into Europe, but with broadcast deals ensuring there are more eyes on the domestic game than ever before, there has to be some ongoing concern about these hefty scorelines.