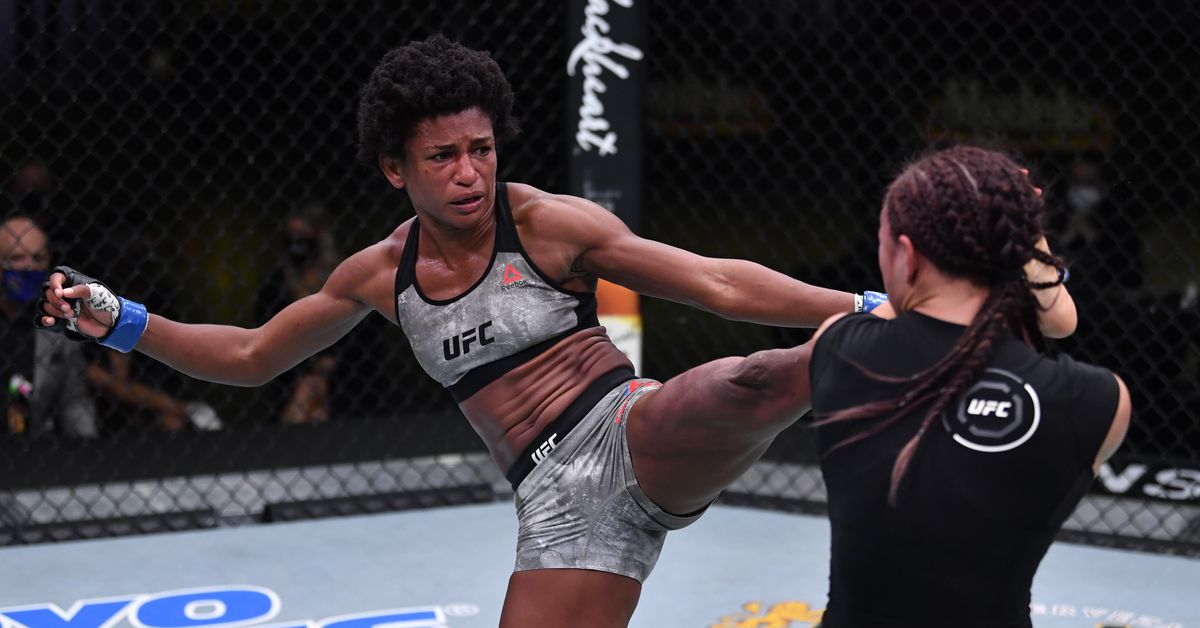 For Angela Hill, a history-making headliner wasn’t enough to ease the sting of a second straight split decision loss.

After failing to convince two of three judges in the UFC Vegas 10 main event opposite Michelle Waterson, the veteran strawweight plans to make some serious changes with her style.

“Every time I have a fight like this where I felt like it was close, or I felt like I got robbed, man, a takedown would have made a world of difference, just because of the way MMA scoring is, and I think that’s a big thing I need to sit down and work on,” Hill told reporters after Saturday’s event at UFC APEX. “Even if I don’t get a fight right away, I think that’s what I’m going to be grinding on is doing that instead of practicing it, actually trying to take people down and ground and pound.”

Waterson earned winning scores of 48-47 and 49-46 after five minutes of back-and-forth action against Hill. In the third round, Waterson’s grappling and ground control were the deciding factors. Hill fought off the majority of takedown attempts, but they also had the effect of making her more hesitant in her striking, which allowed Waterson to pick up more points on her feet.

Once a pure kickboxer who entered the UFC with just one fight on her resume, Hill’s development as a mixed martial artist has been evident for anyone who’s followed her. But recently, she’s struggled to convert that evolution into wins on scorecards.

“It sucks, man,” a teary Hill said. “I keep ending up in this position where I put my all into getting the finish and getting the decision, and it just doesn’t go my way.

“I definitely felt like I did more damage in the fight. I knew I lost the third round because I couldn’t get up, and I felt bad about kicking her in the face, but I was aiming for the chest. And in the fourth, I didn’t go for it enough; I was worried about the takedown a little too much. And in the fifth, I finally said, ‘F*ck it’ and did everything I should have done in the fourth round. I still didn’t get that fifth round.”

Hill felt the sting of defeat even more strongly than her previous fight, a split decision loss to Claudia Gadelha where 13 of 17 MMA media members gave her the win.

Immediately after the decision was read, Hill said her first thought was to quit the sport. But UFC President Dana White later talked her out of the decision. At the post-event press conference, White stumped for both fighters and declared there were no losers.

That confidence ensures Hill will continue to get fights in the near future. Even the headlining spot was an honor; it allowed her to make history as the first Black woman to headline a UFC event. The platform meant Hill had the chance to speak on a cause near and dear to her heart, Black Lives Matter, in pre-fight interviews.

“I was actually really nervous about it, because I know how touchy people are,” she said. “I know how people who call people snowflakes are very much snowflakes, and they don’t like when you say you’re black. I knew I’d have to stay off social media just to keep a clear head and stay focused on the fight. But I felt like it was important to do it. I talked to my mom about it and my brother and I made sure the things that I was saying were things that needed to be said.

“It was exciting having all that attention. I definitely am one of the more cruising under the radar type people when it comes to that kind of stuff. It was really an emotional rollercoaster going through this fight week and staying focused on the fight and trying to represent.”

Next time out, Hill’s foremost plan is to do what she needs to do to win. That means embracing a part of the game she’s merely accepted as part of doing business.

Known for short-notice fights, Hill doesn’t plan on letting her foot off the gas when it comes to her career. She’s heading to Abu Dhabi for the next round of Fight Island, and she’ll be on the lookout for the opportunities that allow her to rise above the pack at 115 pounds.

“I’ll be staying ready out there, and I don’t think there are any strawweight fights on those cards, but I’m going to check, just in case,” she said.