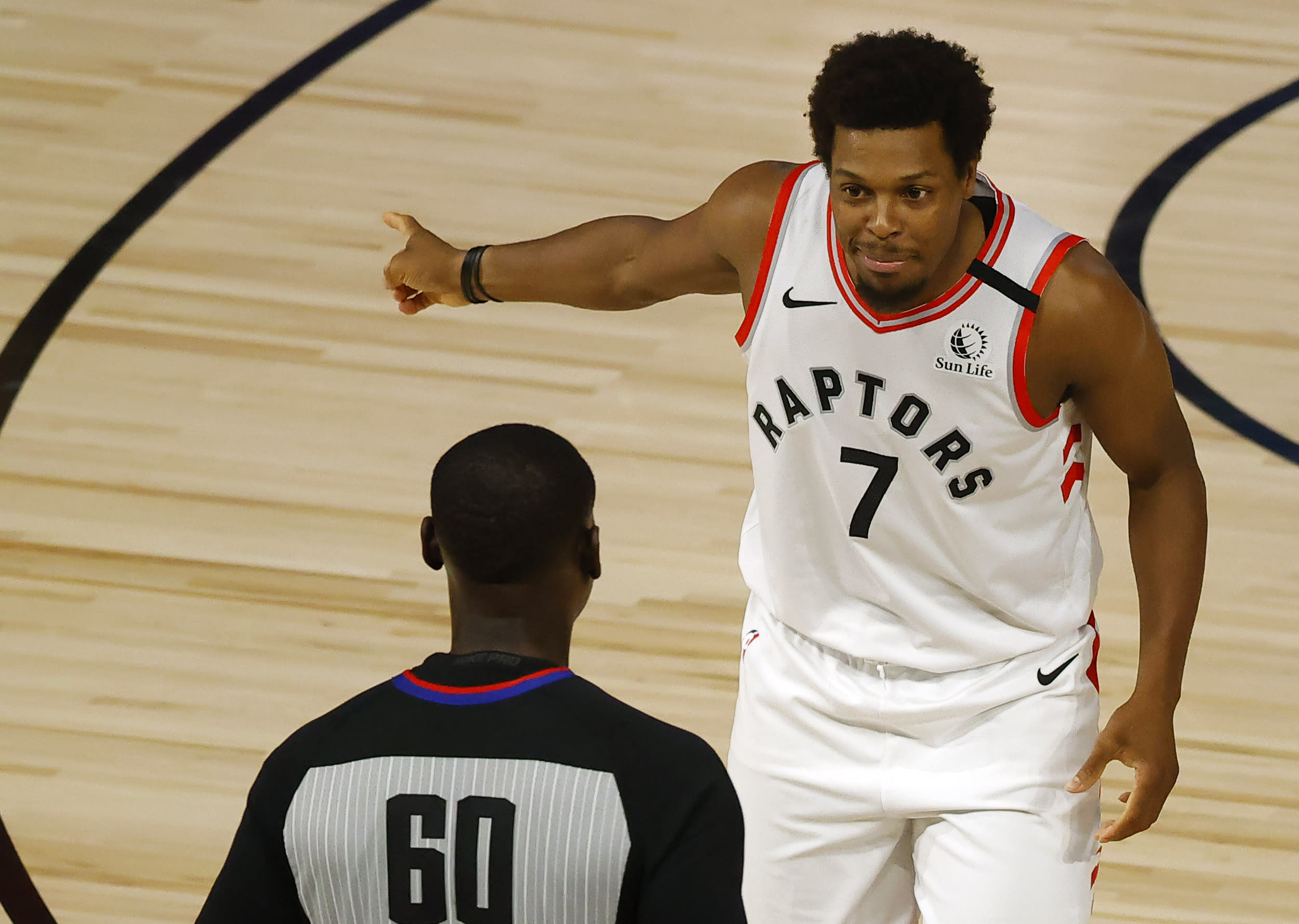 The Toronto Raptors lost Game 1 of their second-round series to the Boston Celtics in lopsided fashion, which is cause for concern. Within the context of the season series, where the Celtics won three games out of four, this result is downright scary, especially since the Celtics mopped the floor with the Raptors in their only other bubble matchup.

With plenty of fears going around, here’s what is really a concern, and what might be some overreactions to going down 1-0 in the series.

VanVleet shined in the Brooklyn Nets series, averaging 21 points on 53 percent shooting, but he couldn’t buy a bucket in Game 1. He shot 3-of-16 from the field for 11 points, and his struggles dragged down the Raptors’ offense as a whole. On the surface, this looks to be a worrying trend, as VanVleet shot 33 percent (22-for-65) in four games against the Celtics during the regular season, which is buoyed by one 27-point outing on Christmas where the Raptors lost in a blowout.

However, the tape tells a different story. VanVleet had plenty of good looks, especially from three, and it was mostly an off-night. Boston’s defense prioritized taking away the rim to prevent VanVleet’s drives by dropping their centers back against the pick-and-roll, and VanVleet made the right reads to pull-up after losing his man around solid screens. VanVleet isn’t a prolific pull-up shooter from deep — he is at 33 percent for his career — but these are great looks. Odds are that VanVleet will knock these down, especially the open catch-and-shoot chances which he hit at 44 percent on the year.

The one area where the Celtics succeeded was in keeping VanVleet out of the paint. VanVleet led the Raptors with 93 touches, but only produced 12 drives in which he shot 0-for-3. Compare that to an average of 14.3 drives per game on 77 touches. It’s a counterintuitive idea to take away the rim against VanVleet instead of running him off the line, but it hurt the Raptors’ offense as a whole. Toronto couldn’t get any dribble penetration going to the basket outside of a short-lived rampage by Kyle Lowry, and that took away from its catch-and-shoot chances. In the few instances where VanVleet did get into the paint, he was able to find Terence Davis for a corner three, OG Anunoby cutting baseline for a dunk, and kickouts to Serge Ibaka and Norman Powell.

On the flip side, the Raptors’ top scorer was downright woeful. Siakam didn’t score his second basket until the seven-minute mark of the third quarter, and the Celtics stopped double-teaming him in the second half. After bricking a few open threes, Siakam retreated into the post where he launched a series of contested hook shots while hollering for fouls that never came.

Nick Nurse maintained after Game 1, and again in practice, that he was happy with Siakam’s attempts. To his credit, Siakam did get good position for most of his offense and he had the advantage over smaller defenders. More of these shots will fall, especially if the officiating loosens up on the contact that is permitted around the rim. There were instances where Siakam was tripped by Marcus Smart under the rim only for the play to continue.

The bigger concern is that Siakam pretty much only settled for post-ups, and didn’t look comfortable in the rest of his game. It took until garbage time in the fourth quarter for Siakam to attack facing up, and he didn’t get a single point in transition. Siakam is not a Kawhi Leonard-style superstar, where the best play is to get him into his spots and getting out of the way. He is at his best when he does a bit of everything — operating in the pick-and-roll, screening then rolling to the rim, driving inside before the defense gets set — basically any scenario where his athleticism is a factor.

Only being comfortable in the post reflects a lack of confidence, which is a bigger concern with Siakam inside the bubble. Siakam didn’t touch a basketball during the quarantine, and was noticeably rusty in the seeding games where he shot 39 percent from the field. Even during the lopsided Nets series, there were instances where Siakam looked shaky despite being at a clear advantage. Everything is a bit too loose for him right now — the handle isn’t tight, the jumper is erratic, the touch around the basket is off, and his passing vision isn’t always clear — and it’s not even necessarily a tactical problem, so much as it is to do with conditioning and sharpness.

Boston went 10-of-15 from the corners, but it’s not as concerning as it would appear. One, Toronto gives up 12.5 corner threes per game, so it’s not as if the Celtics had that many more chances than average. Even Brooklyn hoisted an average of 16 corner threes in the first round. Two, the Raptors had the right shooters taking those shots, with Smart (5-of-7), Semi Ojeyele (1-of-2) and Brad Wannamaker (1-of-1) accounting for 10 of their attempts. It’s not to say that those players can’t hit open looks, but on the whole the Raptors will settle for those attempts as opposed to letting more dangerous options in Walker, Jayson Tatum, and Jaylen Brown go off. Sometimes you roll the dice and come up snake eyes.

What the Raptors need to do a better job of is walking the fine line between aggression and stupidity. For example on the play above, Siakam ditches Smart to wall off Walker at the elbow, even though VanVleet was right on Walker to deny the three, while Anunoby was ready to help at the rim. Chalk that up to just a lack of focus, especially with nothing going right offensively.

Everyone knows Toronto’s weakness is in the halfcourt, especially with Siakam struggling. VanVleet and Kyle Lowry are inconsistent because they’re 6-foot guards that must rely on their outside shot to open up the rest of their games, while bench options in Norman Powell and Serge Ibaka are hit-or-miss and not particularly dynamic.

The Raptors ranked below-average in halfcourt offense this season, and relied mostly on their top-ranked transition offense to sustain their scoring. That dynamic played out in Game 1, where the Raptors were held to only seven fast-break points (they average 19 per game) and scored a measly 0.73 points per possession in the halfcourt. Even after forcing 22 turnovers from the Celtics, the Raptors still couldn’t run.

There’s nothing particularly fancy about the transition game. Most of it comes down to effort. The Celtics showed great hustle in getting multiple bodies back throughout the game, while the Raptors were generally lethargic. There’s not much to analyze with energy, other than using the eye test. The most telling sequence was in the second half, where Lowry tried to lead what should have been a 3-on-2 fast break, only to dump it to the trailing player that never bothered to run out the play.

Boston getting back effectively isn’t necessarily a surprise. For one, they didn’t attack the offensive glass and prioritized stopping the break, and two, they are just a good defense in general. The only tangible difference is that the Celtics are younger. They only have one 30-year-old in their rotation (Wanamaker) and he is their seventh man. Compare that to three out of the top seven for Toronto. The general answer is that the Raptors need to play with more energy and hustle, but the only tangible advantage they could create tactically is to go with younger pieces that might not necessarily get the stops in the first place.

It’s sad to see a great player on his last legs, and it’s painful to see Gasol’s limitations being exposed. The Celtics haven’t guarded him all season, and they’re not doing it in the playoffs. He is all alone for much of the night, and still Gasol cannot score. Sure, he mixes in the occasional roll to the basket or a loopy turnaround jumper, but he carries no real threat. He’s not stretching the floor, the threes from the top are too infrequent, and his best contribution is reseting the play and setting wide screens.

Between Gasol and Anunoby, the Raptors have two starters that can be effectively ignored on defense. That’s partially why the Raptors have gotten off to huge deficits — 39-23 and 21-14 — against the Celtics in each of their last two matchups. It’s hard for the starting five to get going offensively when Boston ignores Gasol entirely and has Daniel Theis denying the rim, while also allowing 6-foot-8 forwards in Brown and Tatum to play free safety away from Anunoby. It would be one thing if Gasol could punish the Celtics with his scoring, but he has scored 14 points total in three games against Boston’s strategy this season.

That’s why Nurse should consider flipping Ibaka into the starting five at some point. With what Gasol provides on defense, he deserves another shot, but not if it costs the Raptors another game. Ibaka isn’t as impactful defensively, but he will provide a fourth scoring threat for the starting five. Ibaka averaged 18 points and 10 rebounds in 27 starts this season, and has plenty of experience with the other starters.

Consideration should also be given to Chris Boucher, especially since Nurse has already tipped his hand with the dual-center look. Boucher is a gamble, for sure, but he rolls hard to the rim and can impact the offensive glass, which is what going big looks to achieve. Boucher did well in two showings against the Celtics this season, with 24 points on Christmas and a plus-19 rating in the revenge game that followed. Boucher’s quickness and overall energy is a nice alternative to more seasoned styles of Ibaka and Gasol.

Going back to Gasol, he should be viewed as a matchup player rather than the go-to option. Gasol is indispensable when there is a low-post banger like Joel Embiid, Nikola Vucevic, DeMarcus Cousins, or even Giannis Antetokounmpo to stop. Boston has a few drivers, but mostly it operates on the perimeter. That’s not to say Gasol is lost altogether, but rather that his usage needs to be situational.