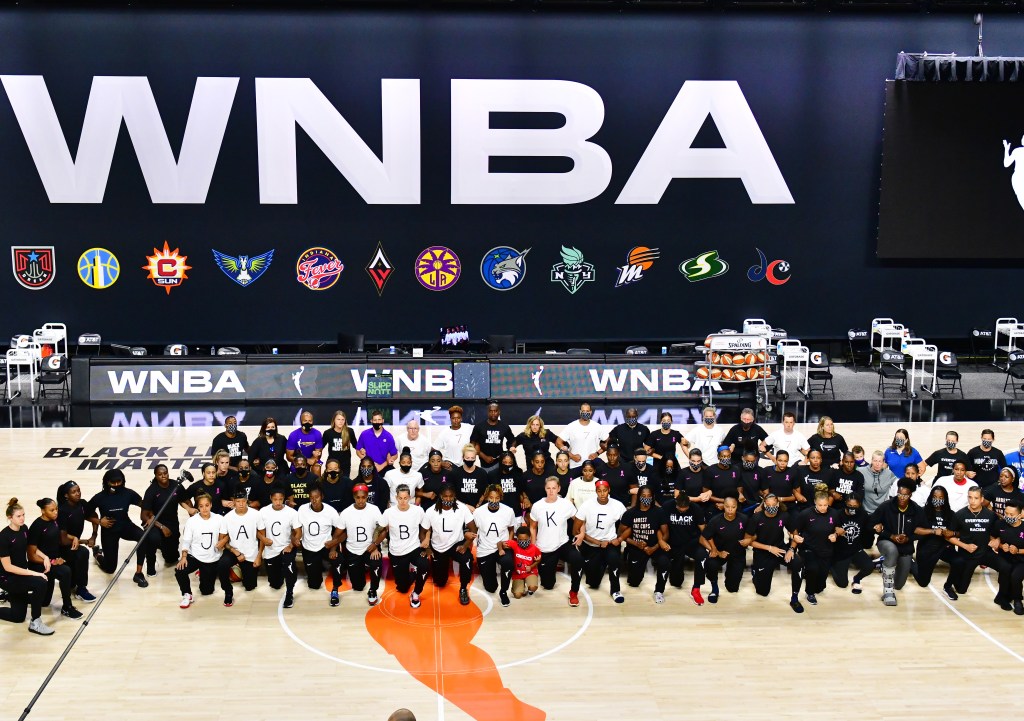 The players of the WNBA may have followed in the NBA’s footsteps on Wednesday in deciding not to play to protest the police shooting of Jacob Blake, but they continued to blaze a new path of organized messaging around social justice. In terms of the games themselves, this week saw the Seattle Storm, Las Vegas Aces and Los Angeles Sparks make their dominance official, Arike Ogunbowale announce herself again in case you’ve forgotten about the Dallas Wings and the potential end of the Chicago Sky’s title hopes — don’t cry, Sky fans. 2020 is rough for everyone.

Here’s what we learned from week five in the WNBA:

1. The players are leading the way on social justice, once again

On Wednesday, the Milwaukee Bucks took a stand by choosing not to play in Game 5 of the Eastern Conference quarterfinals against the Orlando Magic following the police shooting of Jacob Blake, a 29-year-old Black man in Kenosha, Wisconsin. What followed was a ripple effect, with players in every other major U.S. professional sports league opting to do the same to protest continued police violence against Black people.

In the WNBA, though, the collective actions taken by the players were extraordinarily well-organized and powerful. Together, the Washington Mystics and Connecticut Sun decided to sit out their game Wednesday and instead all the teams that were scheduled to play that night knelt together on national television while Atlanta Dream center Elizabeth Williams read a statement from the players. The WNBA has historically been one of the most outspoken and thoughtful leagues in terms of fighting for social justice, from the Minnesota Lynx’s press conference in July 2016 following the separate police killings of Alton Sterling and Philando Castile to the players’ recent calls to remove Kelly Loeffler as co-owner of the Dream.

The league dedicated the entire 2020 season to furthering the Black Lives Movement and #SayHerName campaign, and the players have not allowed those issues to fall by the wayside during the season’s run in the wubble. Last week was not about players striking during a basketball game — it was a moment for everyone in the U.S. and around the world to pay attention; to take a day to reflect, to inform themselves and to prepare for action.

The Chicago Sky are not having a bad season. In fact, the team is in 5th place with a 10-6 overall record and is poised to make the playoffs for the second year in a row. But while the players arrived in Bradenton, Florida with title ambitions, it now looks like they might have aimed too high.

With Azura Stevens out for the season due to injury, Diamond DeShields leaving the wubble and not having played well this year along with the gargantuan performances of the Seattle Storm, Las Vegas Aces and Los Angeles Sparks, I think it’s safe to say this is not Chicago’s year. But there are still positive signs to take away from this year’s Sky team; Courtney Vandersloot is making her case as the league’s best point guard every single time she steps on the court, Allie Quigley is still a lights-out shooter and rookie Ruthy Hebard’s growth has been promising.

Being a top-five team just two years after a particularly terrible stint for the franchise is an accomplishment, and head coach James Wade should feel encouraged, not disappointed by this year’s performances. Anything can happen in the playoffs, but right now Chicago is far from the favorite.

3. Does home court matter in the wubble? The evidence says yes.

Though this season is taking place entirely at IMG Academy, the notion of home court advantage might not have entirely dissipated on the journey to the Sunshine State, as noted by FiveThirtyEight’s Howard Megdal.

Through 16 games for almost every team, WNBA “home” teams are now 55-38 this season. Seattle, which has dominated everyone and everything so far, leads the way with a perfect 8-0 home record followed by Las Vegas (8-1), Los Angeles (7-0) and Minnesota (6-2). Meanwhile, New York is 0-8 at home as their only two wins have come “on the road”, so I’m not sure what’s happening there. With no traveling, no fans and a different court, the league has had to come up with other ways to construct a home court environment for teams. As reported by The Athletic, that means bringing in a DJ to play home team-curated music in the arena during warm-ups and throughout games along with keeping the tradition of allowing home teams to choose which bench they’d like.

Whether these things have helped keep the idea of home court advantage alive is not clear, but something seems to be working for these “home” teams. Food for thought.

4. Arike Ogunbowale is blooming in front of our eyes

Arike Ogunbowale may be in her second year in the WNBA, but she’s showing no signs of sophomore slumping. This season, she’s averaging a league-high 22 points, 3.4 assists and 2.7 rebounds per game while keeping a young Dallas Wings team in the playoff hunt — they currently occupy the eighth seed and Ogunbowale has the highest usage rate in the league. She has also slightly improved her shooting this season, going 42% from the field compared to last year’s 39%. She’s come up with some big performances this season, including a 30-point explosion against the Indiana Fever in a win that could have important implications in the playoff hunt and a 33-point game that helped bring down the Phoenix Mercury. In Saturday’s game against the Fever, the 5’8 guard rolled her ankle and had to come out of the game in the first half before returning and scoring 19 points in the second half.

The former Notre Dame guard is already a big name in this league, and if she keeps stuffing the stat sheet each night, Ogunbowale will continue to be one for a long time.

5. The Storm, Aces and Sparks Sparks are officially in the playoffs

As we’ve seen through the first half of the season, the Storm, Aces and Sparks are on another level this year, leading the charge for the 2020 WNBA Championship. And on Sunday, the Sparks officially joined the Storm and Aces in the playoffs with an 84-79 win over the Dream. It is very likely that at least one of these teams will appear in the Finals this year, and we’ll just have to wait and see if that Breanna Stewart and Co., the star-studded team from LA or the hungry Las Vegas team led by potential MVP A’ja Wilson.

This also means that there are just five spots left in the playoff hunt with two weeks left in the regular season. Minnesota looks steady in that fourth spot, and Chicago is dealing with the losses of DeShields and Stevens, but still looks like a playoff team. The race for the seventh and eighth seeds could get spicy with Dallas, Indiana and Washington all nipping at the Connecticut Sun’s heels.