I think someone at InXile Entertainment has watched Honey, I Shrunk the Kids a few too many times.

Wasteland 3 has grenades that shrink your foes. Enemies have them, too. The studio’s previous role-playing game, The Bard’s Tale IV: Barrows Deep, has spells that turn the baddies into pipsqueaks. And in that one, they have tiny voices and look ridiculous in combat. I shrunk my foes in so many battles.

This time, the enemy shrunk me.

I was storming an apartment, where the landlord thought someone was brewing bombs. Turns out they were creating clones — and these copies were insane. So when I blew up the door and stormed in, they responded with stark-raving mad shrieks and by lobbing shrink grenades.

This encounter is just one example of the wild, wooly West that awaits you in the postapocalyptic Colorado in Wasteland 3, InXile’s latest entry in the series. It’s on PC, PlayStation 4, and Xbox One, and it’s the final RPG from the studio’s independent days of funding projects on Kickstarter, before Microsoft acquired it in 2018. Deep Silver’s the publisher.

It picks up where Wasteland 2’s story leaves off. The Arizona Rangers are in shambles after defeating the Cochise AI and setting off a nuke. But a powerful person reaches out to offer your succor — the Patriarch, the leader of Colorado. He needs your help with his kids, all who want to take over his rulership over Colorado Springs and the surrounding area. And all of them, to paraphrase Hank Hill, just ain’t right. From there, you clean up the mess, build up your forces, and learn just what’s happening in the Rockies these days.

Here’s what I think after more than 10 hours with Wasteland 3.

My everlasting takeaway from Wasteland 2 is that despite it being a fantastic RPG, the turn-based combat is too challenging at lower levels. The foes come across as too powerful to me.

Wasteland 3 feels better-tuned at earlier levels. While I did lose some troops a few times, I didn’t feel like I was a group of grunts storming no-man’s land getting mowed down by machine guns. Cover plays into this. InXile has thrown cover in strategic points around battlefields in a manner that both makes sense and is exploitable — I’ve been able to find some fantastic killzones thanks to the layout of some encounters. You can also destroy a great deal of cover. Chewing away at a wall with your machine gun makes an enemy more vulnerable without forcing you to expose your adventurers.

I dig one encounter in the remains of a mall parking lot. Your party starts in a chokepoint, which widens as you make progress. The baddies are on a higher level, with two ramps on either side of the map leading to their perch. Thankfully, you have a great deal of cover (concrete barriers, empty oil drums, and more) to help you advance as the villains fire away. You also face some foes on the ground below, but a few well-placed rockets, blowing up an oil drum, or other strategies pay off. By the time I had chewed my way through the henchmen, I got to the main baddie with three characters still alive, and the dead one happened only because I left her exposed to melee attacks.

What’s nice about this set up is that I was able to take advantage of cover, lay down fire to protect for my close-in fighters, and take out the enemy on the top level, all while feeling like I had the tools to do so. I don’t remember any of the battles in Wasteland 2 feeling this tactical. 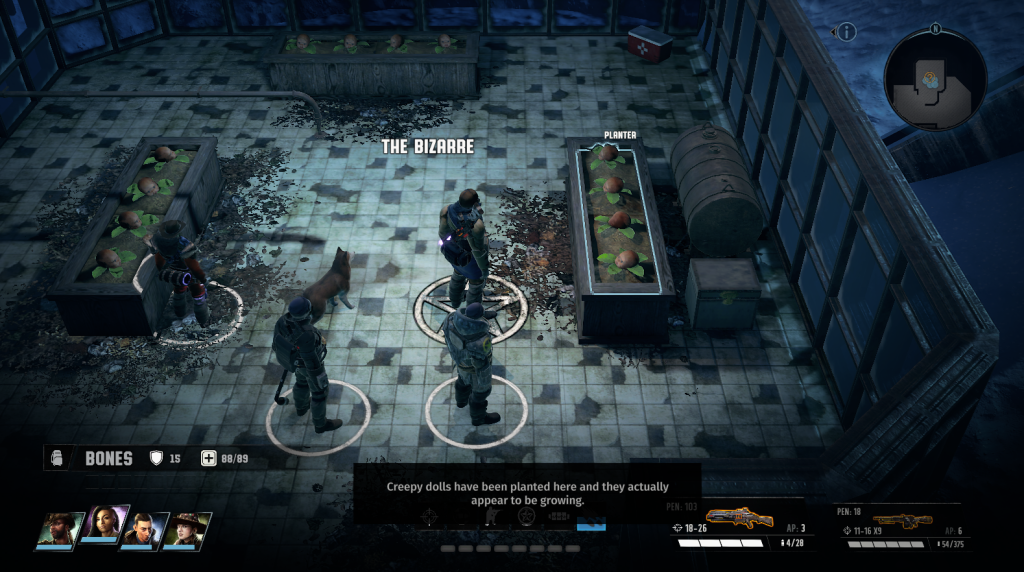 Above: This feels like a Jonathan Coulton song come to life.

InXile peppers Wasteland 3 with exploding pigs, bad accents, silly puns, and weird foes with bad outfits (along with the shrink grenades). This is the sort of humor I live for in RPGs (and in books, TV, and movies as well. I’m a cheesy fella). I’m long past the “the world is ending, we have to save it” stories that emphasize drama over laughs.

The Bizarre stands out as a bastion of this silliness. You end up clearing out the lower levels of a mall for this area’s capo, Flab the Inhaler. He’s a grotesque, obese play on a vampire lord. He speaks in a horrible accent out of the worst bloodsucker flicks. It turns out this place is under siege by a gang that dresses up as clowns and turns pigs into bombs. As you go down into the tunnels underneath the mall, you find not just a silly band of baddies but also a good dungeon to crawl through. And that’s what I love about the humor; it’s important, but it doesn’t detract from the game, its mechanics, and its design.

My favorite laugh so far might be MacTavish. He affects a Scottish persona, with an accent cheesier than Scotty’s and an outfit to match. You end up finding a cassette that shows it’s all a fake — the recording has him practicing the accent, and when he fails, you hear him complaining in an even worse Texan drawl. What’s more, after you figure this out and capture him, he sticks to it in jail, even after you both know the accent is a fake.

In Wasteland 2, you end up dealing with an evil AI and another nuke. So far, your adventures in Colorado feel more homey. You’re taking care of bad people and making it safer for those who just want to live in peace. You’re fighting The Patriarch’s wild kids. Yes, some of it is a bit over-the-top and gross, and I do have a great deal more of the story to dig into. Yet rebuilding the Rangers and making Colorado safer just feels comforting.

This doesn’t mean Wasteland 3 lacks moral choices. I’ve already had to decide if I want to side with corrupt cops or gangsters that appear to have a good heart. Another choice involves killing a man — and those who helped him — after you learn he let a bloody gang into Colorado Springs. As a kicker, you also deal with whether you want to help one of your companions take vengeance on them for that gang slaughtering her family. Sure, we’re not dealing with nukes, but the stakes are still there. They’re more personal this time around. 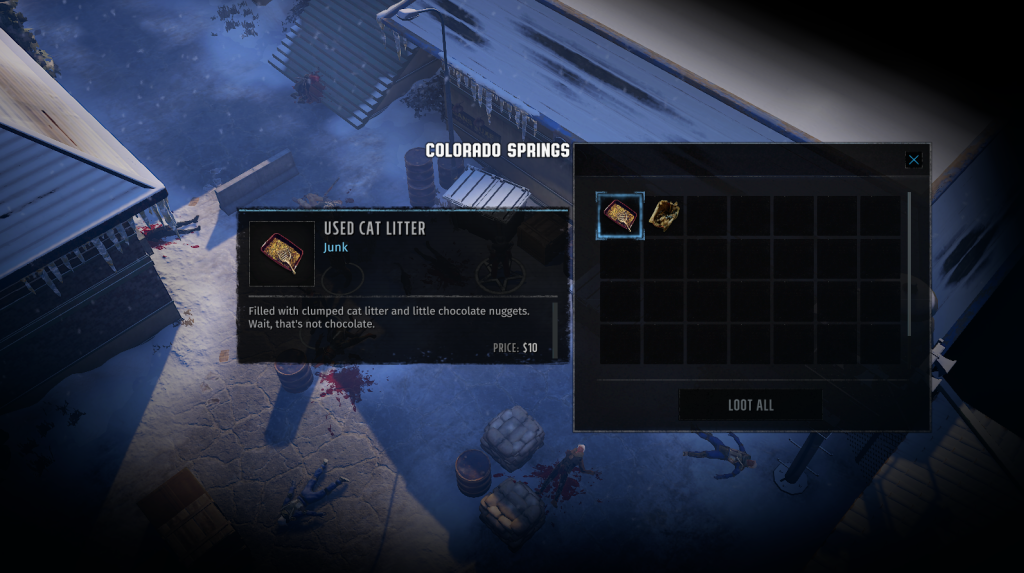 Above: This might be the first time in my decades of playing RPGs that I’ve found cat litter loot.

Now, I may find out that one of these power-mad kids is going to blow it all up with a nuke. That certainly would change the stakes. But so far, I like just how much of Wasteland 3 is about dealing with the locals and their problems.

Wasteland 3 feels different from both its predecessor and other RPGs coming out right now, such as Pathfinder: Kingmaker’s definite edition. It still has a big scope that we’ve come to expect from InXile, but it feels more intimate as well. It’s more welcoming than other games.

And so far, it doesn’t have that freight train momentum you sometimes feel from other RPGs, where the story gains so much steam you feel like you need to blitz through it, missing out the sidequests and other tidbits that gives games character. Wasteland 3 isn’t asking me to hurry up; it wants me to stay awhile, crack open a beer, and take it on at my pace. And that might be its greatest strength so far.

And nothing can shrink that.

Wasteland 3 is out now for PC, PlayStation 4, and Xbox One. It’s also a part of Xbox Game Pass. Deep Silver sent GamesBeat a Steam code for the purposes of this review.