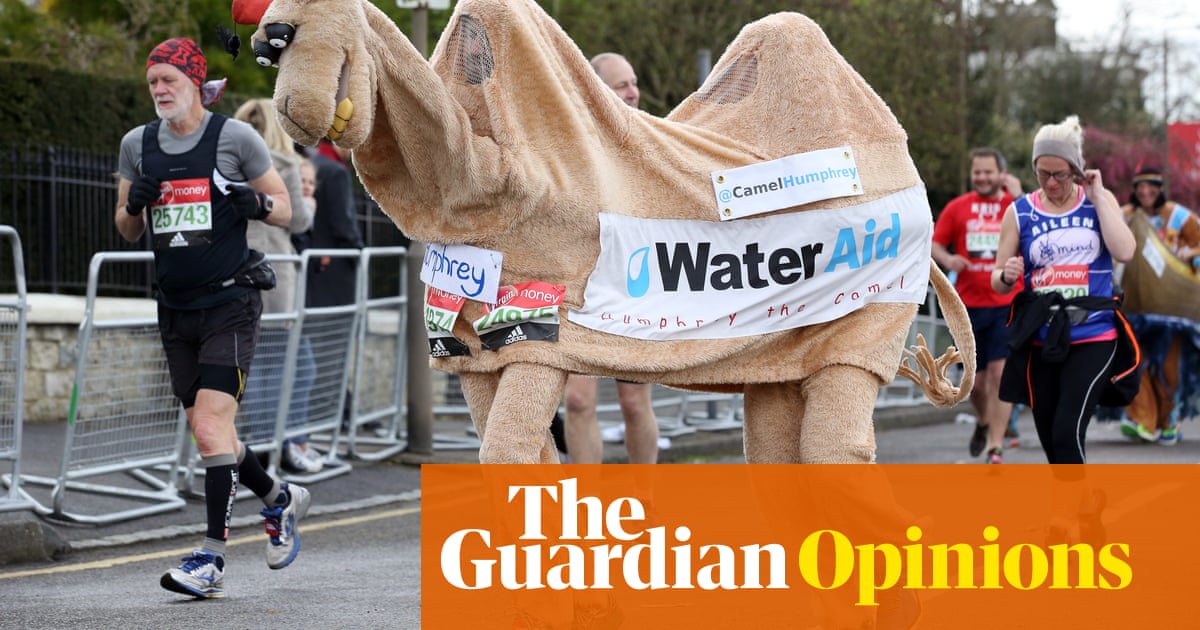 The number of competitors in the London Marathon has risen steadily since its inception in 1981. There were 7,000 in that inaugural race; almost 25,000 a decade later; and a record 43,000 last year. With its combination of elite athletes running the course in a whirlwind two hours and people dressed as camels taking three times as long, it has become a national fixture each spring. Sadly, thanks to the pandemic, this year’s race, the 40th, is different in every way: it will take place in the autumn, on Sunday 4 October; will be run around a loop of St James’s Park which runners will negotiate almost 20 times; there will be no spectators; the competitors – all elite athletes – will number tens rather than tens of thousands; and camels are not invited.

This stripped-down race might please some marathon purists who think the carnival had got a little out of hand. Steely athletics coaches like to point out that if a marathon takes you six hours, you have not run it but merely walked over the course. Average marathon times have been getting slower as city events have become mass fun runs. There have been reports of some runners stopping mid-race for a spot of lunch. People can sometimes be unkind to the dawdlers at the back – the woman who was last home in London in 2019 claimed stewards “sniggered” at her as she finished the course alongside the clean-up trucks.

It may well be true that this most testing of challenges would not have been invented if Pheidippides had stopped for lunch during his reputed 25-mile run from Marathon to Athens with news of the Greek victory over the Persians in the battle of Marathon in 490BC. Or if he had got there after the broadcasters had gone home.

Whatever the myth, the Greeks began with track events more like 5km or 10km races. Medics suggest that if you are exercising for fitness, such runs might provide a better way to get there. For the elite, however, marathons are a question of mind over matter.

The purists and ultrarunners are missing the point: the London Marathon is a festival, not an athletics meet; a spectacle rather than a race. We may admire the elite runners, but we identify with the plodders, who are the soul of the event. So is the race on 4 October worthwhile, or is it yet another example of sports administrators feeling that the show must go on in some form, any form – cue fake crowd noise? It is tempting to say they shouldn’t have bothered. Most other city marathons around the world have written off 2020.

But the London organisers have come up with a novel wheeze: they are inviting fun runners who had been allocated places in the abandoned mass event to run (or even stroll) 26.2 miles on 4 October on any course anywhere and to log their achievement on the official app. If they do, they qualify for a finisher’s medal and T-shirt, and more importantly can still raise money for charity – the London Marathon raised more than £66m last year. If enough runners take part in the virtual race and raise at least some of those millions, it will have been worth it. Don’t pack away those camel costumes just yet.