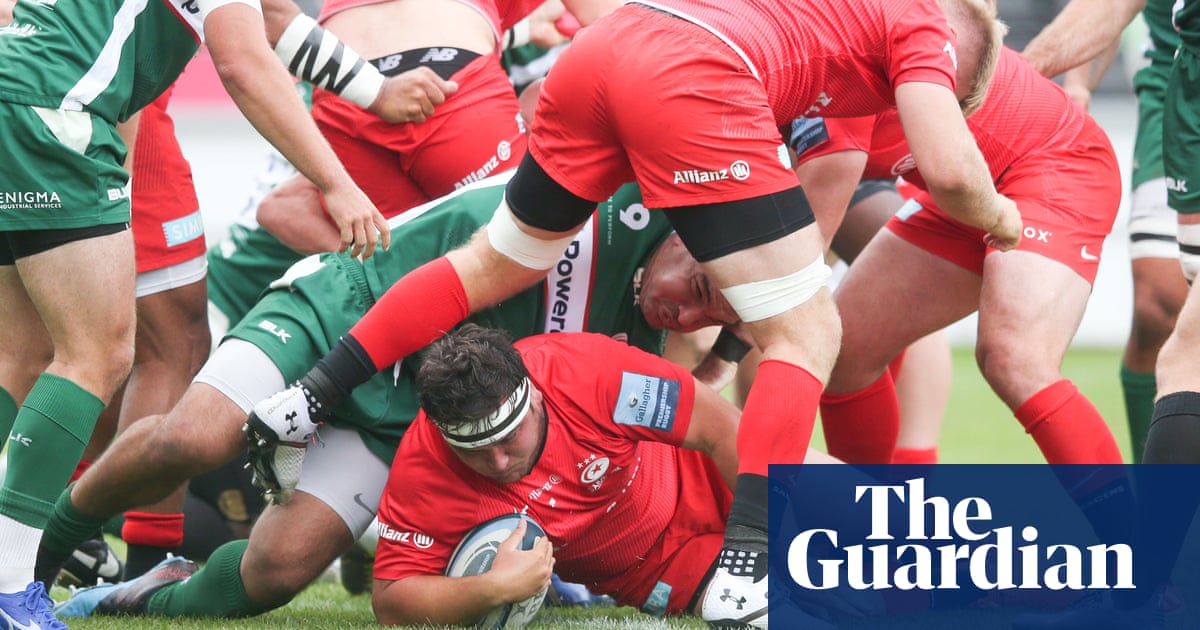 As we have seen a number of times across this Bank Holiday weekend, discerning precisely what the point is of mismatches like this can be easier said than done. All things considered, however, Saracens have at least sharpened what will no doubt be a key weapon in their European quarter-final against Leinster in a few weeks, coming up with six close-range tries, while London Irish, evidently already with one eye on next season, can be pleased with how some of their youngsters acquitted themselves.

No Owen Farrell, no Mako Vunipola, but Saracens simply had too much class, too much power for their youthful opponents, even if it is hard to escape the feeling their coaches have turned their Premiership matches since the restart into training exercises. In previous matches they have kicked penalties they ordinarily would not – mindful that their Dublin quarter-final could come down to a shot at goal – and here they were determined to polish up on their driving maul. Had there been anything riding on this fixture, surely they would have scored considerably more.

Thanks to the focus on short-range finishing, however, Jamie George and Richard Barrington profited with two tries, Brad Barritt and Billy Vuniplola one apiece. It hardly makes for captivating watching but considering this victory – their third in a row since being edged out by Bristol – moves them to minus 47 points at the foot of the table, you can hardly blame them. Mark McCall freely admits that his main aim is to get his first XV enough minutes in the tank before facing Leinster – they have three more matches beforehand but Saturday at home to Wasps is shaping up to be the final hit out – and the overarching issue remains that Premiership Rugby’s desperation to complete all fixtures by October has made contests, if we can even call them that, such as this inevitable.

“[The lineout drives were] definitely something that hadn’t gone so well in the first two games in particular but we were much better there today,” said McCall, Saracens’ director of rugby. “We’re not quite where we need to be [for the Leinster match] but individuals are playing well. We’re building towards that, of course, and playing a game like today that has less meaning it’s always going to feel a little bit different.”

Irish, for their part, seem to be killing time until they move into their new stadium with Brentford next season. They have lost all four of their matches since resuming but Declan Kidney made a point of highlighting how nine of their starting lineup had progressed through the academy and the flanker Isaac Curtis-Harris in particular caught the eye on debut. “I didn’t think they let themselves down individually,” said Irish’s director of rugby. “The encouraging thing is it’ll only stand them experience-wise.”

Irish did not want for endeavour but after a lively first five minutes or so from the hosts, Saracens scored with their first venture into their opponents’ 22 – Michael Rhodes taking the lineout and George bundling his way over. Their second came five minutes later, a carbon copy but on the left-hand side, this time Barritt touching down and while Agustín Creevy got a close-range score on his debut, Billy Vunipola was on the scoresheet soon enough, quickly tapping and bulldozing his way over.

On the half-hour, Irish had their second try after capitalising on a poor pass from Maro Itoje to Billy Vunipola with Matt Williams powering over. Saracens had their fourth when George again finished off a driving maul before half-time and Barrington chalked up a quickfire double early in the second – the relegated champions turning the screw.