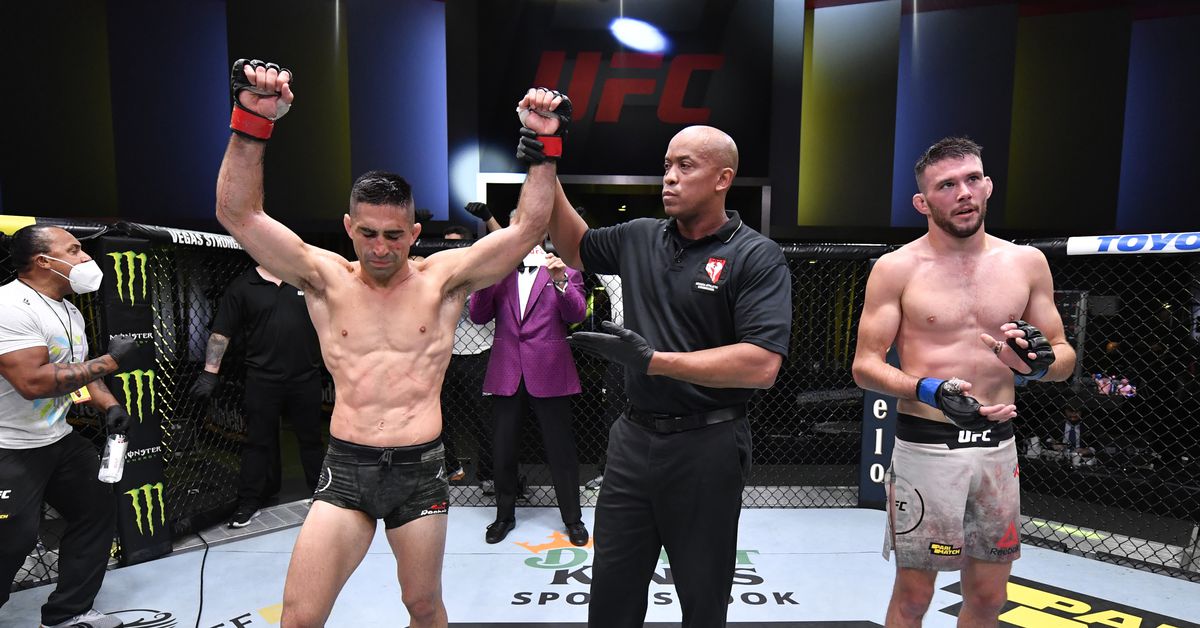 Ricardo Lamas hasn’t made up his mind yet on whether Saturday marked the end of his fighting career.

Following a unanimous decision win over Bill Algeo at UFC Vegas 8, Lamas told commentator Paul Felder during his post-fight interview that he was considering retirement.

“I’ve been kind of wrestling with the idea of hanging the gloves up,” Lamas said. “That’s something I want to talk to my family about first before making a decision.”

Backstage, the veteran featherweight elaborated on his comments and the possibility that Algeo could be his final opponent.

“Since my fight with Jason Knight, which was a few years back, I’ve kind of been contemplating,” Lamas said. “I remember before that fight I told my wife, I was like, ‘If I have a good performance in this fight, I might just call it a career.’ But the thing with this sport is you have a good performance, and you have a win, and then you want another one. And then it becomes like an addiction and you just keep chasing those victories.

“Obviously, over this last year I’ve had a lot of ups and downs. My last fight I suffered my worst injury that I had to date, fracturing my jaw in two places. I had to have surgery. Just a lot of ups and downs in the last kind of year or two with my career, and I think that can be attributed to me kind of wrestling with the idea of hanging up the gloves. I don’t know, I’m thinking like this now and I could wake up tomorrow and want to call Sean Shelby on the phone and see what he’s got next for me. We’ll see what happens.”

It was a much-needed win for Lamas, who entered Saturday’s contest with losses in three of his past four bouts. He had not competed since June 2019, when he was knocked out inside of one round by Calvin Kattar at UFC 238.

Though Lamas suggested that thoughts of retirement may have affected his recent performances, he gave credit to Algeo for stepping up on short notice and giving him a competitive fight.

“I never really expect to walk through anyone, whether they’re a newcomer or not,” Lamas said. “People who’ve been in the cage know that. This is the fight and anything can happen. So I give respect to all my opponents and I know that I’m a man and I can get beaten on any night just like anybody can.

“Just ‘cause he was a newcomer doesn’t mean it was gonna be an easy fight. He’s a tough dude. He brought the fight tonight and he deserves that respect.”

Lamas said the result, not the entertainment value of the fight, was more likely to determine whether he was actually retired. However, he declined to make a definitive statement, adding that his immediate concern is getting home to his family and relaxing. He also mentioned that should the UFC offer him “a sh*tload of money for another fight,” he would be interested.

Asked about his legacy, Lamas wants to be remembered for a 12-year career that was mostly free of outside-of-the-cage drama.

“That I always left it in the cage,” Lamas said. “Just like in this fight, it was a back-and-forth fight. But just never stopping, and kind of as fights progress on, I just get meaner and the dog comes out of me a little more. That’s probably due to me being the youngest of six boys and just getting beaten up to a point where I just started fighting back.

Lamas joined the Zuffa-owned World Extreme Cagefighting in 2009, picking up a win over veteran Bart Palaszewski in his debut. He went 4-2 before the promotion’s featherweight roster was merged with the UFC.

In his first four UFC fights, Lamas knocked off a slew of contenders including Erik Koch, Hatsu Hioki, and Cub Swanson to set up a championship bout with Jose Aldo at UFC 169. Although Lamas fell short on the scorecards, he remained a top-10 contender for the better part of the last decade.

“I barely had any fights when I signed in the WEC, when I signed with Zuffa,” Lamas said when asked if he was happy with his career up to this point. “I grew up in the biggest organization that the fight has to offer. I fought for a world title. I fought in front of my home crowd, I won in front of my home crowd. I fought in Mexico; I was able to meet family that I probably wouldn’t have met had it not been for the UFC and having fought there. My career is just full of memories that I can look back on for the rest of my life.”