Playing to an empty Albert Hall can have its advantages, and Simon Rattle and the London Symphony Orchestra’s contribution to the audience-free Proms was a programme devised to exploit the spatial effects that can be achieved in that cavernous space. Only the last work in their concert, Vaughan Williams’s Fifth Symphony, had the 50 players arrayed on the platform in as near to a conventional layout as social distancing currently allows.

There were canzonas by Giovanni Gabrielito begin, with the four groups of brass players around the edges of the platform and grand tier boxes to provide a reminder that the idea of spatial music dates back at least to the 16th century, while for Rattle’s spacious performance of Elgar’s Introduction and Allegro, the string orchestra was laid out as the composer originally envisaged, with the solo quartet seated and the other players (cellos excepted of course) standing behind them. 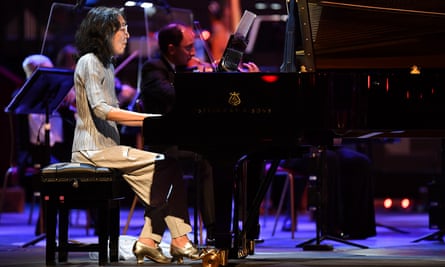 In György Kurtág’s … quasi una fantasia…, a miniature piano concerto compressing four movements and a huge expressive range into just 10 minutes’ music, the orchestra is divided into five groups dispersed at varying distances from the solo piano. Mitsuko Uchida was the soloist, prefacing her meticulous performance of Kurtág’s spare but intricate piano writing with the first movement of Beethoven’s Moonlight Sonata, Op 27 no 2, which carries the subtitle of “quasi una fantasia”.

Uchida stayed at the piano for the premiere of Thomas Adès’s Dawn – Chacony for Orchestra at Any Distance, written over the last few months for Rattle and his orchestra to perform in the Royal Albert Hall. The seven-minute piece is designed for an orchestra of any size – Rattle opted for double wind – with a cimbalom adding a brittle edge to the hymn-like chaconne theme with its subtly shifting colours; there’s no development, no surprises, just a simple insistent incantation.

Vaughan Williams’s Fifth carries that hope for a new dawn, too, especially in its final passacaglia (a form that’s a close cousin to the chaconne). There were some passages in Rattle’s performance, especially in the slow movement, when a few more strings might have provided more expressive weight, but in the circumstances there could be no complaints.