Everyone runs out of steam eventually. In the case of Pablo Picasso, the process was lengthy and he fought it with flashes of fury, lust and wit. He obviously didn’t think of himself as old when, in his 70s, he posed bare-chested for the photograph that appears at the start of Bastian Gallery’s nostalgic tribute to his last studio, in postwar Cannes. Picasso would work as energetically as ever, right up to his death aged 91, leaving a heap of late works. But does the last quarter-century of his career actually add anything to the miracles that came before?

Perhaps he should have retired after such wonders. Instead, in 1955, he set up studio at La Californie, a palatial villa in Cannes. It was his most theatrical working space – and perhaps that says something about his decline. He’d painted Les Demoiselles in a crumbling hovel in Montmartre, Paris, and Guernica in a dark loft on the Left Bank. Now here he was setting up his easel in an ample space done out in North African style.

L’Atelier claims to “reimagine Picasso’s Cannes Studio as an immersive experience within the gallery”, but it doesn’t do that with much precision. The Bastian Gallery in London’s Mayfair is a slender boutique that can’t begin to suggest the expansiveness of La Californie. It tries instead to capture the studio’s mix of work and home with pots arranged on a dresser, an empty wicker chair where Picasso might have sat contemplating his own works, and examples of the African sculptures he loved. Unfortunately, it’s all fake. 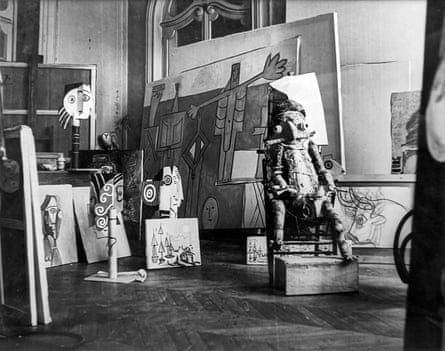 As for seriously examining Picasso’s work from the 1950s to 1973, it turns out the show doesn’t do that, either. Throughout, late works are judiciously spiced up with 1930s masterpieces including a rare gem: Picasso’s illustrated edition of Aristophanes’s ancient Greek sex-strike comedy Lysistrata.

Yet this frankly deceptive exhibition is irresistible. Picasso may have been unfashionable in avant-garde circles after 1945, but this was when he became a mass celebrity. The photographs here by André Villers are how we picture Picasso, the muscular balding bullfight fan. His posters for southern French corridas are also exhibited here. This is a child-friendly Picasso, painting crazy faces on plates in a cartoon version of his cubist portraits. 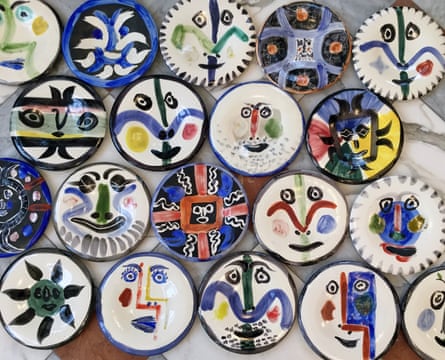 It’s usually assumed that Salvador Dalí was the first celebrity artist but Picasso also knew how to husband and enjoy fame. The difference was his genius. Even when waning, it still astounds. Two etchings from 1969 show a woman lying nude, not gracefully recumbent but displaying her thighs and what’s between them to his insatiable eye. He draws it all in clear black lines with no reworking. You feel the speed, the urgency. She is so solid, so carnal – it seems incredible an artist can make someone so physically real with just a line.

Picasso in old age was outrageous and a bit pathetic, playing up to the role of the veteran creative toreador while torturing himself in his studio as he tried to recapture the priapic energy of his youth. Yet perhaps this is the most human and inspiring Picasso of all – a genius who stepped down from his pedestal to fail and struggle with the rest of us, who can still make art that can open your senses to life like no other. The artist here isn’t perfect. He’s much greater than that.

• Atelier Picasso is at Bastian Gallery, London, 3 September to 31 October.