Perhaps the moment we all realised that Lyon were going to win the Champions League once again came about seven minutes before half-time, as Lucy Bronze stepped up to take a throw-in. As Bronze waited for the referee’s signal, she started absent-mindedly spinning the ball on the end of her finger, like one of the Harlem Globetrotters to which this all-conquering, lavishly-funded Lyon team is so frequently compared.

It was, in a strange way, the perfect emblem of a final that offered only the illusion of closeness. Though Wolfsburg certainly had their moments during their 3-1 defeat to Lyon in San Sebastián on Sunday night, there always seemed to be a basic, elemental difference between them: a combination of quality and extra gears, of poise and big-game experience, of which team needs to scrap and sweat for every last inch, and which has the chutzpah to start doing basketball tricks in the first half of a Champions League final.

How do you stop Lyon? Right now we have no solutions, only hypotheses. This was their fifth Champions League in a row, and during those five finals they have trailed for a grand total of five minutes. This is a side that can ask questions quicker than any team on earth can answer them. Sit deep and they’ll pound you down. Meet them high and they’ll skewer you with pure pace, precise long balls and one of those richly condescending attacking moves that consists almost entirely of dummies. Keep it tight and invariably Wendie Renard will descend from the heavens to score the only goal of the game with a bullet-header and a scowl for wasting her time.

And yet, this is what makes Lyon so enduringly fascinating to watch: even in triumph, there’s an irresistible fragility to them. Even as they march deeper into the history books, solemnly building their empire, you can glimpse the seeds of its ultimate destruction. It is what makes them seem infallible and fallible all at once. They know that women’s football may never see another era of dominance like theirs. They know that one day one of the chasing pack, a giant of the European men’s game – perhaps Chelsea, or Barcelona, or Paris Saint-Germain – will swallow them up, and kick the game further down the road in the process. But right now this is their time, this is their stage, and they alone are equipped to fill it. 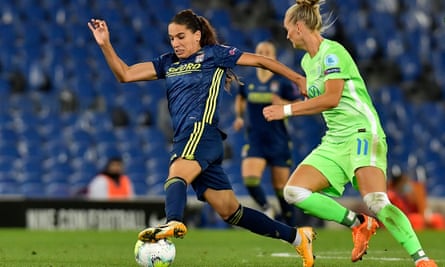 In many ways, the crossroads at which Lyon currently find themselves is a microcosm of the broader conversation around women’s sport in the current age, a swirl of hope and optimism and doubt and vulnerability all at once.

What does success look like? Is it better to grow quickly or slowly? Can you run women’s sport along the same principles as men’s sport? And how do you build something in a landscape that (in recent times at least) has scarcely been more hostile, in a culture that seems more set than ever on your erasure?

This last question feels like the most pressing of all, given the way Covid-19 is threatening to claw back the gains that women’s sport has spent decades painstakingly winning. On Saturday, more than two months after the Premier League’s jet-powered project restart, domestic women’s football finally returned to this country with the Community Shield at Wembley.

Rugby union’s leading women’s competition, the Premier 15s, is currently without a start date or a title sponsor. Meanwhile, England’s hastily arranged T20 series against the West Indies will be the only international women’s cricket in a summer where, miraculously, every single scheduled men’s fixture has been salvaged.

Even in tennis – individually by far the most lucrative of all women’s sports – the roll-back may be under way. Over the weekend Novak Djokovic launched his new Professional Tennis Players Association, a lobby group established to protect the interests of the world’s top-500 men’s players. Given Djokovic’s previous opposition to equal prize money in tennis (“women should fight for what they think they deserve, and we should fight for what we think we deserve”), it’s hard not to interpret this as an attempt to unpick one of the sport’s most cherished principles.

And above all, you get the sense that this inbuilt hostility to women’s sport is driven as much by ideology as it is by economics. You only have to read the comments on any women’s sport content from a major media outlet, or the frothing misogyny that erupts whenever a woman so much as enters the conversation. This isn’t simple indifference, in the way that some are indifferent to snooker, or Formula One. It’s a genuine revulsion: the primal, guttural reaction of people who see in the mere presence of women’s sport a threat to their identity, their culture, their nauseating way of life.

This is partly why I find Lyon so powerful to watch. Occasionally you see them described as a cold, bloodless, winning machine. Yet in a year where sport has been grappling with its political dimension, we should remind ourselves that for most of history merely to exist as a woman in sport has been an overtly political act: a stand against those who want you cut down to size.

To play is to resist. When the world wants you servile, to occupy your platform, to claim your wage, to demand your stage is to make your own small protest. There are those who went before them, and those who will follow in their footsteps. But right now this is Lyon’s time, this is Lyon’s stage, and they alone are equipped to fill it.