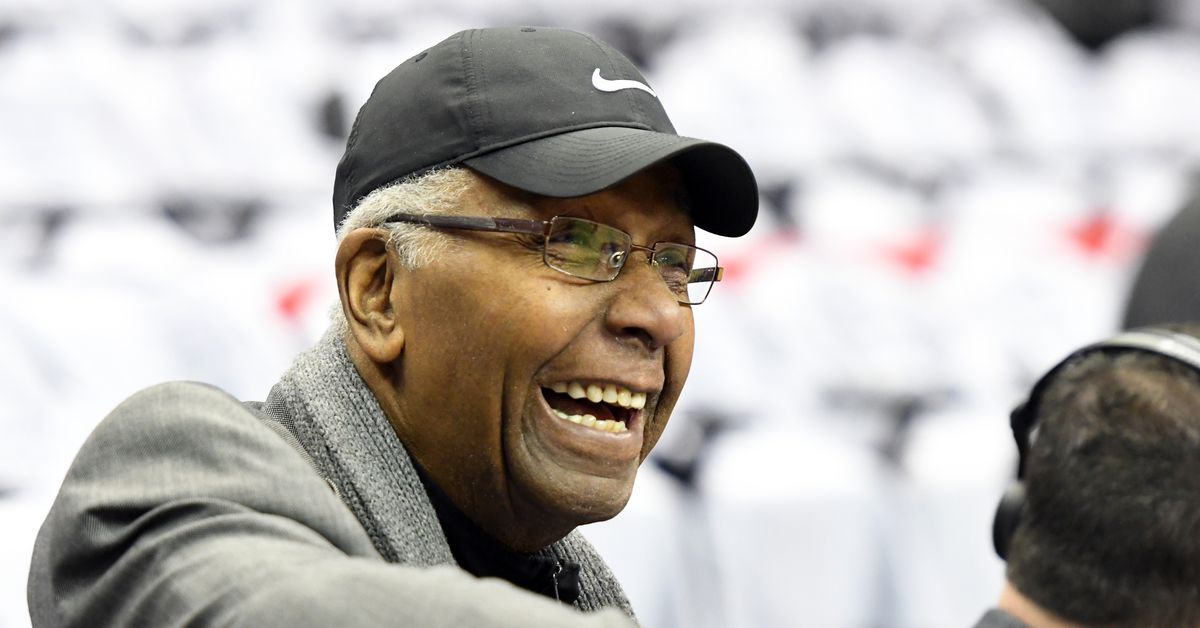 The world lost one of its great basketball coaches over the weekend when the legendary John Thompson passed away at the age of 78. Not only did Thompson send several future Hall of Famers to the NBA during his time at Georgetown, but he was also one of the biggest badasses college basketball has ever known.

Thompson was a legend before he put on a suit and became a coach. The all-time leading scorer at Providence, he would go on to the NBA and play for the Celtics, backing up Bill Russell in the mid-60s, and winning back-to-back championships with the team. Not satisfied with being a bit-player, even on a legendary team like Boston, Thompson retired from the NBA at age 25, deciding he wanted to move into coaching.

There was little doubt that Thompson was a coaching phenom from the jump. He took over St. Anthony High School in Washington, D.C. and led the team to a 122-28 record over his seven years with the program. This garnered the attention from colleges around the country, but especially Georgetown who noticed Thompson’s local success and believed in the young coach. It’s here that he not only changed basketball, but lives.

The names that went through Thompson’s Georgetown program and into the association is incredible. Patrick Ewing, Dikembe Mutombo, Alonzo Mourning, Allen Iverson — 26 players in total were drafted during his tenure, but there’s so much more to Thompson’s story than the NBA legends he coached.

The greatest achievement of his career came in 1989 when Thompson walked off the floor mid-game, and refused to coach against Boston College. He did this in protest of Proposition 42, a strengthening of academic eligibility rules by the NCAA prohibited scholarship freshman from playing if they didn’t meet academic standards. On paper this might seem fair, but as Thompson noted it disproportionately hurt African American athletes.

Rather than being based on any form of data, the NCAA used arbitrary SAT score thresholds as the determining factor for whether a player was eligible. Many coaches, Thompson included, voiced their concern over the rule. Studies showed that low-income students innately scored worse on standardized tests than their affluent counterparts, lacking SAT prep and a social environment for kids to succeed. Thompson didn’t shy away from voicing his displeasure at the rule.

“I feel it is a discriminatory thing, especially for a kid who is at a low socioeconomic level.”

Thompson became the most notable coach to protest, and prompted other coaches around the country to follow suit. The Georgetown student section cheered for Thompson each game he walked off the court following warmups, knowing that while it hurt Georgetown’s chances of winning, it stood for something bigger. A year later the NCAA remove Proposition 42, citing the protests as a key reason, adopting new standards in 1992 which allowed qualification if student athletes met any one of a number of benchmarks, including not just SAT score, but ACT and high school GPA as well.

There’s also an incredible story of Thompson trying to protect his players in 1989 that sounds so far-fetched it might be a tall tale, but has been confirmed to be absolutely true.

The popularity of Georgetown basketball in the 1980s naturally led to fame, and with that fame came unsavory characters. Most notably Rayful Edmond III, a drug lord who in his 20s was so infamous he’s credited with introducing crack cocaine to Washington, D.C. An avid basketball fan and Georgetown faithful, Edmond quickly caught Thompson’s attention by sitting court side at games with his entourage, and mingling with Georgetown players, particularly John Turner and Alonzo Mourning, both of whom had become friends with the drug lord.

Thompson called Edmond to his office for a meeting, and what began cordially quickly turned hostile. Standing up from his desk, the 6’10 Thompson towered over Edmond and told him in no uncertain terms that there would be serious consequences if the drug lord didn’t stay away from his players. Pointing a finger in Edmond’s face, Thompson unleashed a profanity-laden tirade, intimidating Edmond so much the drug lord never engaged with a Georgetown player again, and the coach’s words were so powerful he never suffered any reprisal. The coach believed it was his duty not just to coach players in basketball, but life — and would do anything to protect their futures. Even if this meant risking himself and yelling at a dangerous drug lord to do it.

Edmond was sentenced to life in prison later that year on 43 counts of drug trafficking and running a criminal enterprise. Thompson kept coaching, and winning — cementing himself in the Hall of Fame in the process.

John Thompson’s legacy extends far beyond the basketball court. Past the players who he brought in and turned into stars. He constantly put his future at risk to serve the kids he believed in. Rightfully enshrined in the Naismith Hall of Fame for his coaching tenure, the ripples from his actions will last for generations.