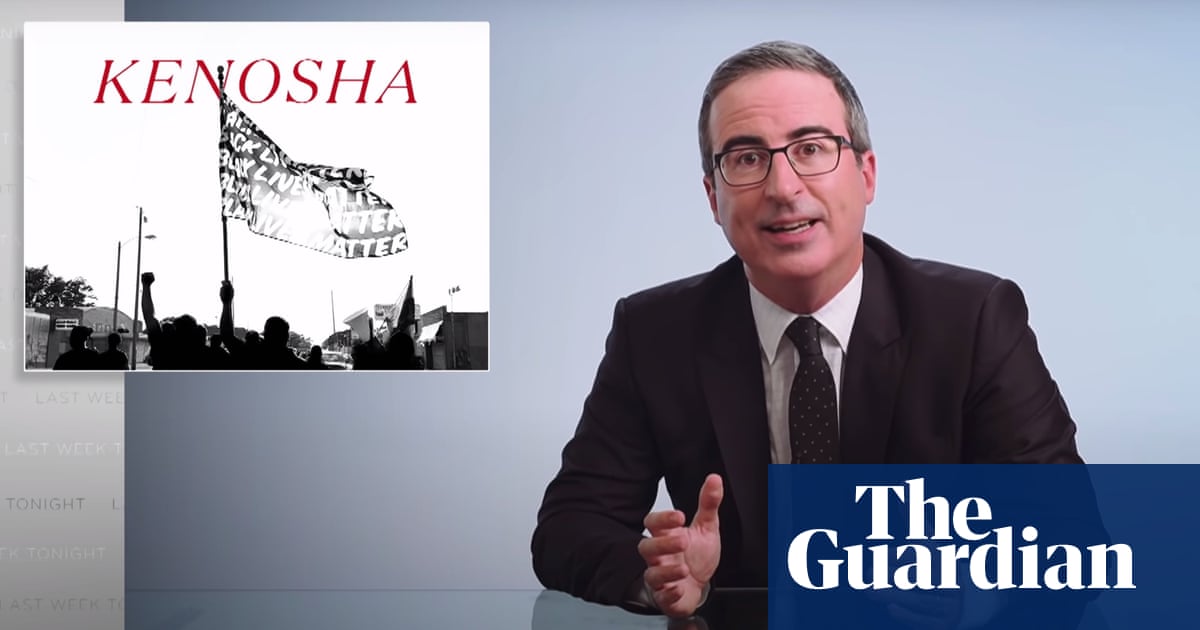 John Oliver returned to the white void of a socially distant Last Week Tonight to address “one hell of a week”, in which the Republican national convention projected a triumphant distortion of America disjointed from the police shooting of Jacob Blake in Kenosha, Wisconsin, which resulted in a week of protests, a wildcat strike by NBA and WNBA players, and the alleged killing of two protesters by a 17-year-old white vigilante.

But first, the convention, whose main theme seemed to be “telling lies in front of flags”, said Oliver, “because it was four days of a full-throated denial of objective reality.” Speakers claimed, among other things, that Trump is protecting patients with pre-existing conditions (“he very much is not,” said Oliver) and passed the Veterans Choice Act (“he didn’t”), while economic adviser Larry Kudlow spoke of the ongoing coronavirus pandemic using only past-tense verbs.

“I’m honestly surprised that at one point, a speaker didn’t try to claim that Trump invented parakeets, or that he stopped the murder hornets by sucking them straight out of the air,” said Oliver of the convention’s “blizzard of lies”.

The messaging was particularly confounding and insidious when it came to race in America, Oliver continued, as it “seemed intended not so much to win over black voters as to reassure white people that they could vote Republican without being racist”. Several speakers, such as the former South Carolina governor Nikki Haley, a child of Indian immigrants, or the South Carolina senator Tim Scott, a black man, insisted that racism in America was a largely personal obstacle relegated to the past.

However, “all of this overt talk of racial harmony was very much in conflict with the steady diet of barely disguised racial panic that viewers were also being fed,” said Oliver. The most flagrant example was Mark and Patricia McCloskey, a St Louis couple who gained notoriety in June after they brandished guns at Black Lives Matter protesters from their front lawn. In a virtual address to the convention, the couple dog-whistled about the destruction of American suburbs and claimed that “radical Democrats” will bring “crime, lawlessness, and low-quality apartments into now-thriving suburban neighborhoods”.

John Oliver on Trump’s border wall: ‘Stupider than I thought was possible’

“Think about how incendiary that message is: ‘violence and criminals are coming to your community in the form of low-quality apartments, and you must defend yourself,’” said Oliver. “Rhetoric like that and the worldview it encompasses has consequences.”

Case in point: the events last week in Kenosha, where Kyle Rittenhouse, a white 17-year-old from neighboring Antioch, Illinois drove to “defend” property and allegedly shot three people, two of whom died. “I don’t know if he saw the McCloskeys speak the night before he chose to drive to a city he didn’t live in to defend property he didn’t own,” Oliver said of Rittenhouse. “What I do know is that he’s an avid Trump supporter” – Rittenhouse was pictured sitting front-row at a Trump rally in Des Moines, Iowa, this January – “and Trump and his media ecosystem have been delivering essentially the same message as the McCloskeys for years now.”

Oliver played a clip of Fox News host Tucker Carlson working to justify Rittenhouse’s lethal actions: “How shocked are we that 17-year-olds with rifles decided they had to maintain order when no one else would?”

The events in Kenosha evince the “flagrant double standards baked into American society”, said Oliver, pointing to the contrast in police responses between Blake and Rittenhouse: police shot an unarmed Blake seven times in the back as he walked away, while they drove by Rittenhouse, who carried a rifle as he walked down the street.

“The events in Kenosha would be infuriating at any time, but it’s somehow especially infuriating that they took place in the same week where the RNC was desperate to reassure the country that America isn’t racist, while simultaneously fearmongering about violent crime threatening law-abiding citizens,” Oliver continued. The host played the words of Letetra Widman, Jacob Blake’s sister, who said in a press conference: “I’ve been watching police murder people that look like me for years …I’m not sad, I don’t want your pity. I want change.”

“This can’t be about pity. It can’t be about sympathy,” Oliver said. “This isn’t about what white people feel or say, this has to be about creating real change in a system that’s been built to be non-responsive.”

Republican commentators and RNC speakers can insist that the only way forward is peaceful and unobtrusive, he added, “but the fact is, that’s just not how it works”.

John Oliver: US is ‘making a mockery of the phrase a jury of your peers’

“The problem with purely symbolic protest is that it’s far too easy to co-opt,” Oliver continued. Take for example, he added, the sheriff in Kenosha, who two years ago horrifically argued in a press conference that, in response to five black youths arrested for shoplifting, “these people” should be locked in a warehouse for the rest of their lives, yet earlier this summer received positive media attention for kneeling with Black Lives Matter protesters for nine minutes.

Oliver concluded by returning to the RNC, which despite America’s “absolutely unacceptable” current situation, demonstrated that “where we still might end up going is genuinely terrifying”.

The convention showed “the danger in continuing to be governed by an administration that encourages the ugliest forces in American society,” Oliver concluded, “that lionizes threats of violence against peaceful protest, that tells us there’s no conflict between supporting law enforcement and supporting ‘our African American neighbors,’” a reference to Mike Pence’s speech, “and that insists that the best is yet to come.

“Which, given everything we’ve seen in the last four years, is sounding less like a promise, and more like a fucking threat.”