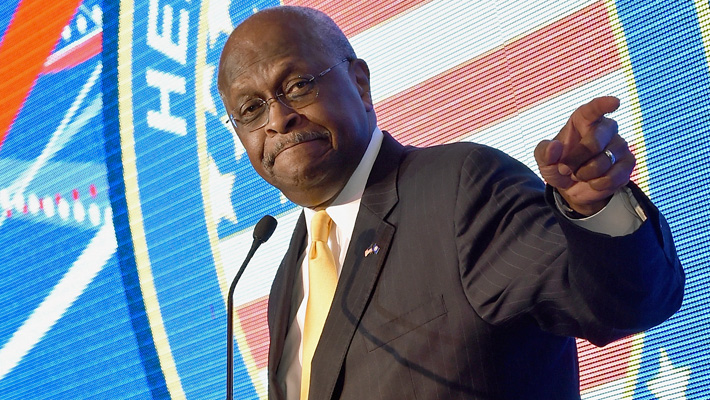 After attending Donald Trump’s infamous mask-free rally in Oklahoma, Herman Cain landed in the hospital where he died a month later from the coronavirus. Despite conspiracy theories to the contrary, Cain’s official cause of death was COVID-19, not cancer, which the former presidential candidate battled in 2006. So with that information in mind, Twitter users were very surprised on Sunday when Cain’s account tweeted a now-deleted claim that the novel coronavirus really isn’t that deadly.

“It looks like the virus is not as deadly as the mainstream media first made it out to be,” the account tweeted before linking to an article from the conservative outlet the Western Journal. As for how a dead man’s account is still tweeting, it’s now being used by family members and a social media team.

Obviously, claiming the coronavirus isn’t that deadly is a bold claim from an account whose previous owner literally died of the coronavirus. The reaction tweets practically wrote themselves.

Sir, the virus killed you. You died from it.

Tell that to Herman Cai—

Little social media tip: this would be more convincing coming from an account of someone who hadn’t died of coronavirus.

Others flagged the tweet for risking public safety and putting lives at risk. Not to mention, the questionable practice of allowing a verified Twitter account to continue to tweet despite the fact that its original owner is deceased.

You got to be a real sick POS to tweet from the account of a guy who died from #COVID19 that the disease is not that deadly. Herman Cain’s account really should be shut down. https://t.co/iR7AOZfdfb

Wild how Herman Cain, a Republican who died of Coronavirus after attending a Trump rally, has had his verified account hijacked by his own family and PR team to peddle conspiracy theories, propaganda, and smears. Maybe @TwitterSupport should, you know, look into this?

EFFING IRONIC: a person (Herman Cain) who died of #COVID19 tweets from the dead to tell us that COVID is not as deadly as it is made out to be.

➡️ Please report this account below for “fake” name. Cain passed away. https://t.co/c9X3tk3ms8

Despite deleting the offending tweet after it kicked off a social media feeding frenzy, it didn’t take long for Cain’s account to return to downplaying the pandemic.

Herman Cain’s account continuing to tweet arguments that the virus is not as serious as some fear has to be one of the most ironic moments of 2020. https://t.co/3fwBcIImrU

Of course, there is one possibility to consider courtesy of Patton Oswalt, and the way 2020 has been going, we probably shouldn’t rule it out.

Would anyone really be surprised if zombies are a thing now? Be honest.