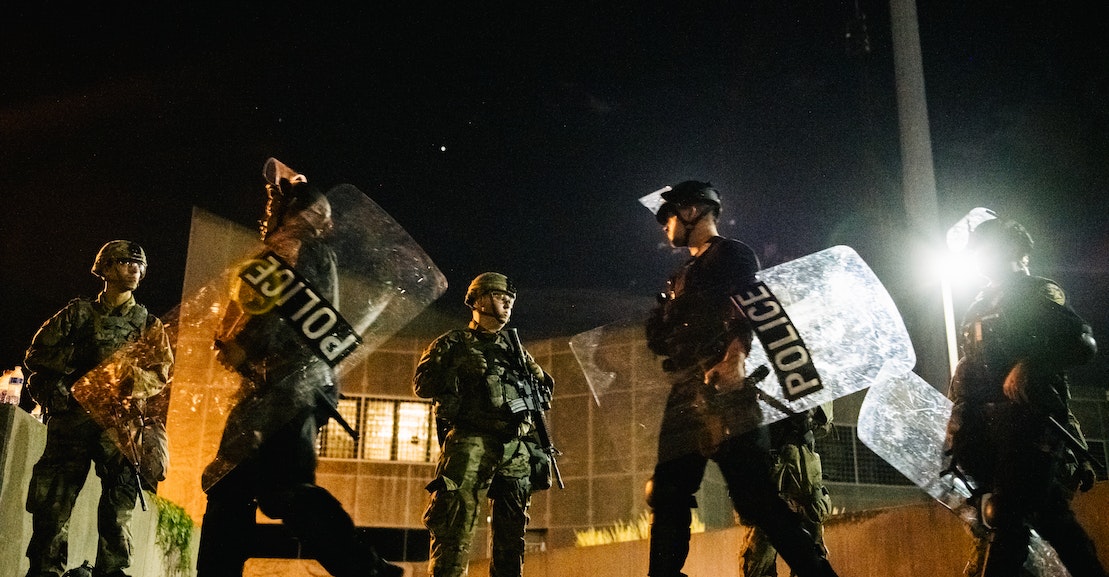 There have only been twelve days in 2020 in which police did not kill someone in the United States. As of August 22, the day before Officer Rusten Sheskey of the Kenosha Police Department shot and paralyzed Jacob Blake, police nationwide had killed 751 people this year, according to the Mapping Police Violence database. Going by years past, it’s entirely reasonable to assume that very few of the officers who have killed people in 2020 will be charged with a crime, and even fewer will be convicted. It is not an exaggeration to say that almost every day in this country, police get away with murder.

Police know this. So do others who see themselves as agents of law and order, like the ad hoc militia assembled on Facebook in the days following the Kenosha police shooting, with the call, “Any patriots willing to take up arms and defend our city tonight from evil thugs?” One who answered, Kyle Rittenhouse, stalked the streets of Kenosha with a rifle on the night of August 25. The white 17-year-old probably didn’t have those precise numbers in his head—of how many police have killed, how many have gotten away with it. Before the night was over, Rittenhouse had allegedly shot and killed two people and injured another. After, Rittenhouse wandered past police cars, still armed. He was allowed to flee the state. Before his first court appearance, he had already become a hero to the far right.

We know the police take the side of white vigilantes, as my colleague Alex Pareene wrote earlier this summer. When far right groups and even these more ad hoc formations of right wing novices descend on a town to wage violence against Black Lives Matter protesters, he wrote that police allow them to do so with “something more than impunity: an endorsement.” And these groups, in turn, are learning something from law enforcement’s stance towards them: Police and their tacit support endows right wing militias with some of that impunity.

Trump’s supporters in law enforcement and government play Kenosha as both a threat of what’s to come and an invitation to join in. Ron Johnson, the senior Republican senator from Wisconsin, said on CNN that one way to stop “the violence” and “the rioting” was to call on “citizen soldiers.” The head of New York’s largest police union, Pat Lynch, said on a Trump campaign press call on Monday that Joe Biden was a “Democratic apologist” for violence, who, if elected, would turn the whole country into Kenosha or Portland.

The same day, when asked if the White House would say anything about Kyle Rittenhouse, or if they believe vigilantes should stop showing up in cities to allegedly protect buildings, press secretary Kayleigh McEnany did not give an answer. She did say, though, that the United States “should have more police, not less.” On Tuesday, Trump will travel to Kenosha, where he will meet with police. He has remained silent as someone apparently took his own words as a directive: “when the looting starts, the shooting starts.”