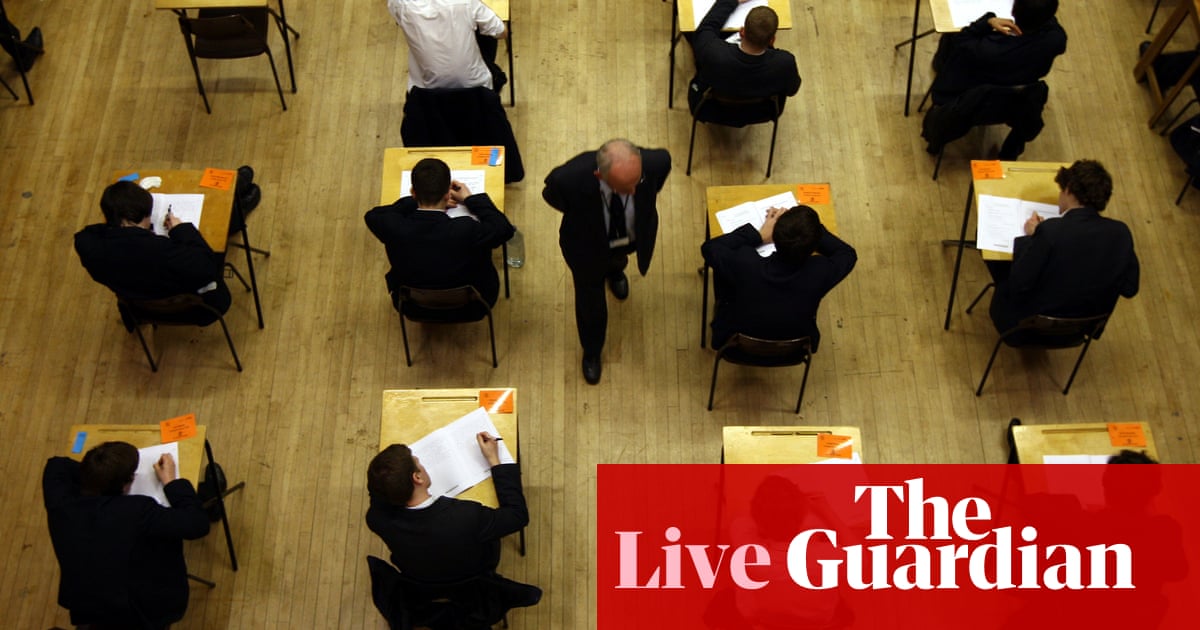 Another teacher — this time from Hampshire in the south of England – has written to express his concerns about the exam results u-turn:

I do feel for able students at low performing schools, but this is probably a significant minority of students, and should have been looked at individually. Grade inflation will hurt all students long term.

As a school we carefully looked at students, and fitted our predictions to previous results +/- 2% if all grades are increased then my students will suffer because we didn’t over-predict (which is a long-running issue with hopeful teachers, I know as a senior teacher of maths with many years experience.

The teacher, who asked for his name not to be used, added that he believes he caught Covid-19 in March — probably from a child via their parent, who subsequently tested positive — and is still suffering mild long term effects. He says he is a very healthy 40- something with shielding parents he has looked after through lockdown and has understandable concerns about getting back to class:

I want to teach, but am worried!

Teachers and students in England are confused about how the government’s “triple lock” on exam grades will work in practice.

A substantial issue is consistency. For example, for my A-level students I don’t actually give them a mock grade as I want to show the students that grade boundaries change every year. Therefore, they are given the score they got on that paper and then 3 years of different grade boundaries in which they can then see what they would get each year. This encourages them to see it as about the marks, not the grades. They have never received a centrally stored mock “grade”. Therefore, can my students simply pick the lower grade boundary years and get better grades?

If anyone from the department of education is reading, please can you answer this teacher? (I will ring the press office too).

I’d love to hear from young people waiting for their A-level and GCSE results in England: do you feel happy that you can now fall back on your mock grades and will have the opportunity to re-sit the exams in autumn?

My email is helen.pidd@theguardian.com – please make clear if you are happy for me to use your response in this blog.

Interesting thread from the Guardian’s education editor, Richard Adams, about the government’s about-turn on exam results in England. Richard believes the move to allow students to use mock exam grades will not put the controversy to bed.

Much unhappiness among the legal eagles of Greater Manchester, where Manchester crown court will stay closed for the rest of the week after six members of staff tested positive for Covid-19.

Her Majesty’s Court and Tribunal Service (HMTS) told the Manchester Evening News last night that the court will remain closed “until further notice” after court and security staff tested positive for coronavirus.

The court only recently started hearing trials again, under pressure to get through a backlog of cases which already stood at 37,000 even before lockdown across England and Wales.

Tim Storrie, QC, is one of many barristers exasperated in the way the closure was announced, saying “trust evaporates” in the system when the legal profession is not properly briefed on the latest developments.

Jaime Hamilton, QC, said he was “pretty cheesed off” to find out via Twitter.

The court building was forced to close for a deep clean last Thursday morning, but reopened later that afternoon.

But on Monday, the court had to shut again, after further number of people tested positive for the virus over the weekend, the MEN reported. All have provided details of their close contacts.

The chancellor, Rishi Sunak, has responded to today’s bleak economic figures, which show Britain has entered the deepest recession since records began.

“Hundreds of thousands of people have already lost their jobs, and sadly in the coming months many more will. But while there are difficult choices to be made ahead, we will get through this, and I can assure people that nobody will be left without hope or opportunity.”

The Office for National Statistics said gross domestic product, the broadest measure of economic prosperity, fell in the second quarter by 20.4% compared with the previous three months – the biggest quarterly decline since comparable records began in 1955.

Read the full story by my colleague Richard Partington here.

Unsurprisingly, Labour has something to say about the government’s change of heart on exam results in England and Wales.

Shadow education secretary Kate Green, the MP for Stretford and Urmston in Greater Manchester, said one of the problems is many students would not have sat mock exams.

“I don’t think this is a perfect answer at all to what is now becoming a really chaotic situation,” she told BBC Breakfast.

“And very, very worrying for (A-level) students the day before they’re due to get their results finding the system changing again.”

She added: “Not all students will have even taken mock exams and what we’ve now got is a system which clearly is not fit for purpose. The government itself is clearly acknowledging that by announcing more and more changes to it.”

She insisted there needs to be a “proper robust” appeals process for students so that they are not dependant on “systems that may not fairly reflect the work that they’ve done”.

Giving students the opportunity to retake A-level exams in October is “not an adequate response”, Green said: “While it’s useful to have as a backstop, there are a couple of concerns with it. That will come too late in the day for students who, for example, want to start a college course in September, they won’t have their results on time.”

She questioned how the retakes will be organised: “Schools are already having to make a lot of changes to the school day, to the school premises, to how they organise school when children go back next month because of the need for social distancing.

“So we’re still waiting for more information as to how it is that schools will be supported to run these retakes. It’s important to have them as a backstop, but that is not either an adequate response.”

The schools minister has refused to apologise for the last minute u-turn over exam results in England, insisting there has been “no confusion” over how they will be awarded.

Talking on BBC Breakfast, Nick Gibb defended the government’s eleventh hour decision to allow A-level and GCSE students in England to use their mock exam results.

“No, there’s no confusion. We’ve been clear from the very beginning,” said Gibb about the announcement last night of a “triple lock” which means students getting A-level and GCSE results can accept that grade, based on teacher estimations, or change it for a mark gained in a mock exam. Or they can instead choose to take the exam in the autumn.

“We apologise to nobody for finding solutions, even at the eleventh hour, to stop any student being disadvantaged from this system,” said Gibb.

The move followed a climb-down in Scotland yesterday when the SNP-led government agreed to reinstate over 100,000 exams grades following a furious row that saw pupils protesting over “classist” downgrades.

You can watch a clip of Gibb saying all of the above with a straight face — if you’re into that sort of thing:

Good morning from sultry Stockport. I’m Helen Pidd and I will be looking after the blog for a few hours this morning. You can email me helen.pidd@theguardian.com

*This post was edited to clarify that it relates only to England.