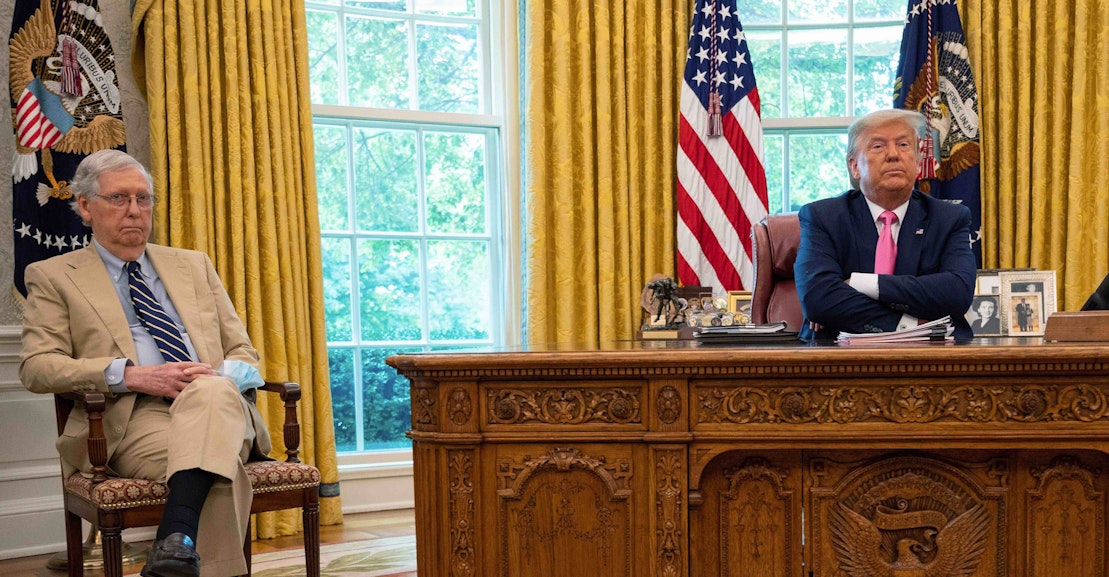 As July ended, the Department of Commerce announced that the economy had contracted by nearly a third; the Department of Labor reported that 1.43 million Americans had lost their jobs. And shortly after those announcements, the Senate adjourned for a long weekend. Over the course of that weekend, at the start of August, the enhanced unemployment benefits Congress created in March to soften the economic blow of the Covid-19 pandemic expired. Thirty million people lost their $600 weekly benefits.

It came at the midpoint of two weeks of failed negotiations over how best to continue economic relief efforts. Senate Minority Leader Chuck Schumer and House Speaker Nancy Pelosi were in the midst of contentious talks with Treasury Secretary Steven Mnuchin and White House chief of staff Mark Meadows. Notably absent from the negotiations were the president of the United States, Donald Trump, and the Senate majority leader, Mitch McConnell. The two most powerful political figures in the country, two men whose rise to power define our political epoch, had nothing to contribute to a negotiation about what the government should do in response to a crisis.

These aren’t just the two most powerful people in Washington; they’re the two most powerful, conservative American politicians in more than a decade. They represent the pinnacle of conservative power, and they excused themselves from the room for the most consequential negotiations of the president’s term so far, only to watch those negotiations fall apart completely.

McConnell, for his part, seems resigned to playing no major role in the process, largely because his Senate majority includes lots of people who are not up for reelection this year and who are congenitally opposed to the prospect of the government helping anyone. It might be different if he had his own opinions on the matter, but he, too, is largely uninterested in using the power of the Senate to do anything besides confirming judges who will stop future Senates from imposing regulations and taxes on the industries and plutocrats that have acted as his patrons.

Nor is it particularly surprising that President Trump has not been directly involved in the negotiations. It’s not simply that he doesn’t understand policy; he understands the broad outlines, grasping intuitively that politics is about apportioning rewards and punishments to various groups. It’s that he doesn’t understand which policies he is supposed to favor as an ostensibly conservative Republican president. That is why he hired Meadows, whose job, whether Meadows understands it in these terms or not, is to sabotage Trump politically and prevent a betrayal of conservative principles.