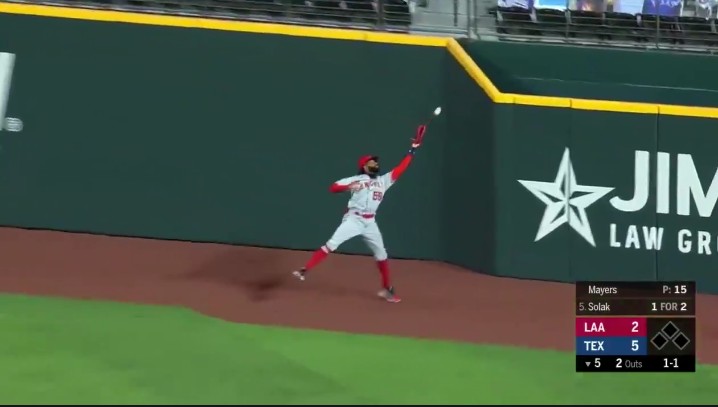 Baseball continues rolling along with its shortened, 60-game season despite some hiccups in the form of teamwide outbreaks in Miami and St. Louis. One of the fascinating parts of the shortened season is how, in a sport that is typically defined by being a marathon of 162 games, every game and every key moment is magnified — for better or worse.

On Sunday, for the Los Angeles Angels, Jo Adell had one of those unfortunate moments that may turn out to be painful for his team when Nick Solak hit what should’ve been a fairly innocuous fly ball to the warning track in right field, with Texas up 5-2. However, as Adell tried to reel in the ball for an out, he somehow not only dropped it but slapped the ball up in the air and over the fence for a home run to give the Rangers a 6-2 lead.

It’s the absolute nightmare of every outfielder to have their Jose Canseco moment — although at least this one wasn’t a ball bouncing off his head and over the wall — and while the Angels would get that run back in the top of the sixth, it gave Texas an added insurance run as a gift that L.A. really didn’t want to provide them.