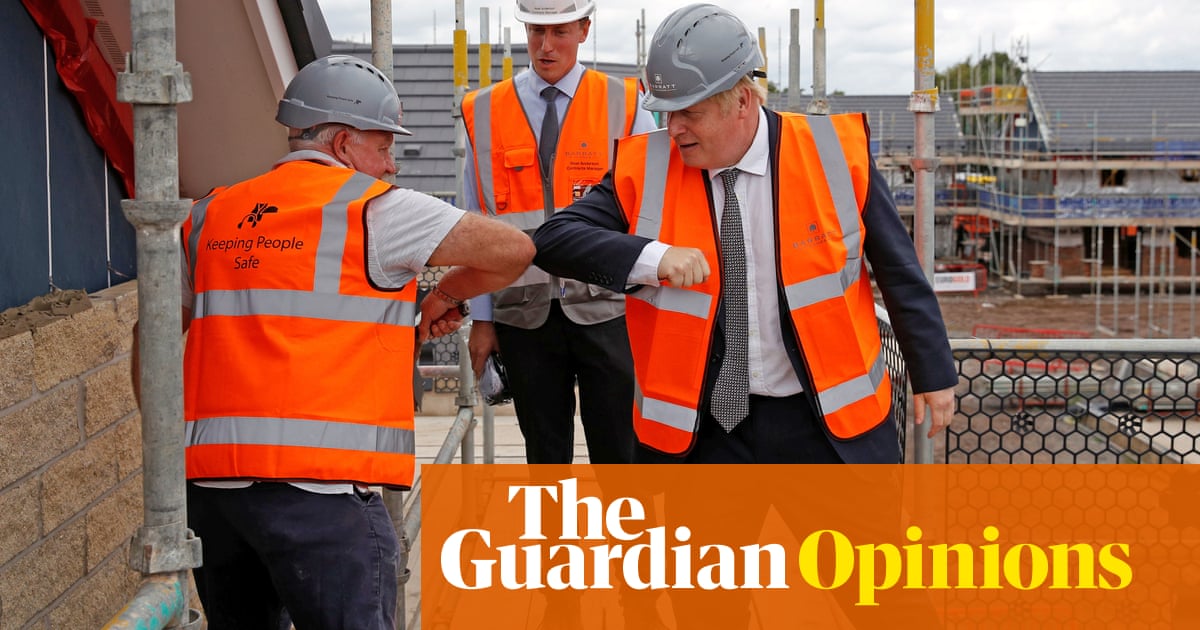 Just over a month ago Boris Johnson promised to deliver the most radical reforms to England’s planning system “since the second world war”. This week we found out what that means in practice, and it’s clear the prime minister wasn’t joking.

In a new white paper the government has set out sweeping plans to “cut red tape, overhaul the planning process and build better, greener homes faster”. But even by the standards of the modern Conservative party, this is no ordinary regulatory bonfire. In one fell swoop, the entire system that has governed land use in England for more than 70 years has been set ablaze.

Ever since the Town and Country Planning Act 1947 was enacted, landowners and developers have had to apply to their local authority for planning permission to build new property or convert existing buildings from one use to another. The act was an elegant attempt by Clement Attlee’s Labour government to balance public and private interests: land was kept in private ownership but the right to develop it was nationalised.

But under the reforms published this week, this will be replaced with a zoning system under which all land will be designated as one of three categories. In so-called growth areas, permission will be granted automatically without having to submit a planning application. In “renewal” areas, which are expected to cover urban and brownfield sites, permission will be automatically granted subject to some basic checks. Only in “protected areas”, such as the green belt and areas of outstanding natural beauty, will stricter development controls apply.

At first glance this may sound innocent, perhaps even sensible. But, concealed beneath the cuddly rhetoric about “affordable, green and beautiful homes”, lies a ferocious attack on democracy. Under the current system there are two opportunities for democratic participation in the planning system: first, at the formation of a local plan which sets out the strategic priorities for development in an area; and then at the planning application stage of individual developments, which tends to be many years later. Under the proposed reforms, the second stage of consultation will be scrapped. As a result, only those with psychic powers to foresee future developments will be able to object to them at the initial plan-making stage. Democratic oversight of individual developments will soon be a thing of the past.

This is, of course, intentional. More than anything else, the reforms serve to transfer power away from local elected representatives and towards private developers, who will be able to build whatever they like, unopposed. The significance of this should not be underestimated. From now on, our built environment will be shaped around the interests of shareholder value, unchecked by democratic accountability.

Some may argue that this is a price worth paying to break the logjam in housing supply. But, according to the Local Government Association, nine out of every 10 planning applications are approved by councils anyway. Some maintain that this figure is misleading, because only those who expect planning permission to be granted bother applying. But more than a million homes that have already been granted planning permission in the last decade have not yet been built. If the planning system really is the problem, why have these homes not been built?

The government’s reforms are premised on the assumption that the planning system is to blame for a shortage of housing, but curiously the white paper presents no evidence to support this claim. According to information obtained by Shelter under a freedom of information request, the government hasn’t even bothered to assess what impact its new proposals will have on housebuilding.

Luckily however, in 2018 the government commissioned an independent review to identify the drivers of slow construction rates in England. The so-called Letwin review found that the main bottleneck on housing supply isn’t the planning system, but the “market absorption rate” – the rate at which newly constructed homes can be sold on the local market without materially disturbing the existing market price.

In a system where development is left in the hands of profit-maximising firms, there is a strong incentive to build strategic land banks and drip-feed new homes on to the market at a slow rate. The reason for this is simple: releasing too many homes at once would reduce house prices in the area, which in turn would reduce profits.

By handing over even more power to private developers, the government’s reforms will make this problem even worse. Combined with the recent extension of permitted development rights (allowing change of use), the reforms could lead to a new generation of slum housing, as the Royal Institute of British Architects and others have warned. And by scrapping section 106 provisions, the future of social housebuilding has been cast into doubt.

All of this raises the question: why is Boris Johnson’s government really dismantling the planning system? As ever, it helps to follow the money.

As openDemocracy has revealed, the Conservative party has received £11m in donations from individuals and companies linked to the property sector since Johnson became prime minister. These donors are no doubt expecting a return on their investment. Robert Jenrick’s cosy relationship with Richard Desmond may may not be the last scandal to catch the limelight.

From the opening sentence to the final full stop, the government’s white paper emits a strong stench of corporate lobbying, and represents a slap in the face to evidence-based policymaking. At best the reforms represent an ideological crusade to undermine local authorities and hand over more power to private developers. At worst, they are part of a coordinated attempt to undermine English democracy. Either way, they must be resisted every step of the way.

• Laurie Macfarlane is economics editor at openDemocracy and a fellow at the UCL Institute of Innovation and Public Purpose. He is co-author of Rethinking the Economics of Land and Housing