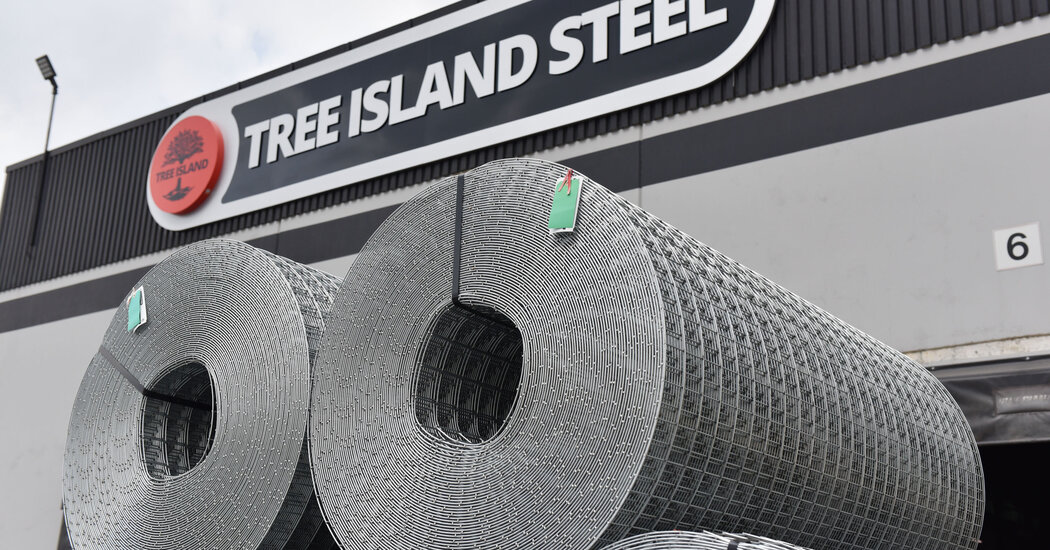 WASHINGTON — President Trump announced Thursday that he was reimposing a 10 percent tariff on Canadian aluminum to help struggling American producers, a step that is likely to incite retaliation and worsen ties with Canada just one month after the countries’ new trade deal went into effect.

Speaking at a Whirlpool factory in Clyde, Ohio, Mr. Trump said that he had signed a proclamation earlier on Thursday that would reimpose the levy on Canada, accusing the country of “taking advantage of us as usual.”

“To be a strong nation, America must be a manufacturing nation and not be led by a bunch of fools,” the president said. “That means protecting our national industrial base.”

Mr. Trump imposed tariffs on steel and aluminum from Canada, Mexico and the European Union in early 2018, prompting those countries to respond with their own tariffs on American goods. The levies on imports from Canada and Mexico were not lifted until the following year, when the countries reached an agreement as part of the negotiations toward a new North American trade deal.

But the United States retained the right to reinstate them if it observed a spike in metal imports, which Mr. Trump cited on Thursday.

“My administration agreed to lift those tariffs in return for a promise from the Canadian government that its aluminum industry would not flood our country with exports and kill all our aluminum jobs, which is exactly what they did,” Mr. Trump said Thursday. “Canadian aluminum producers have broken that commitment.”

For months, American and Canadian officials have debated whether Canada’s rising imports violate that agreement or constitute a surge. Imports of Canadian aluminum have risen since the tariffs were lifted last year, but they remain below levels seen within the last few years.

The American aluminum industry has struggled to compete in recent years with producers in countries like China, Russia, Iceland, the United Arab Emirates and Canada that offer generous state subsidies or benefit from cheap electricity. Today, only a handful of American aluminum smelters, which make raw aluminum out of bauxite, still operate.

Supporters of the tariffs say that they have helped to revive American production, but that imports from Canada and the economic slump that accompanied the pandemic had once again thrown the industry into disarray. In April, the aluminum giant Alcoa idled a smelter in Ferndale, Wash., saying that production there was “uncompetitive.”

Two American companies with domestic aluminum capacity, Century Aluminum and Magnitude 7 Metals, have lobbied intensely for the tariffs to be reimposed. In a statement Thursday, Michael Bless, the chief executive of Century Aluminum, said the move “demonstrates this administration’s continued dedication to restoring the U.S. aluminum industry” and “helps to secure continued domestic production of this vital strategic material.”

But the rest of the aluminum industry, which has operations spread around the globe, including in Canada, has fought against the measure. The multitude of industries that use aluminum to make products including cars, beer cans and washing machines, have also argued against the levies, saying they increase their costs and make their products less competitive globally. Even Whirlpool, the appliance maker where Mr. Trump made his announcement on Thursday, has seen its costs for raw materials rise as a result of the metal levies.

In June, executives from more than 15 of the world’s largest aluminum companies, including Alcoa, Constellium and Novelis, sent a letter to the Trump administration arguing against the tariffs.

“Fully 97 percent of U.S. aluminum industry jobs are in mid-and-downstream production and processing,” the letter read. “These jobs depend on a mix of domestic and imported primary aluminum, including from countries like Canada.”

Jim McGreevy, the chief executive of the Beer Institute, a trade association of beer producers and importers, said his group strongly opposed the decision.

“Since the implementation of aluminum tariffs in 2018, the American beverage industries have paid more than $582 million in tariffs,” he said. “Increased aluminum premiums due to tariffs increase the cost of beer production and force brewers to make difficult business decisions — especially amidst a global pandemic that has reduced overall sales while simultaneously increasing demand for aluminum cans.”

In a statement, Myron Brilliant, the executive vice president of the U.S. Chamber of Commerce, called the move “a step in the wrong direction” and urged the administration to reconsider.

“These tariffs will raise costs for American manufacturers, are opposed by most U.S. aluminum producers and will draw retaliation against U.S. exports — just as they did before,” he said.

Mr. Trump’s metal tariffs have been imposed with the legal rationale of protecting American national security. That has particularly irked Canadians, who count themselves as America’s closest ally.

“It’s totally misguided, it’s the wrong thing at the wrong time,” said Jean Simard, the president and chief executive of the Aluminium Association of Canada. “We’re still in a Covid-related downturn.”

Mr. Simard said that shipments of basic aluminum ingots to the United States from Canada had risen after automakers and other importers of more sophisticated aluminum closed their factories because of the pandemic. But he said that with renewed manufacturing in the United States, the market was rebalancing.

The tariff will most likely cause American industries that use aluminum to turn to China and Russia for their supplies, Mr. Simard said. Currently, according to Mr. Simard, the United States aluminum production capacity can meet only about one-sixth of the country’s consumption of the metal.

It remains unclear how or whether Canada will retaliate for the tariff. In a Twitter post Thursday, François Legault, the premier of Quebec, which is home to most of Canada’s aluminum production, called on Prime Minister Justin Trudeau to impose retaliatory tariffs, saying he was “very disappointed” by the American move.

The Canadian aluminum industry, Mr. Simard said, will push the Canadian government to apply tariffs on American-made products made from aluminum, including beer cans and bicycles, for which there are Canadian substitutes.

“We can drink Canadian beer out of Canadian cans,” Mr. Simard said.