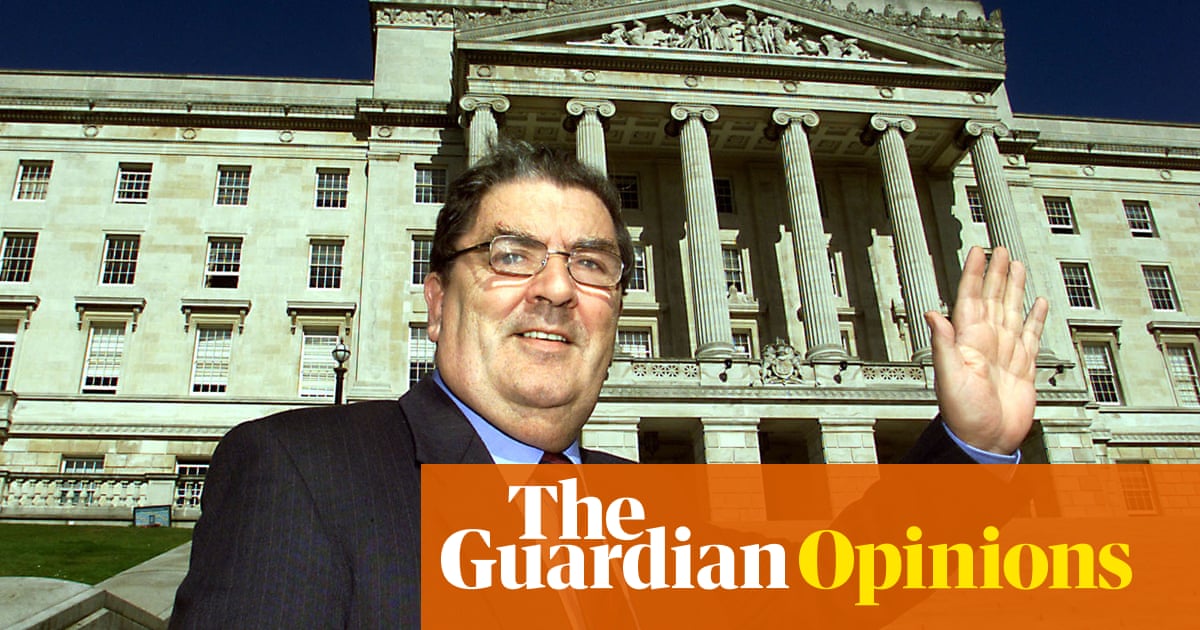 It is more than 40 years since my first interview with John Hume. It took place in a smoke-filled bar in Derry after a boxing match. Up the hill on the Diamond, Derry’s central square, armed soldiers scampered from doorway to doorway to avoid the danger of sniper fire. Down in the Bogside, a pub bore the slogan Informers Will Be Shot. The IRA hunger strike was still two years in the future. Ceasefire was on no one’s agenda, let alone political agreement. But the first and main thing that Hume talked about that day was power-sharing and the road to peace.

Back then, half of his life lay ahead. Yet even then it was as if Hume carried a historic burden on his hulking shoulders. He talked quietly, I remember, and he measured every word. He explained what he believed was needed for Derry, for Northern Ireland, and for the island of Ireland. He wanted the different traditions equally recognised. He wanted them to accept each other within a shared political space. And he wanted them to make the best of it, together, for the common good, rather than turning every last issue into a zero-sum battle. Yet the way ahead seemed dauntingly impenetrable.

Hume was complicated – part intellectual, part policy wonk, part dealmaker. But he had a kind of greatness about him, even back then. He possessed an enviable palette of political leadership skills, from his care over details through his relentless networking to his ability to expound a clear vision. And he was a grassroots person. He rarely forgot a face, at least until the sad decline of his last decade. Yes, he could sometimes be crafty and even devious, but he was always marching on a pretty straight path. Best of all, it was the right path.

To many in the Britain of 2020, Hume is already a remote figure. Some of that is understandable. Some of it is not. The understandable bit is that, in no small way because of him, the events in which Hume played such an essential part are now increasingly distant. You must be in your 40s to have a first-hand recollection of the turmoil of the Troubles and of the peace process in which Hume was the catalyst and key player. New dramas, of coronavirus and climate change, not the problems of Northern Ireland, dominate today’s world.

Yet Hume’s remoteness is also attributable to his Irishness. Too many people in Britain do not think about Ireland much, even when there is a lot going on there that should concern them. British politicians, so often insular and complacent, and certain that no one has much to teach them, share this tendency too. Insofar as they look to other political cultures at all for lessons and inspiration they rarely look to Ireland.

Since his death, Hume has been hymned as Ireland’s Martin Luther King. Several of the messages and addresses read out at Hume’s funeral in Derry today, including one from Bill Clinton, made these comparisons. Yet there is political laziness at work here. It conflates too many things. It tries to idealise Hume as if he was some kind of global icon of freedom, with plenty to inspire the inhabitants of the world’s autocracies but nothing much to teach fortunate countries like our own.

In fact, Hume has plenty to teach modern Britain. He was a political leader who was confronted with a deeply divided society. He was a bridge builder where flag-based identities and community suspicions loomed suffocatingly large. He recognised that building bridges meant talking to, and listening to, the extremes as well as the centre ground. He saw there was no future for a system in which one tradition exercised total power and ignored the excluded. He took the long view about the hard journey that had to be taken. And he never gave up on it.

Hume’s politics went far beyond Ireland. Most of the problems Hume confronted in Ireland are also present in modern Britain. Britain is bitterly divided by Brexit, by class and by cultural values. Flag-based nationalism is rising, not just in Scotland. British politics is zero-sum and vindictive. Lives are impoverished and wasted as a consequence. Don’t assume that the absence of the bomb and the Armalite means modern Britain has nothing useful to learn from what Hume and others achieved in Northern Ireland.

Hume always talked about the need not for a united Ireland but for an “agreed” Ireland. Such an Ireland remains his precarious legacy. But there is a deepening gulf in British politics where an agreed Britain should be too. Bridging it is becoming epically difficult. It won’t be achieved by a third-rate leader like Boris Johnson. But the work of political compromise is now as urgent across Britain as it was in Northern Ireland 40 years ago. They may have buried Hume today. But they must not bury his stubborn pragmatic inclusive politics. Britain too needs a John Hume, who never gave up.

• Martin Kettle is a Guardian columnist