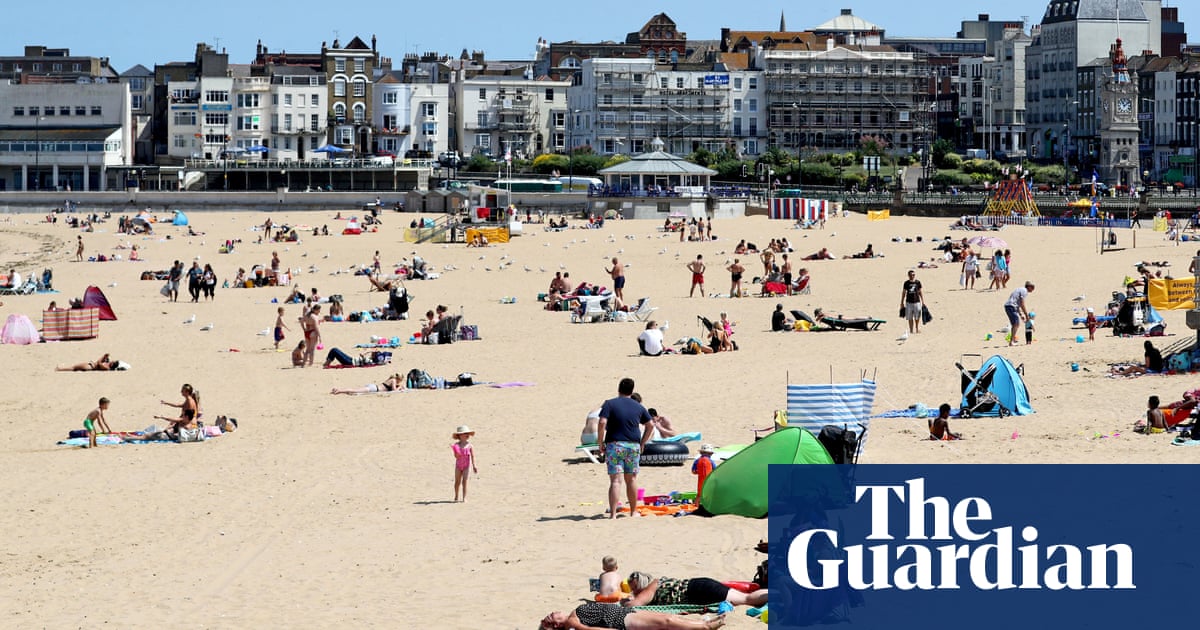 Holidaymakers in Kent have been asked to avoid four of the county’s beaches after fears some have become “unmanageable” because of the number of visitors.

The coastguard had its busiest day in more than four years on Friday – when the UK recorded its third hottest day on record – dealing with 329 incidents. Local authorities have expressed concern that there are not enough lifeguards as crowds swell.

Thanet district council asked people to avoid four of the area’s beaches, including Margate Main Sands, because they had become too crowded. The council had already issued a “stay away” warning for three beaches around Broadstairs – Joss Bay, Botany Bay and Viking Bay – on Friday.

The UK’s hottest day so far this year – in pictures

The council leader, Rick Everitt, said the RNLI only had a certain capacity and that “exceptional” numbers of people – he claimed the most since the advent of foreign package holidays – were visiting Thanet’s beaches.

“Early on, it became clear that they were going to reach levels of which we were concerned about,” he said. Lifeguards are “on seven Thanet beaches this summer, which is slightly fewer than usual, and they’re doing a great job where they are but they don’t have unlimited resources to deal with people in the water.

“If you have too many people on the beach, it just becomes unmanageable from that point of view.”

He added: “We’re happy for people to come to Thanet, our economy is dependent on it, and obviously a lot of businesses in the coastal areas are struggling, because they missed so much of the season.

“So it is a bit of a balancing act for us, because we don’t want to be saying ‘don’t come’, as we know small businesses around our seafront are desperate for the revenue.”

He said the facilities on the beaches, such as toilets, were not sufficient for the number of tourists, while authorities would be able to cope better if demand were better distributed along the coastline.

“It’s an irony isn’t it, that seaside towns have spent years complaining that people no longer visit them because they go abroad,” he added. “We’re getting greater numbers than we’ve ever seen since package holidays became a thing.”

Daytrippers flocked to beaches across the country on Friday, when the Met Office reported temperatures reaching highs of 37.8C at Heathrow airport at 2.41pm and 37.3C at Kew Gardens in west London.

Many calls to the coastguard on Friday were about people being cut off by the tide, missing children and swimmers getting into difficulty. The coastguard said there were 232 callouts for rescue teams in the total of 329 incidents. Lifeboats were called out 129 times, aircraft 22 times and hovercraft three times.

There were 45 incidents along the Essex and Kent coasts. The Met Office said temperatures would be closer to average on Saturday, but it would still be fairly warm in the south-east where temperatures could reach 27C.

A search is under way for a 15-year-old boy who has been reported missing in a lake at a shopping centre in Essex. Police were called out on Friday night after reports that a teenager had gone missing at the Lakeside shopping centre in Thurrock.

Supt Craig Saunders said: “Our investigation has identified that he was last seen at around 8.50pm on the lake. We will be working with specialist search teams to carry out an extensive search of the lake and surrounding area today.”