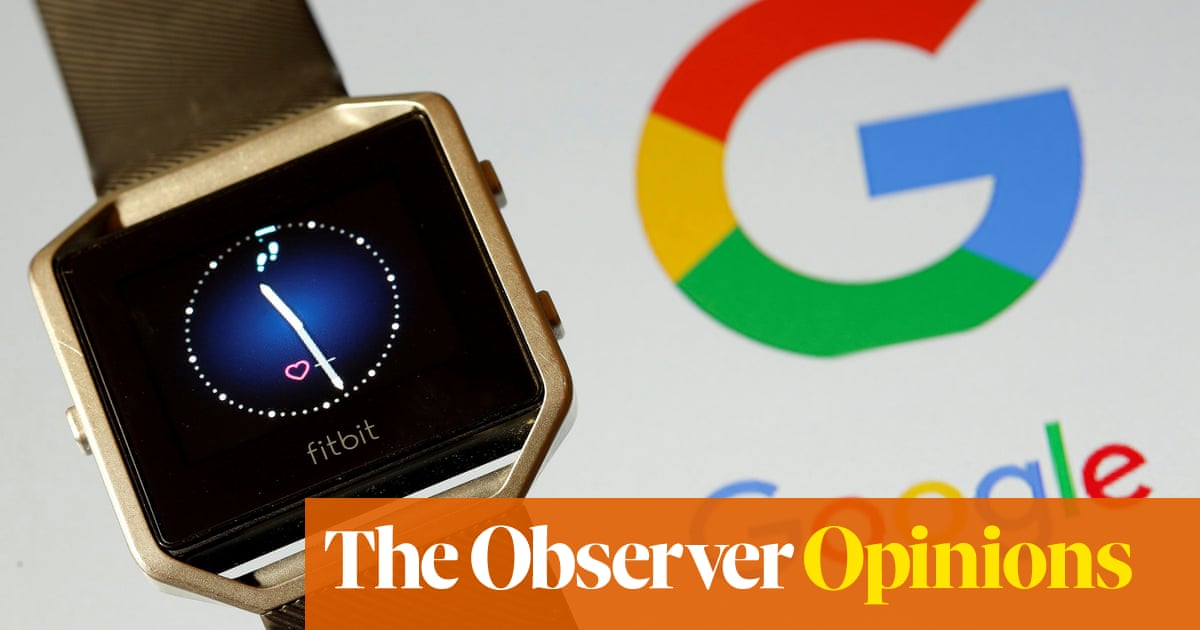 Healthcare is going to be one of the biggest corporate battlegrounds of the next 20 years.

In the UK, public and private health spending already accounts for 10% of national income (GDP). In the US, health spending eats up around 17% of the economic pie. As the last of the baby boomers settle into retirement by 2030, those figures are expected to rise by at least half and, if social care is added, possibly double by 2040.

No wonder the tech giants are pitching themselves not so much as mobile phone providers, search engines or chip makers, but as health companies that stand by their customers, administering vital data about their heart rate, their cholesterol and how they can access the best online advice on conditions ranging from acne to Covid-19.

This week, the EU is expected to tell Google that its $2.1bn purchase last year of fitness-tracker company Fitbit will be investigated in an antitrust probe. Brussels wants to determine whether the US search engine is accessing health data to enhance its vast advertising business.

Google makes its own smartwatch operating system, as do Apple, Samsung and several Chinese tech firms. The health data they acquire through the various devices they run on is like gold dust in a health-obsessed age. Ratings and sales of watches using Google’s software are relatively low, so what better than to access millions of Fitbit users and take out a competitor at the same time? Google denies it will use the information to help advertisers target customers. But if the deal is allowed through, we will probably never know what it does with the information.

Britain has a line of defence against this exploitation thanks to its public health system. But the NHS is going to increasingly rely on the tech giants for services, as it recently found after its failed experiment in developing a coronavirus test-and-trace app. This was ditched in June in favour of one provided by Apple and Google.

As in so many areas of economic life, the Covid-19 pandemic is going to accelerate a trend already well under way.

All the tech giants have used their ballooning share valuations to buy up smaller rivals and dominate digital markets. Of all these digital markets, health is the key focus for future growth, and any business with health information is a potential target. And that is not just to feed the databanks, but to maintain the image that Apple’s Tim Cook, Facebook’s Mark Zuckerberg and Google co-founders Larry Page and Sergey Brin have cultivated of being supporters of the nation’s health. It is a marketing strategy that acts as a defence against antitrust investigations, screaming as it does that an attack on the tech companies is an attack on their ability to support health services.

Much has been written about how easily we give away personal data, which is then used to sell us goods and services we didn’t know we wanted and sometimes don’t need.

There is little appetite in the US Congress to tackle corporate overreach, though a reinvigorated anti-trust agenda is part of the Joe Biden manifesto

Proponents of the free market will argue that smartwatch wearers are perfectly capable of discerning which adverts are useful to them, and whether products are overpriced or come with onerous terms and conditions. Yet the more AI and data manipulation become the bread and butter of corporate research and development, the more tilted the economic playing field becomes in favour of corporations and against consumers.

There also wider considerations. The EU commissioners won’t be looking at the consolidation of the market for health data, merely the vertical integration of Google’s services – much as it examined and then banned Microsoft from bundling its Explorer search engine with its other software more than a decade ago.

But it should examine how consolidation in many industries, not just health technology, is allowing major corporations to set prices and terms of trade.

There is little appetite in the US Congress to tackle corporate overreach, though a reinvigorated anti-trust agenda is part of the Joe Biden manifesto.

Britain, likewise, is the friend of the oligopolist, and that is not going to change now that the government considers itself broke and in need of all the private investment on offer, even for a test-and-trace app.

Spending on health is inevitably going to increase over the next 20 years as the last of the baby boomers start collecting their pensions. The question must be how much of this economic activity will be sucked away in profits to the tech firms.

Their soaring share prices suggest that, NHS or no NHS, Britons will come under the same pressure as US consumers to adopt hypochondria as a way of life.