The old town of Havana has sheltered many famous faces over its 500 years, Alexander von Humboldt and Ernest Hemingway among them, but few more loved than Eusebio Leal Spengler, who died on Friday.

The city historian could be seen most days walking through the cobbled streets, past the fruit hawkers and musicians, passing under balconies strung with drying sheets. He would stop to talk to residents who knew him by sight, despite his understated manner and the grey guayabera shirt of the Cuban bureaucrat he favoured.

Leal had a reputation for sorting out people’s problems, however small. Last week however, Cuba’s president, Miguel Díaz-Canel, called him “the Cuban who saved Havana”.

Leal was born in 1942 and, although poor, he educated himself as a historian. He was fascinated by the city around him. One of his earliest acts was to save a street cobbled in wood outside the old governor general’s palace from being permanently covered in asphalt.

According to the city’s mythology, it had been originally laid in wood to muffle the wheels of passing carriages so that the governor general could enjoy his siesta. It is one curious detail in a city that contains masterpieces from almost every period in the last half millennium, be it baroque, art deco, art nouveau or Soviet realist.

Never a priority in the 20th century, old Havana fell into disrepair. By befriending Fidel Castro, Leal began the process of bringing it back. He managed to get the old town designated a Unesco world heritage site, and then gather enough money from Europe to start putting the buildings back together.

In the 1990s, Leal convinced Castro of the benefits of setting up a for-profit company that would invest tourist dollars back into the restoration. He started with the Hotel Ambos Mundos, where Hemingway wrote, and then his teams spread out. 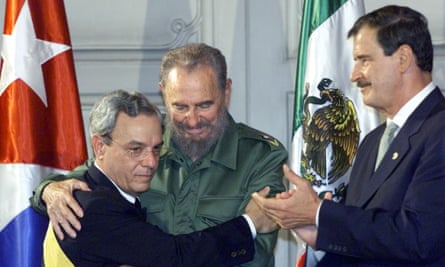 Now, the old town, hard by the great bay which made Havana so important during Spain’s plundering of the Americas, is a maze of exquisite buildings whose narrow streets give way to perfect squares containing, say, the baroque cathedral. It was particularly dear to Leal’s heart as a committed Catholic. And everywhere local life continues.

Leal insisted that old Havana not become a sterile version of the past, populated only by tourists. His willingness to convert colonial buildings into maternity hospitals and schools, as well as hotels and restaurants – while solving people’s problems on his way to work – made him so popular that after Fidel died, he was tipped for high office. Instead, as he slowly succumbed to cancer, his teams finally finished rebuilding the Capitolio, a vast edifice that resembles the US Capitol and which is slated to be the future seat of Cuba’s National Assembly. Its gold dome now shines over the city he rebuilt. Yesterday residents across the city were hanging white sheets from their balconies in tribute.