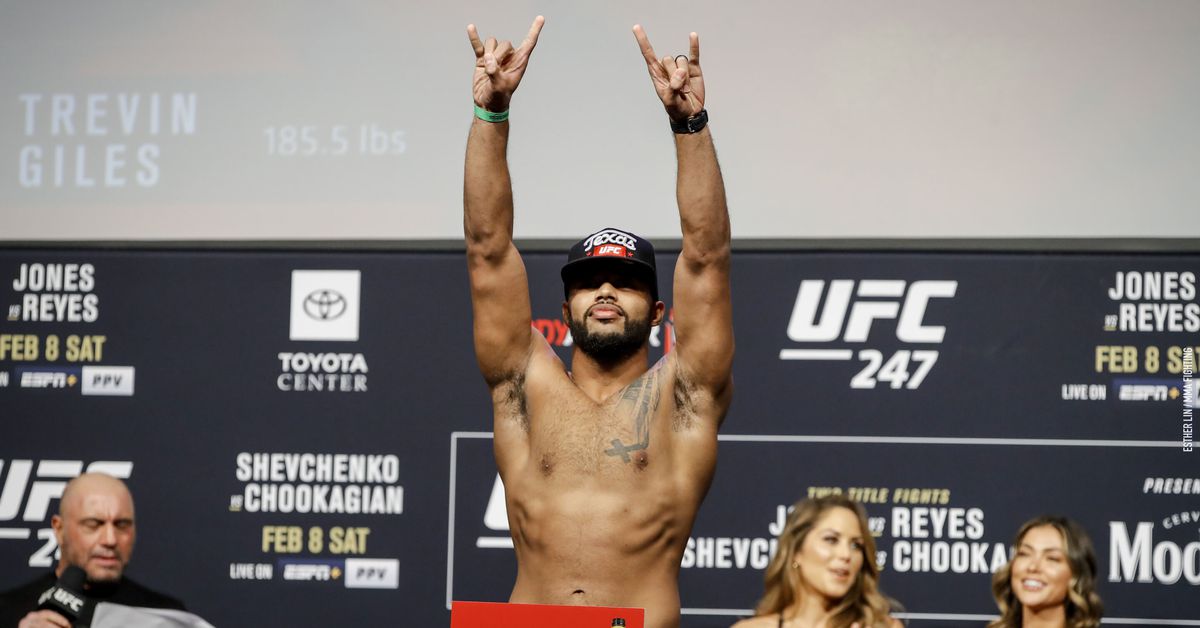 Trevin Giles and Kevin Holland will collide at UFC APEX to open the UFC Vegas 5 main card, but that’s where the animosity ends on on Giles’ side.

While there are a few hooks to the middleweight matchup, such as Giles and Holland both hailing from Texas and the fact that they share the same manager, Giles insists that a missed training session between the two isn’t one of them. Asked about Holland mentioning a supposed “brush off” in the past, Giles clarified that it was a simple miscommunication, and he doesn’t expect there to be added tension because of it.

“I didn’t brush him off,” Giles said at UFC Vegas 5 media day. “I know what he’s talking about, though. I actually think – I could be remembering wrong – but I believe he had a fight coming up, and he was trying to get some sparring, and I think he hit me up on Facebook. He ended up sending a message and asking to train, and I agreed with it. I was like, ‘Yeah, okay, cool,’ and then we picked a day or whatever. We got closer to the day, and something happened, I don’t know if it was work-related or what, but I just let him know that I wasn’t able to do it. And it was kind of left at that, I didn’t think anything of it. I kind of expected him to hit me up again and when can we get the rounds in or whatever, but it kind of got left at that.

“That’s how my memory works as far as how that went. There was definitely no brushing off, I’m not even like that, I don’t brush people off or anything like that. I’d like to train with him, he seems like he’d be a good body too. It wasn’t that, maybe it seemed that way to him, but if it did that wasn’t my intention.”

For a second straight fight, Giles is facing a replacement opponent as Holland is stepping in on just nine days’ notice for Jun Yong Park (reason for withdrawal is undisclosed). It’s not quite as outlandish as his most recent outing in February, which saw veteran James Krause step in on just one days’ notice to save Giles’ spot on the UFC 247 card.

If anything, it’s surprising that Giles and Holland didn’t run into each other sooner given their Texas connection. Giles, who fights out of Houston, smiled at the idea of this being some sort of interstate rivalry, but inevitably shot down that angle as well.

“I think it’s a coincidence,” Giles said. “I think that people—it’s something that’s interesting to throw into the mix just because we’re both from Texas, you can say, ‘This is a battle between cities’ or something like that. I don’t see it that way, he probably doesn’t see it that way either. I think it’s exciting that me and him are from Texas and we get to go in there and throw down. But no, it’s not a battle between cities or nothing like that.”

One explanation for why Giles may have a different perspective on building up a fight is that in his other line of work as a Houston police officer, he’s used to conflicts with real life stakes. He said his duties have haven’t become that much more difficult during the COVID-19 crisis, but he did think twice about resuming his fighting career given the uncertainty surrounding the world of sports and entertainment.

“There was a part of me that didn’t want to fight just because I have a family to think about,” Giles said. “I don’t want to come back home and bring anything home. But since I’m kind of already in that predicament all the time at work, it’s my job to respond to people that are having issues whether you have COVID or not, and sometimes we’re just not gonna know. If something’s going on or somebody’s doing something, I gotta arrest somebody or grab somebody or something, we don’t know if they have COVID or what, you’ve gotta kind of figure that out later. We just protect ourselves the best as we can.

“Like I said, I’m kind of already in that predicament every day at work. It’s probably a lot safer right now. I’m probably at less of a risk to catch COVID then I would be at work.”