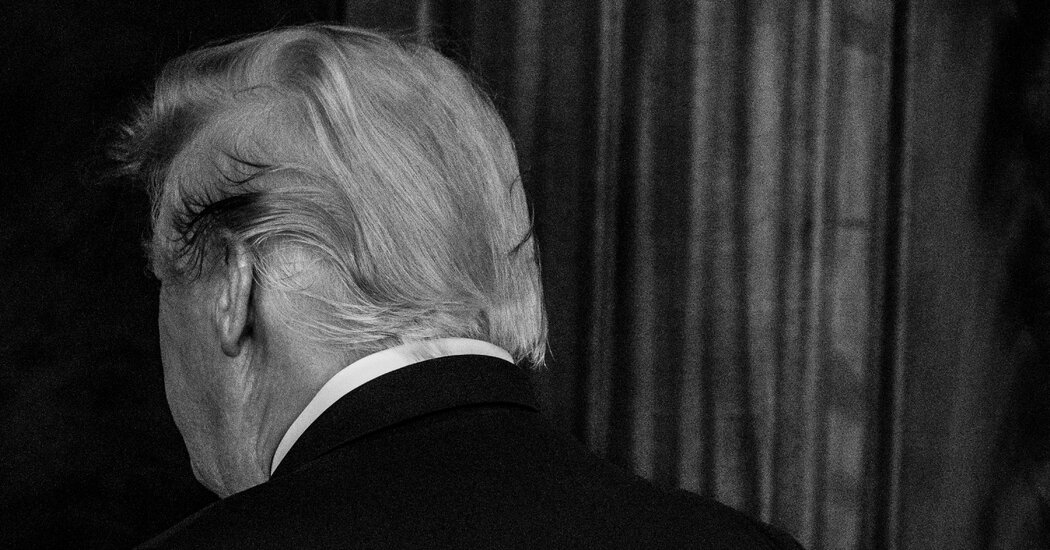 It was clear when President Trump woke up on Thursday morning, with no pollster left to lie to him, and not enough Fox News sycophancy to fill his cereal bowl, that he would have to play one of the last tricks in the dictator’s handbook.

He floated the idea of breaching the Constitution by illegally delaying the national election. It follows his logic on a pandemic that has taken more than 150,000 American lives. If there were less testing for the coronavirus, cases would go down. Ergo, if there were no election on Nov. 3, he couldn’t be booted from office in a wipeout. The stable genius strikes again!

Here’s a better suggestion: As a mortal threat to those looking for life-and-death guidance from the White House, he should do humanity a favor and surrender now. He can quit while he’s only behind by 10 points or so. More important, by walking away today, he can save many lives of supporters who have listened to the lethal quackery from the presidential podium.

He gave up in the war on Covid-19 from Day 1, when he declared that there was nothing to worry about, it would all soon disappear like magic. And his throw-in-the-towel tactics continue to this day, as he promotes the harmful and bizarre suggestions of a woman who also believes in demon sperm transmitted through dreams.

And here’s the net result of a country run by a crackpot: On a single day this week, there were nearly twice as many Covid-19 deaths in just one American state, Texas, than in the five major countries of Western Europe combined. On that same day, Thursday, the Covid Tracking Project reported 1,400 American deaths, the most in a single day since May 15.

Trump publicly quit on his country two years ago, when he chose Vladimir Putin’s word over that of American intelligence officials, the infamous sellout in Helsinki. So it was no surprise when the two leaders spoke by phone this week, that Trump did not even raise the question of Russians paying a bounty to have American soldiers killed in Afghanistan. That is dereliction of duty, son.

He quit on the economy in early spring, when he pushed for a widespread reopening, even though health experts warned that the results could be catastrophic. And thus, this week we saw the largest drop in economic output on record, as people were afraid to resume normal commerce in a country fevered with viral hotspots.

Trump has yet to realize what every sensible business owner knows: The only path back to prosperity is through the managed economic sacrifice and uniform health guidelines needed to get the virus under control.

He quit on the Constitution, obstructing Congress and abusing power, in the scheme to tie aid to a struggling ally to a demand that Ukraine dig up dirt on a political opponent.

From there, he’s become increasingly authoritarian. Clearing a park full of peaceful protesters by force in order to stage a photo op with a Bible was just the start.

Of late, Trump has been itching for a riot. With buildings aflame, windows smashed and mobs in the streets, he could fulfill his prophecy of being the only man able to fix the American carnage he warned us about. Majorities support changes needed to root out systemic racism. The only way that Trump can hold back the tide is to change the story.

Except, some of the players are not who we think they are. The police have identified the man who turned largely peaceful Black Lives Matter protests into mayhem in Minneapolis — the window-smashing Umbrella Man — as a white supremacist.

Sending Trump’s troops into American cities appears to have backfired, even as the president announced plans to possibly send new federal agents into Cleveland, Milwaukee and Detroit, counting on swing state showdowns for the Fox News machine.

If Trump were to quit, he would join Richard Nixon in disgrace — he’d be an impeached president (Nixon quit on the brink of impeachment) forced from office. Except, Nixon is a notch higher in the hell-scape, given his diplomatic openings in China and his signing of landmark environmental laws.

Delaying the Nov. 3 election is not only illegal, it would be unprecedented. Lincoln held the regular election during the Civil War, and Franklin Roosevelt faced voters on time during World War II.

If Trump were to walk away today, the likely nominee of his party would be Mike Pence. And Democrats shouldn’t be afraid of facing Pence. He’s Trump with a pious veneer, the man sent to the border to justify putting kids in cages, the Stepford veep always there with a timely bootlick. And of course, he carries a portfolio of failure as the man chosen to oversee the federal government’s disastrous response to the pandemic.

Quitting before an election would deprive Americans of the satisfaction of rejecting him by an overwhelming margin, a national shower to clean off four years of his grime and grift.

But there’s another image, equally satisfying. Trump could play one last gambit in the dictator’s checklist and refuse to leave office on Jan. 20 — election or no election — as required by the Constitution. If he does this, a weary nation would be rewarded with a presidential perp walk, as Trump is escorted out of the White House and into infamy by military police.

Timothy Egan (@nytegan) is a contributing opinion writer who covers the environment, the American West and politics. He is a winner of the National Book Award and author, most recently, of “A Pilgrimage to Eternity.”