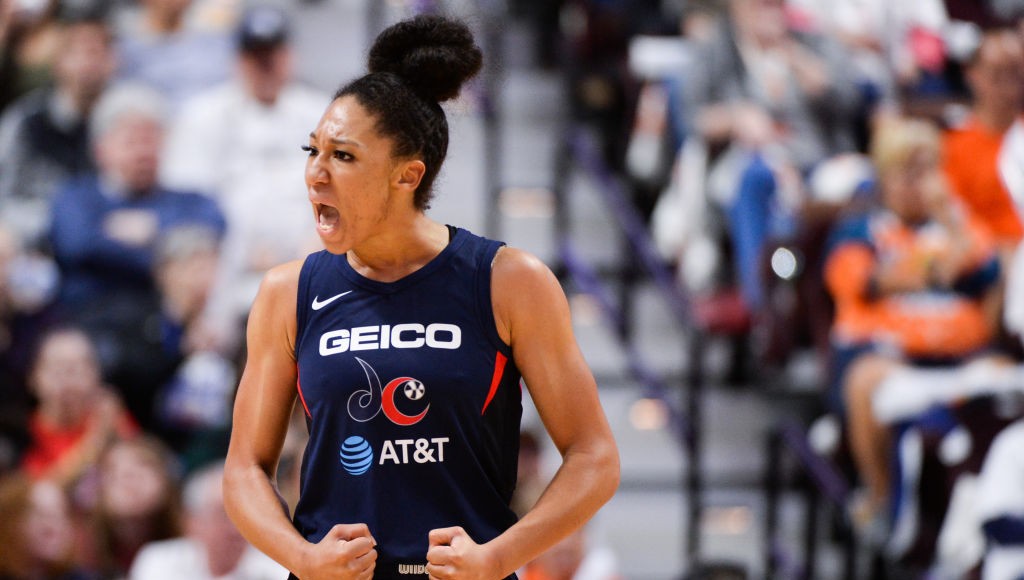 The reigning WNBA champion Washington Mystics absolutely dominated the Seattle Storm on Thursday to jump out to a 3-0 start to their season in the WNBA bubble at IMG Academy in Bradenton, Florida. That’s the boring and most simple way you could describe what happened because in reality, it was a demolition that was honestly stunning. This is a Storm team that, while missing head coach Dan Hughes due to him being a high health risk, has the majority of its core roster still from the 2018 championship team. Breanna Stewart is back from injury, Jewell Lloyd and Alysha Clark are there, and Sue Bird is back for another go. This team is stacked and entered the Wubble as the title favorite.

And the Mystics crushed them from the word go in an 89-71 victory, despite being without the reigning MVP in Elena Delle Donne, two other starters in Natasha Cloud and LaToya Sanders, and their biggest offseason addition, Tina Charles. This is a team playing the literal version of the next woman up mentality and they crushed the Storm with ease. If this is surprising to you, do not feel bad, because just about everyone projected at least some form of step back from Washington, which begs the question: How exactly are the Mystics doing this?

It has been three total games so we should take all of this with a grain of salt and acknowledge that there’s a long way to go, but given it’s a shortened 22-game season, we are 14 percent of the way through the regular season and Washington has two wins over expected contenders in Phoenix and Seattle.

When watching the Mystics, something that stands out is how the general aspects of their system have remained largely unchanged. You would think that a team missing the majority of their key starters would change the system up to fit the massive changes, but instead they have opted to keep the status quo and just shift roles and workload over to different players on the roster. The result is players looking comfortable playing within a familiar system, even as they take on expanded roles. They already know where they need to be and what they would be doing at any given moment. They’re still firing away from three-point range and seeking out ways to create shots there as much as they can. They led the WNBA in attempts from deep last season and they’ve spent the bubble shooting 25+ times in two of their three games. The only time they didn’t shoot 20, was 17 against the Fever, and they dropped 100 points on them so obviously the deep ball wasn’t really necessary.

This is a high powered offense that knows how to function even without its stars thanks to a system that works. They seek out the deep ball and they shoot it with great accuracy. The sheer volume of shots from deep gives them an edge, but of course, that shot wouldn’t have much weight behind it if the defense wasn’t there to back it up. Defending three-point shooting can at times feel sporadic and random, but the Mystics close out on teams. They force them into bad shots. They have yet to give up 90 points in a game while themselves scoring no less than 89. That 89 came against the Storm after they had already wrapped up the game and rested throughout the fourth. They’re playing incredible defense while at the same time scoring in bunches. This is what elite teams do and the Mystics look elite even without their traditional stars.

Elevating players to expanded roles only works if those players take advantage of that opportunity and no one has done that better than Myisha Hines-Allen. Before this season, Hines-Allen’s career high in points per game was 3.8 which she earned in 10.5 minutes per game of play in her rookie season. Her sophomore year she fell to 7.8 minutes and only scored 2.3 points per game. She wasn’t exactly looked towards as a top offensive option for the Mystics, but through three games now she has scored 27, 17, and 16 and is one of the top three leading scorers on the team.

The two other players that have been taking on starring roles are Ariel Atkins and Aerial Powers. Atkins started every game in 2019, while Powers was a fairly important piece off the bench, so both seemed like strong candidates to take on a heavier load with so many key pieces not in the bubble. They, too, have thrived, shooting a crazy percentage from three-point range and helping propel this offense from the perimeter, but Hines-Allen has truly been a surprise force that has not only taken on a heavy volume of the offense but has thrived in it.

Hines-Allen stepping up out of nowhere is a great example of what the Mystics have managed to do so far. They’ve taken a season that had the potential to be lost due to external forces and have refused to back down from their quest to defend their title. While you shouldn’t feel bad if you doubted the Mystics entering the season, if you continue to doubt them from this point on then you are merely fooling yourself.