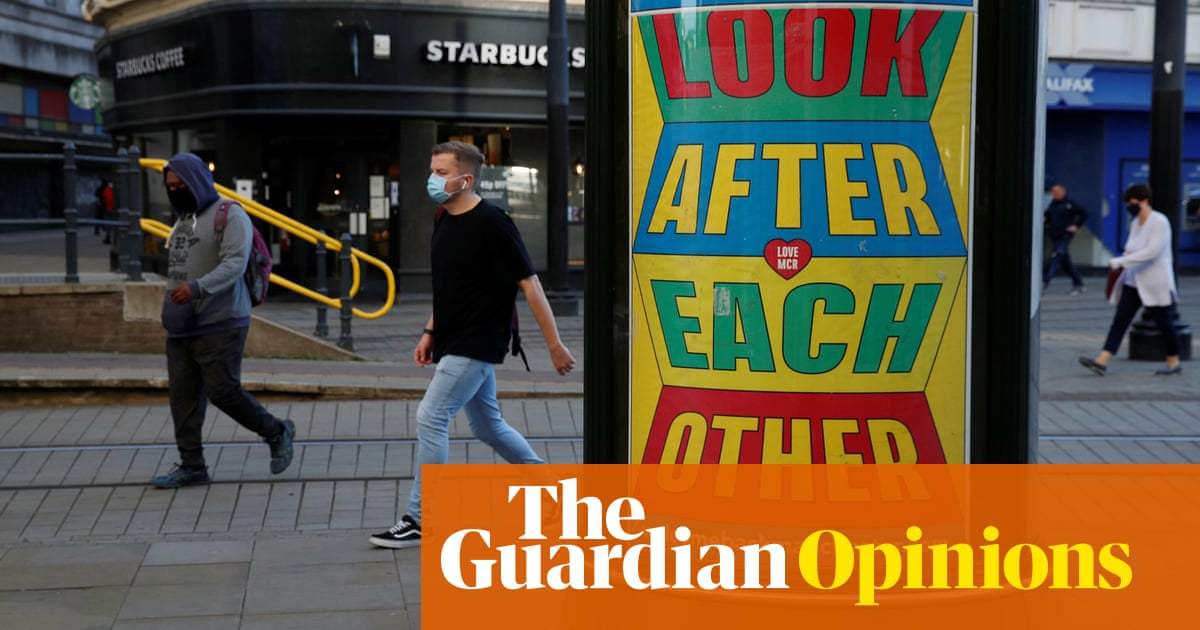 More than 4 million people in the north of England woke up on Friday morning to the news that coronavirus restrictions were being reimposed. This follows the local lockdown in Leicester. Such measures are entirely predictable and a glimpse of the pattern of lockdown and release that will occur over the coming weeks and months as the government attempts to avoid a second peak in infections.

While it might be an effective way to stop the spread of the infection once it has got out of hand, the government’s whack-a-mole approach will slowly strangle the economy, as small businesses collapse under the uncertainty and larger ones have to let people go. It will also undermine social cohesion, as increasing numbers of people refuse to abide by what they see as capricious, complicated rulings.

To fix this, the government needs to look six to eight months ahead and make a clear plan for how to best get through this crisis with the least loss of life, the healthiest possible economy and the least overwhelmed health service. It’s crucial to do this thinking before the winter hits. In short, lockdowns should be a last-resort measure when the frontline outbreak responders – the local testing and tracing teams – can no longer suppress the infection sufficiently.

There are tough decisions ahead. In the absence of a vaccine, people must realise that they cannot have it all. We can either have our daily lives back with borders largely closed, or we can have free movement and constant outbreaks. It’s important when weighing this up to realise that the biggest problem for the economy is not lockdown. It is the virus itself. Front-loading deaths from this disease does not “save” the economy, as Sweden has painfully learned, and buying time can lead to treatments such as dexamethasone, which would have saved the lives of many of those who died. “Herd immunity” has thankfully also been taken off the table, given uncertainty about levels of protection, long-term health complications for survivors and the prolonged strain on health services.

Thursday’s figures revealed 846 new infections in the UK, the highest total for more than a month. But a closer look at that picture gives us a clue as to what direction to take. Only 34 of those infections came from Northern Ireland, Wales and Scotland – the rest came from England. Since Scotland started pursuing an “elimination” strategy, infections declined and are now estimated to be seven to 10 times fewer per capita than in England. Current modelling estimates 10 to 30 daily new infections in Scotland versus 2,800 new infections per day in England. Scotland has reported no confirmed Covid-19 deaths for 14 days, and Northern Ireland for 16 days.

Scotland and Northern Ireland are pursuing a “zero Covid” objective, aiming to eliminate community transmission. But they won’t be able do it without a coordinated approach across the UK. Cooperation is essential – if only one part doesn’t go for elimination, the others can’t do it either. We all win together, or we all lose together.

Going for a zero Covid-19 Britain means setting an objective with a timeline, forming a gameplan, appointing a high-level official to oversee things and just getting on and doing it using local authorities and expertise. The key is to use physical distancing measures to drive case numbers down and then use a robust testing and tracing system to figure out who has the virus and then get them into isolation during the infectious phase so they don’t pass it on to others.

This is classic outbreak control and it is how viruses have been controlled in the past. It requires a focus on clearing the virus completely from those parts of the country that have only a few cases (south-west England, Wales, Northern Ireland and Scotland), emulating the Australian and Chinese approaches by limiting non-essential travel in and out of these areas, and then engaging in a concerted effort to get the Midlands and north-west under control. It also requires strict measures at borders including testing at arrival and five days later, enforced quarantine and tracking of all imported cases.

In this way, those places with very few cases could effectively return to normal life.

I have studied outbreaks in poorer countries such as Haiti, Senegal, India and Tanzania, so I am conscious what a privileged position we are in Britain, with our enormous wealth and resources. Why not make the choice to make the UK a beacon of suppression, a success in the fight against Covid-19, a model for others? The government owes it to the people of Greater Manchester and beyond to find a better way.