Professional sport was plunged back into a now-familiar sense of uncertainty on Friday after the government’s decision to suspend spectator test events threw careful and expensive plans into disarray.

The completion of the Premier League season and a successful Test series between England and West Indies had raised hopes that sport was ready to move on from behind-closed-doors events and welcome back supporters. After plans to allow limited attendance by spectators to Glorious Goodwood and the World Snooker Championship were cancelled at an hour’s notice, however, that proposition is now in doubt.

The news was relayed by Boris Johnson in a televised address. Shortly after the FA announced it was pausing plans to allow fans into Wembley for the Community Shield at the end of August, one of the more prestigious events to have been earmarked as a pilot. The St Leger Festival at Doncaster is another, with promoters saying they remain hopeful punters will be able to attend in September. If they cannot, however, the last chance of the Flat racing season recouping some of its lost money will be gone.

The pause on pilots, which has also affected plans to allow spectators into two county cricket matches this weekend, will be in place for a fortnight until 15 August. What happens after that, however, is unclear. The metrics by which the government would decide it was safe to resume are unknown even within the Department for Digital, Culture, Media and Sport.

Commenting on the prime minister’s announcement, the culture secretary, Oliver Dowden, could only tweet his condolences. “Very disappointing news that with the rise in infection rates we cannot press ahead with sports pilots with fans this weekend,” he wrote. “I know the huge efforts cricket, snooker & horse racing have made to welcome fans back. We’ll keep working together on their safe return asap.”

For football the need to get supporters back into stadiums is pressing, but it is not yet immediate. The FA will hope that a government all-clear on 15 August would give them enough time to prepare for making Wembley a home for socially-distant spectating. 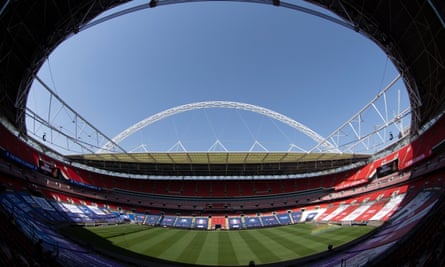 The FA had been intending to allow fans into Wembley for the Community Shield at the end of August, but has had to pause such plans. Photograph: Eddie Keogh for The FA/Shutterstock

“The FA have offered to use the Community Shield at Wembley as a test event and are waiting to see if this is possible according to government guidelines,” an FA spokesperson said. “We, along with the rest of football, want fans to return to stadiums and grounds as soon as it is safe to do so.”

The Premier League and EFL hope to have fans back at league matches by October, a target confirmed earlier this week by the sports minister, Nigel Huddleston. A two-week pause in pilot events is not expected to impact on that timing as the Premier League had not anticipated staging trial events until pre-season, with many of those games likely to take place in September.

The biggest challenge for football would not be test events but giving individual clubs enough time to prepare their stadiums once the all-clear is given. This is especially complicated for EFL clubs who not only have fewer resources with which to make the adaptations, but are in greater need of revenue from the turnstiles to survive.

In racing, the cancellation of the pilot event at Glorious Goodwood was calculated to have cost organisers £100,000 in preparation time. The Yorkshire Ebor festival, which is to take place between 19 and 22 August and had been earmarked as a pilot event subsequently announced that it too would be going behind closed doors. “Whilst this is clearly a disappointing decision for racing supporters and many in our home city; it is right that the public health is kept as a priority,” organisers said.

With regards to the St Leger, the managing director of Arena Racing Company, Mark Spincer, said: “We will not rule out running some level of pilot event there if it is deemed appropriate to do so.”

The prospects for racing, particularly independently owned courses, will be severely impacted if the last flagship event of the year cannot let people in. The absence of supporters will also hit World Snooker hard.

It was planning to operate at one-third capacity at the Crucible in Sheffield to allow for social distancing, and was hoping to make around £700,000 in ticket sales. Some fans were allowed in to Friday’s opening day – 125 out of a 900 capacity – but other tickets have now been cancelled.

“We realise this will be a huge disappointment for fans who were excited to witness the magic of the Crucible over the next fortnight, and we feel the same ourselves,” said the World Snooker chairman, Barry Hearn. “Above all it’s a great shame for people who had those golden tickets, but in the circumstances we are now living in we have to accept the decision and move on.”

Meanwhile a RFL spokesman confirmed that both Super League games would take place this Sunday, despite the lockdown being tightened in Huddersfield, whose team will travel to Headingley to play Leeds Rhinos. Rugby league is also still hoping to get the go-ahead from the DCMS to have some involvement in the staging of pilot events in September even though the government has stalled the process for at least a fortnight.

“Clubs are not budgeting for having crowds back before October, so anything before then would be a bonus,” a spokesman said. “The RFL has been working with the DCMS on behalf of Super League clubs for some time to make clear that we would be keen to be involved in staging pilot matches with crowds in September.

“The continued support of Sky Sports, and the loan secured from government, has been a considerable help in our clubs coming through such challenging times. But the restructure of the season has been built around the hope that crowds will be allowed back to sporting events from October, with some big games held back until late in the rescheduled season in the weeks before the play-offs in November.”