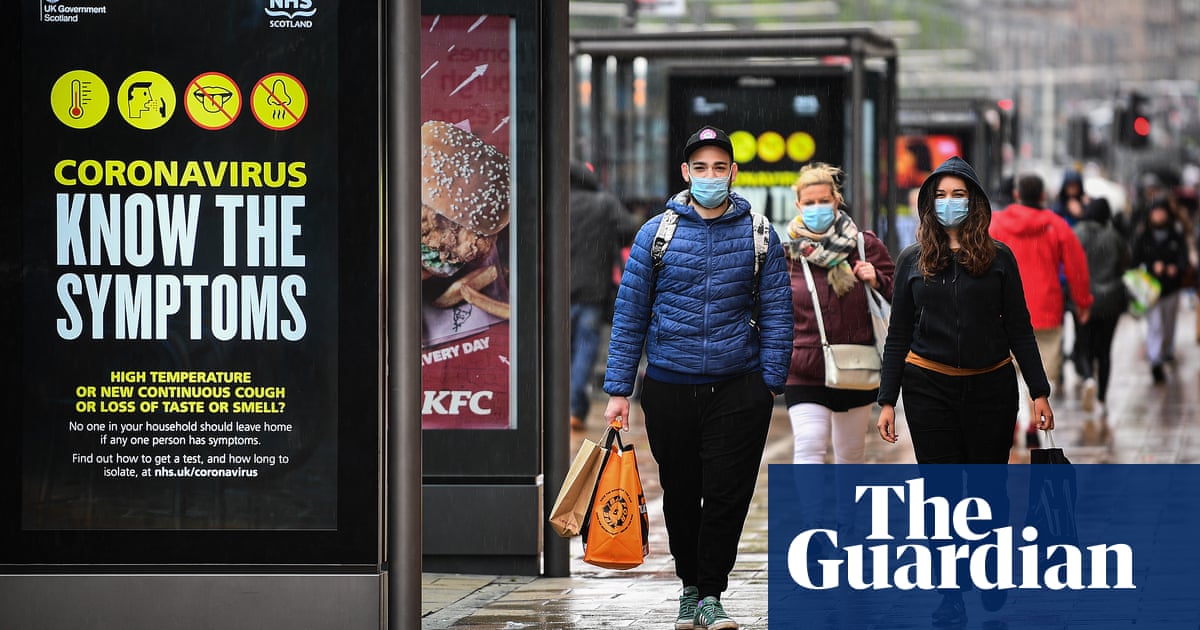 While adherence to mask-wearing rules was estimated to be as low as 30% in some areas of the UK, other areas have had near-complete compliance, according to the Guardian’s latest snapshot survey.

Shopkeepers reported that adherence was particularly low among young people, mirroring comments by the WHO chief, Tedros Adhanom Ghebreyesus, who said on Thursday that some spikes in the virus around the world were driven by the young.

At Camden’s Buck Street Market in north London, despite clear signs at the entrance to the market – which is partially covered and includes a network of small, artisan shops and stalls – some store-holders estimated that mask-wearing was as low as 30%.

Laura Zsikai of Koko Art, which sells hand-painted shoes, said she was surprised by just how low adherence to mask-wearing was.

She was wearing a mask and said she hoped that seeing this would encourage more of her customers to use face coverings. “I thought the change in the law would mean a lot more people would be wearing masks,” she said. “But that hasn’t happened.”

At the nearby London Works store selling clothes, sunglasses and other items, staff member Kaya Ivic estimated that a similar proportion of customers were wearing masks.

“Many customers do have masks but they often don’t put them on before walking into the shop,” she said. She was standing behind a screen and was not wearing a mask but said she put one on if she was close to a customer.

At nearby Superdrug, many staff were not wearing masks and nor were about 20% of the customers. No efforts were made by staff to enforce mask-wearing.

One maskless member of staff said: “The important thing is that we help each other. If everyone wears a mask you can’t see me and I can’t see you.”

On Princes Street in Edinburgh, Anita and Layla, both 14, were also maskless. They were unanimous as they left the Primark superstore with their faces uncovered that there was no reason to worry “since no-one stopped you”. Anita said she normally wore them but “when I don’t, I don’t stress about it because I’m not going to get told off”.

Both girls knew the face coverings rule could be enforced by the police, but said police were never seen intervening. And if everyone else was wearing facemasks, Anita said, what did it matter if a few didn’t? “If you don’t wear it, they’re not going to stop you,” she said.

However, among the thin crowds of shoppers on Princes Street, they were in a tiny minority. Many shops enforced the rules with greater vigour than Primark, and the vast majority of shoppers donned face coverings as they walked in off the pavement.

In the north-London suburb of Muswell Hill, from Poundland to Planet Organic, compliance with mask-wearing was more than 90%.

The same situation was found in parts of Manchester, where a second lockdown has just been announced due to a rise in Covid-19 infections.

In the outlying Greater Manchester suburbs of Hazel Grove, Bredbury and Marple there was blanket compliance with the mask-wearing guidelines.

Victoria Barlow, who had just visited two local supermarkets, said mask-wearing was vital to protect the more vulnerable in communities. “It is for the good of everyone and here at least the message has got across because in the main people are wearing masks whenever they go into shops,” she said.

The 32-year-old from Compstall added: “We need to avoid another spike and wearing a mask keeps people safe. Equally, if someone isn’t wearing a mask, there is usually a good reason, like a hidden disability, and this is not the time for public shaming.”

“Mask judgmentalism” is one of the side effects of the new rules, according to some who spoke to the Guardian. Those wearing masks sometimes look critically at those whose faces are uncovered.

Karen Bennett, 49, shopping in Princes street, Edinburgh, said she felt compelled to wear a visor even though she is exempt for health reasons, because the social stigma of shopping uncovered was too great. “You get all the looks and stares,” she said as she left clothing store Zara.

One young maskless woman in Camden said she believed it was her human right not to wear a mask.

“I’ve seen a lot of animosity for people like me who aren’t wearing masks,” she said. “But as long as we respect each other’s space I think it is OK not to wear a mask. I have a strong belief in God and I believe that the virus won’t touch me or if it does I won’t be badly affected.”