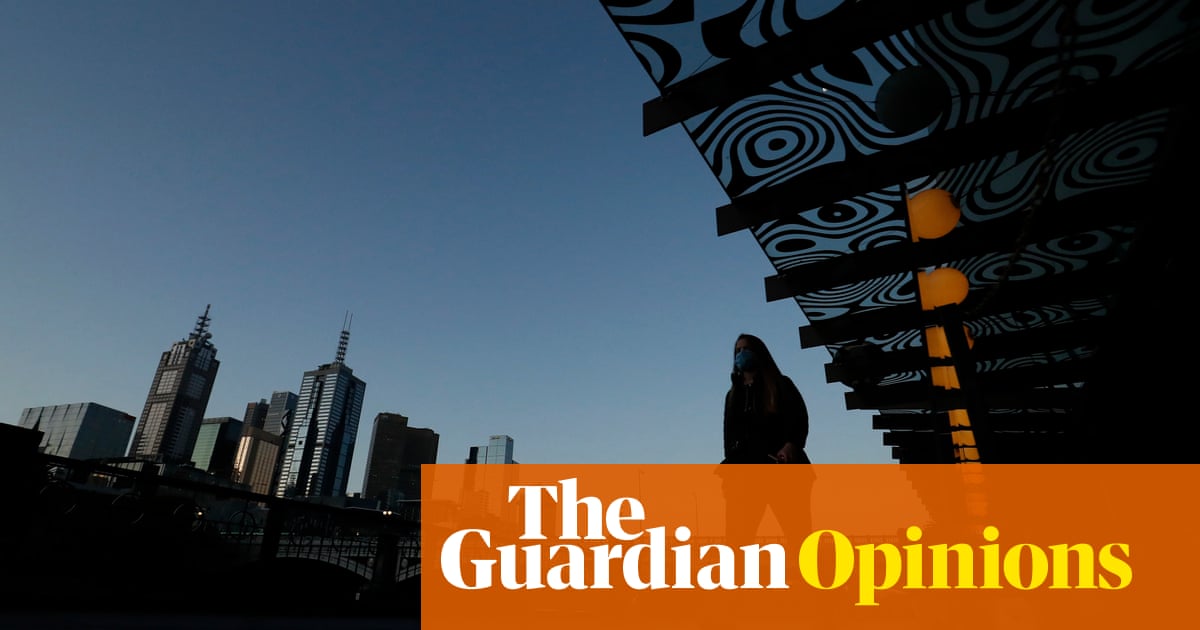 The morale-boosting markers that were shared across Melbourne during the first lockdown have all but disappeared. Rainbows have peeled off fences, forgotten teddy bears are wedged between Venetian blinds and most of the chalk messages have long washed away.

“This isn’t like the first wave,” our chief health officer, Brett Sutton, said on the Saturday. By the Monday, with the daily presser citing our then record highest number of Covid cases at 532, and cement grey cloud obscuring the sun, Melbourne felt done in. Come Thursday, under a blue sky, with blossoms out and wattle blazing, Victoria clocked 723 – a number that winded the city. And now the fear is back.

Maybe it’ll go down. It’s not a surprise, they say. But maybe this is what it feels like as Covid closes in. Because Sutton is right, nothing about this experience is like the first wave.

First the hotspot suburbs were named and, though we took the piss out of it, we secretly bought the idea that this thing could be contained within postcodes. Then the towers were locked down and there was no more talk of “being in this together”. In just weeks, the structural inequality in our workforce, our housing, our aged care, was laid bare. Still, the concept of contact tracing was comforting. Each individual report of a school being closed for “deep cleaning” maintained the veneer of control. Suddenly, somehow, more than 80 are closed.

And now we’re hearing the stories behind the rising death toll. Right now, perhaps just for now, they’re our elderly people. A contractor employed to test residents in aged care homes tells talkback of witnessing a woman’s grief moments after losing her husband of 56 years. Of course, he died alone. “And he suffered,” his wife said to the woman. “Oh how he suffered.”

These stories make sourdough seem a little stupid. We smashed the first curve by staying home and baking bread. Or that’s what we told ourselves.

The playgrounds have been retaped up. In many places, it’s the same stuff as last time, weathered and hastily tacked up. It’s half-arsed, much the way most of everything feels right now. The skaters are less easily deterred – the city of Bayside spent Monday filling skate bowls with gravel.

The Melbourne central business district is silent. Even most of the visibly homeless have vanished. For now we care enough to house them. That commitment was due to run out at the end of this month, it’s been extended to April of next year.

In the staggering dislocation of 2020, I think of the many gifts my parents gave me | Christos Tsiolkas

The constant scream of angle grinders signals the one glaring exception to all the inactivity. Coronavirus has collided with a city in the middle of a massive construction boom. “Victoria’s Big Build” entails $70bn of transport projects and 119 road and rail projects. Now, a city in stage three lockdown is crawling with workers decked out in high vis. And it’s not just the government projects: the high rises continue to go up, preparing to accommodate a rising population that possibly, maybe, just might not pan out.

Back in the first wave, only a few people could boast about having had a cotton swab shoved so high up their nose it stung for days. But by now, one in five Victorians have been tested. We’ve spent hours waiting in our crappy local shopping centre car park, or out the back of our GP practice, or in a tent in the local park. The queues look like voting day, without the sausage sizzle and the banter.

And now the masks. They are, of course, being Melbourne, magnificent. Local fashion labels produced quick runs from fabric remnants, not-for-profit social enterprises can’t keep up with the demand, ingenious and exhausted restaurants offer batches with a box of take-home meals. It’s another way to feel good about this city. But if we’re all honest, the masks suck. We can’t smile at each other, we can’t hear each other, our glasses fog up. We’re learning to scrunch up our eyes to denote goodwill. Some of us yell HELLO as we pass by. The bottle shop owner makes signs to hold up, “Your dog is awesome/I really genuinely like this product/Sarcasm.”

There are no empty spaces. Given that we’re not allowed to breach what police have dubbed the “ring of steel” that surrounds outer Melbourne, or venture across town, everyone is vying for a patch of their own remoteness. We all funnel along the designated walking paths of our local parks, the bay, the creeks, the Yarra, any blessed body of water. But there are too many of us. We negotiate who should cross a bridge first. Little pods of people walk together as if travelling in invisible shuttles, barely acknowledging each other. Only dogs breach the boundaries. A man pats ours affectionately and then apologises: “I just realised you might not want me to do that.”

Unlike the first wave, we’ve stopped talking about our unsung heroes. Medical staff have been at this for so long now they have sores from the constant rub of their PPE. Sometimes they’re abused by their patients’ strung-out families. Teachers, who no longer work from home, but instead teach class in person to those few kids at school alongside their online students, aren’t getting sent chocolates any more.

Even the roads aren’t like the first wave. This time there’s peak-hour traffic. The cars persist, despite the risk of an on-the-spot fine of up to a very specific $1,652. Perhaps it’s the lure of going out into the world unmasked. Or just driving … anywhere.

We huddle over our phones, more so than ever. Our feeds aren’t like the first wave either. It is so deeply disorientating to not just be envious of the cafes and beaches and public pools and gyms and grandparents of those living interstate, but also those who live an hour away. And to know that we are officially banned from these places, these scenarios. We know we’re the cautionary tale that the rest of the country is scaring themselves with in order to keep 1.5 metres apart.

By Monday the masks directive will have made its way across the state. At least we’re not alone now but, really, we wouldn’t wish this on anyone.

A few of us have now attended our first online funeral. Some of us while simultaneously home schooling. A friend visits her grandmother in aged care behind glass. Her nan can’t work the headphones. My friend cries. The nurse cries.

One thing persists from the first wave: we fight hard to maintain perspective by constantly measuring ourselves against a sliding scale of misfortune. Nearly every complaint is bookended with the mantra “… but we can’t complain”.

We shrug off our grief by reminding ourselves of how much worse other people have it. The internet, of course, means we’re perpetually aware of the state of everyone else. From friends to faceless case studies in the news. They’re the people who simply don’t have time to indulge in refreshing their feed: they’re battling unemployment, mental illness, on the brink of losing homes, losing loved ones. This time, they’re among us, their numbers are growing, and some of us will join them. Some of us already have. This is the toll of this lockdown, and it’s fear of this, not the virus, fear of this thing lasting longer than six weeks, that hangs over this city today. Because this isn’t like the first wave.