Definitely Ibiza. The beaches, weather, vibe and people are just so correct. People need to experience a hot country that has the energy that Ibiza has. It’s my favourite place in the world – I’ve spent holidays there raving, and it’s beautiful. I’d make it a 48-hour festival that doesn’t stop; I feel like people don’t really rave like that any more. Just imagine: 48 hours of it just being dirty and people catching a vibe, acts just one after the other. It would be crazy! 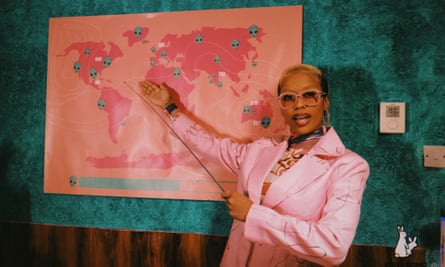 I’d have a tropical artist such as Black Coffee. You need someone from South Africa, the music and the energy there is just different. The sound from that country makes you feel warm, free and sensual. Black Coffee can bring that sound to a festival. I’d go for a DJ more than an artist to headline, to be honest, because every great live music experience I’ve had has been with DJs. I don’t know what it is about the connection that you have with the instrumentation of the music at DJ sets, it just hits different. I want to give DJs a space where they can shine.

I’d want it to be all females here. I haven’t actually seen any of these artists live, I’m picking them based off their vibes, the quality of their work, and how they carry themselves. I’d have Blond:ish, she’s super dope – if I’m doing something in Ibiza she’s got to be there, her DJ sets are just insane. I’d have to have Megan thee Stallion – she’s a bad bitch. I love everything she represents; I love how in her power she is. She’s unapologetic, she’s sassy and she shows it. I really rate it, and the vibe she creates. I know she’ll create the best mood, and I fuck with that heavy, she’s just a beautiful black woman.

Ace Tee is another artist I’d have perform. She’s hot! So sexy it’s mad. She is one of the hardest rappers I’ve ever heard. Her tone moves me a lot. She’s also a really sweet person, and I don’t think she’s been exposed to the opportunities that she deserves yet. I’d have her on at 1am, everyone would be lit!

Esperanza Spalding is just the crème de la crème. Jazz artists like her are necessary in every festival. It’s important to have a high moment in the festival, but it’s also important to mellow down. Rihanna has got to be there, performing her smash hits to remind everyone how much of a bad bitch she is. She’s a buff ting. I’d want her to do songs from around the Good Girl Gone Bad era. Or imagine hearing Rude Boy at a festival?

So, there’d have to be stuff surrounding wellness and healing, that’s needed at a festival. Maybe something like a crystal room or a room with trippy drawings. I’d make it spiritual. I would also divide the festival into different areas, with each area having a specific theme. I’d get actors to walk around and make the festival-goers believe in the theme going on around them. Like an immersive experience.

This is going to sound so biased, but I love my own food. I’m a really good cook. I make lit food but don’t have a specific cuisine. It goes from lamb chops, to chicken wings, to sea bass, to octopus, to pasta. I cook anything – but it’s all tasty food! Maybe I’ll be in charge of the catering at my festival? My boy Diego also makes the best jerk chicken and banana cake in Manchester, it’s crazy. He can cook for us too.