While many of us spent a lot of time doing very little during the coronavirus lockdown, for a niche pocket of society it provided an opportunity to push themselves to the limits of physical endurance.

While ultrarunners also had less to do, with no races to train for, lockdown became an ideal opportunity to complete goals they had long hankered after, resulting in a number of world records being broken in the past few weeks alone.

Sabrina Verjee became the first woman to run the Wainwrights round, a mere 318 miles (512km), while Kim Collinson broke the Lakes 24-hour challenge record that had stood for 23 years. Then came Beth Pascall, who smashed the previous Bob Graham record held by Jasmin Paris. Meanwhile, Damian Hall set a new record time on the 268-mile Pennine Way – while also cleaning the trail of litter – and earlier this week, Carla Molinaro set a new women’s world record by running from Land’s End to John O’ Groats in 12 days, 30 minutes and 14 seconds.

Molinaro and Hall say the pandemic and subsequent lockdown gave them the impetus to finally complete goals that had been on their bucket lists for years.

Molinaro, 36, a running coach, started out at Land’s End at 5am on 16 July. Running nearly 73 miles every day and fuelled by macaroni cheese, cakes, some cocktail sausages and a few pitstops at B&Bs, she didn’t even take a break to celebrate her 36th birthday.

“The weather was brutal towards the end – 30mph winds and driving rain,” she said. “And then I couldn’t run on the last day because I was in so much pain and we had to walk the last bit, but we somehow got through it,” she said, as she was being driven back home to Buckinghamshire by her sister, Andrea, after completing the challenge.

Despite getting blisters and having to have her toenails drilled, Molinaro, whose parents were marathon runners, took more than 10 hours off the previous record of 12 days, 11 hours and 6 minutes, set by the North Yorkshire runner Sharon Gayter last August.

Molinaro, who represented Great Britain at the 100km World Championships and whose previous challenges include running 170km around Mont Blanc, began training for the feat on the driveway of her family home in South Africa. 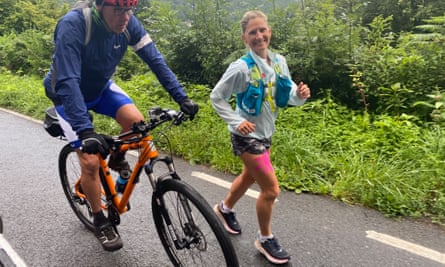 ‘This ended up being one of the hardest things I have ever done’ … Carla Molinaro Photograph: Andrea Molinaro

“Right at the beginning I was stuck in South Africa and we weren’t allowed to go out anywhere so I just started to do laps of the driveway – the neighbours thought I was mad,” said the former British Army operations officer.

“But all races were cancelled and the pressure of training for them had been suddenly taken away. It gave me that time to do those things which had been on my bucket list for a while, but this ended up being one of the hardest things I have ever done.”

Molinaro, whose inspiration included the endurance athlete Mimi Anderson, a previous record holder of the challenge, said it had been an “awesome” year for ultrarunners.

“Funny, really, that we clearly all had the same thought process. And then we all made it happen and went for the records at the same time. We smashed it and didn’t just give up and sit on the couch, which was obviously tempting.”

Hall agrees with Molinaro. The 44-year-old completed the Pennine Way in 61 hours 34 minutes, knocking more than three hours off the record set by his friend, the US ultrarunner John Kelly, just a week earlier. Before that, it had stood unbeaten for 31 years, belonging to Mike Hartley.

“This had been on the radar for me for about four years but I’d always been intimidated by how good the previous record was so I kept making excuses, but then lockdown happened and I ran out of excuses,” says Hall.

The father-of-two from Wiltshire completed the record run at 7.34pm on Friday in Edale, Derbyshire, having started at 6am on Wednesday in Kirk Yetholm, Scottish Borders. His route along Great Britain’s oldest national trail amassed more ascent than Mount Everest and included a section along Hadrian’s Wall.

The climate-change campaigner, whose whole attempt was certified as “carbon negative” by Our Carbon, used the challenge to help raise funds for Greenpeace UK. He and his 11 teams of pacers also cleaned the famous trail of litter as they ran, stuffing it in their packs before handing it to support team members at road crossing meet-up points.

“I feel tired and satisfied,” says Hall, who headed straight to the pub for his first pint in four months after completing the challenge. “Lockdown gave me the opportunity to start enjoying running for the sake of running again. I have flown around the world doing challenges and this made me realise sometimes we overlook what we have here.”