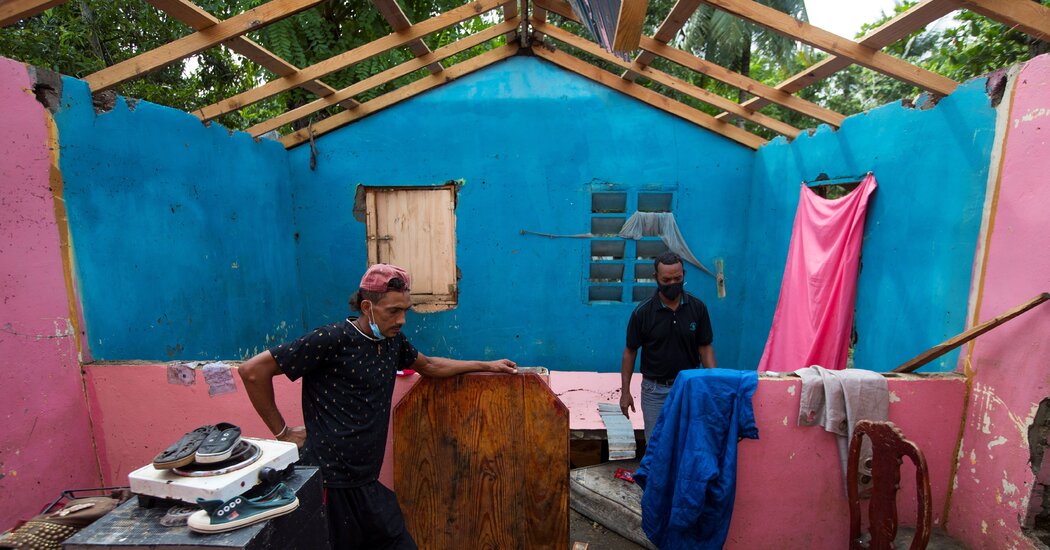 MIAMI — Hurricane Isaias raked the Bahamas, parts of Puerto Rico and the Dominican Republic on Friday, as it moved on a path toward Florida’s Atlantic coast.

The storm, already the ninth named storm system of the 2020 hurricane season, approached the Bahamas from the southeast on Friday morning, with maximum sustained winds of 75 miles per hour. Strong squalls and possible storm surges, forecast between three to five feet, threatened the islands, according to the National Hurricane Center in the United States.

The potential storm surges were “on top of astronomical tides,” the center’s director, Ken Graham, said on Friday. He described Isaias as “a very large storm,” with tropical-force winds stretching out as far as 180 miles from the hurricane’s center.

The hurricane center warned that Isaias could produce flash flooding and mudslides across the Dominican Republic, northern Haiti, and Turks and Caicos. A hurricane warning was issued for the northwestern Bahamas, and a hurricane watch and tropical storm warnings were issued for part’s of Florida’s east coast.

The center forecast that the storm would near southeast South Florida on Friday night and through Saturday, and then travel north up the state’s eastern coast. Isaias threatened strong winds, heavy rainfall and high storm surges late this weekend, it said, and was on course to move into the Carolinas early next week.

“We are going to be dealing with this one for quite a while,” Mr. Graham said.

Across the central Bahamas on Friday, conditions gradually deteriorated as the storm barreled across new ground. The threat from Isaias to the Bahamas comes less than a year after Hurricane Dorian ravaged Abaco and Grand Bahama, leaving residents in those areas especially unnerved. Many survivors of Dorian, who saw homes, schools, banks and whole communities crushed to rubble, are still living in tents and unrepaired homes.

And the storm also arrives as the Bahamas is in the throes of fighting a second wave of coronavirus infections. Grand Bahama Island has 247 of the country’s 508 cases, and is in the middle of a two-week lockdown, during which only essential workers and those who are shopping for essential items are allowed to leave their homes.

Prime Minister Hubert Minnis on Thursday night announced the temporary relaxation of restrictions to give people more time to prepare for the storm. While there are formal hurricane shelters on Grand Bahama, it was unclear how officials would ensure social distancing in them.

In an interview with The Nassau Guardian, Melissa McPhee, 44, said her Grand Bahama home was protected only by a tarp on her roof, after having sustained significant flood and wind damage during Dorian. But she said that she had nowhere else to go.

Ms. McPhee said that, as someone with an underlying condition, she was at a high risk for complications from Covid-19. She was afraid to venture out to prepare for Isaias, she said, and felt that she could not chance staying in a crowded hurricane shelter.

Florida has also been grappling with a surge in coronavirus cases. There were more than 461,000 cases statewide and more than 6,500 deaths as of Friday since the beginning of the pandemic, according to a New York Times database. Friday was the third consecutive day that Florida set its record for the most deaths reported in a single day.

Gov. Ron DeSantis said at a news conference on Friday that Florida was “fully prepared for this and any future storm during this hurricane season.” He said that the division of emergency management had been working at its most active level since March, “allowing them to actively plan for hurricane season even while responding to the Covid-19 pandemic.”

Mr. DeSantis added that early on, the division had created a protective equipment reserve for hurricane season, including 20 million masks, 22 million gloves and 1.6 million face shields.

This week, the state’s division of emergency management announced that state-sponsored coronavirus testing sites in 11 counties would remain open, but that others would close at 5 p.m. Thursday until it was safe to reopen.

Meteorologists have forecast a busy Atlantic hurricane season, which runs from June 1 through Nov. 30, raising fears among emergency managers about how to handle a potential major hurricane landing during the pandemic. Evacuation orders typically call people into the close quarters of emergency shelters, or to crowded distribution centers.

Last week, Hurricane Hanna hit part of Texas as a Category 1 storm, landing near some of the cities and counties that have seen a sudden spike in Covid-19 cases and hospitalizations. San Antonio officials handed out hotel room vouchers for people who fled their homes, and the mayor of Corpus Christi urged people to wear masks at home if they took in relatives.

The average hurricane season usually produces 12 named storms, including three that develop into major hurricanes. This year, the National Oceanic and Atmospheric Administration predicted an above normal season in the Atlantic, with as many as 19 named storms. Up to 10 of those storms could become hurricanes, and as many as six of those could develop into Category 3, 4 or 5 hurricanes.