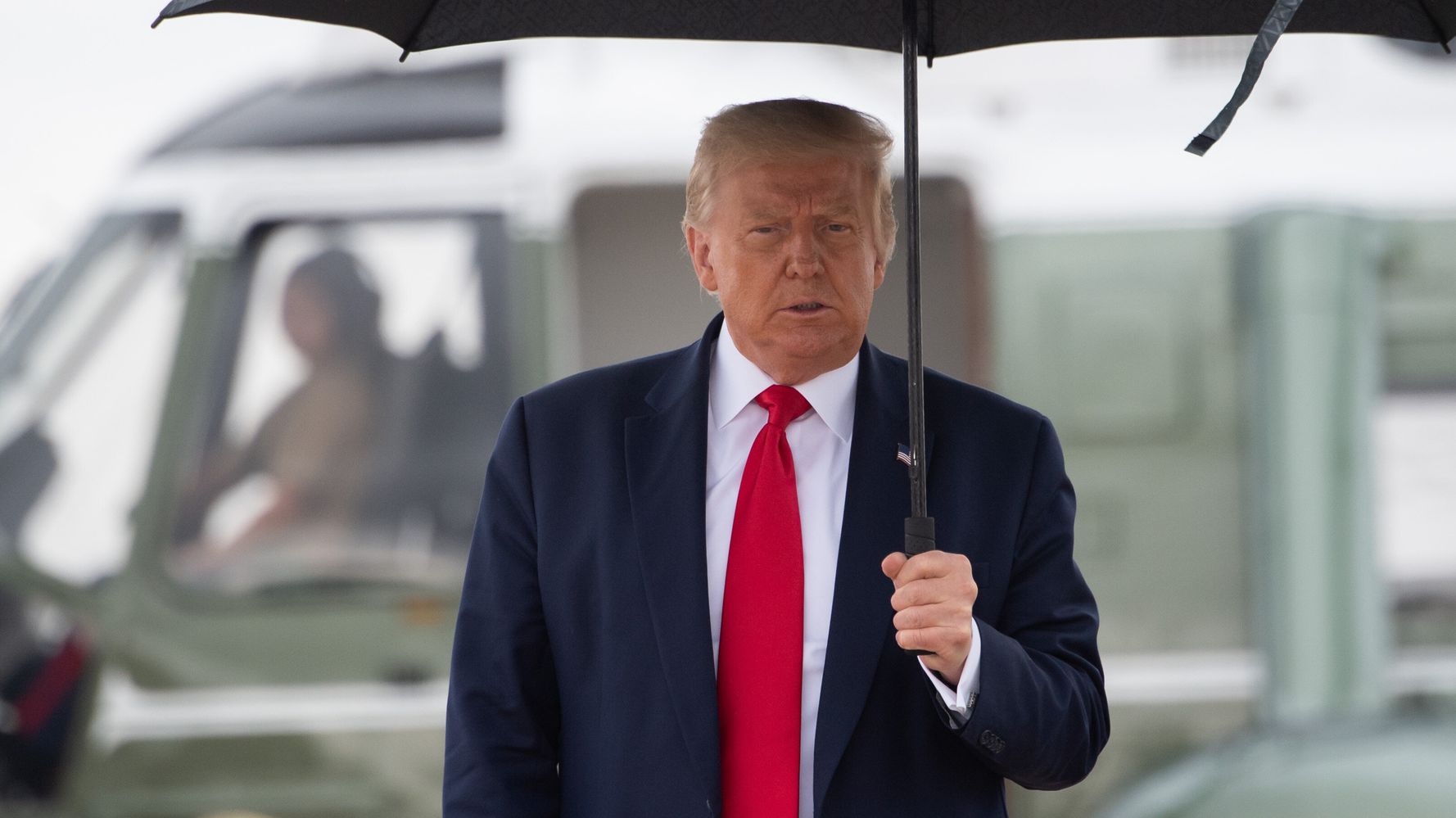 WASHINGTON ― A hyperactive hurricane season has finally done what the Republican Party has been unwilling to do: blocked President Donald Trump, at least temporarily, from funneling many tens of thousands of donor dollars into his own cash registers.

Since becoming president, Trump has directed $6.9 million in campaign money to himself, according to a HuffPost analysis. But he will miss out on rental and catering fees after a strengthening Hurricane Isaias forced GOP officials to cancel Saturday’s fundraiser at his golf resort next to Miami International Airport.

The event was expected to bring in $5 million, with, if past events are indicative, close to $100,000 of that going to Trump National Doral.

That would have added to the $1.4 million that the Trump campaign, the Republican National Committee and two associated joint fundraising committees have already paid the struggling golf course between January 2017 and June 30, 2020, according to a review of the committees’ filings with the Federal Election Commission. Trump, as the head of the party, essentially controls all four of those committees’ spending.

“Throughout Trump’s presidency, the lines have been blurred between Trump’s personal interests, his political interests, and his official duties,” said Brendan Fischer, a lawyer with the non-partisan Campaign Legal Center. “The $6.9 million paid by Trump-controlled political groups to Trump properties is further evidence of how Trump and his family have profited off of the presidency.”

Only Trump’s New York City hotel, which has received $1.7 million, and nearby Trump Tower, his mixed-use skyscraper that has gotten $1.6 million, have taken in more Trump campaign money than Doral. The hotel has hosted fundraisers and rents rooms to RNC officials on business in New York. Trump Tower has continued to receive $37,542 in rent per month for office space – even though the campaign is headquartered in an Arlington, Virginia, high-rise, about 3 miles from the White House.

Trump’s hotel in Washington has collected $905,073 so far in Trump campaign money, while Mar-a-Lago, his private club in Palm Beach, Florida, has collected $639,031.

In all, 13 different Trump business entities have benefited from Trump campaign spending, including his hotels in Las Vegas and Chicago and golf courses in suburban New Jersey and upstate New York. Trump’s campaign has even spent $1,769 on “Trump Ice” bottled water.

Rick Wilson, a longtime Florida-based GOP consultant and a founder of the anti-Trump Lincoln Project, said more news of Trump’s profiteering from his campaign is not likely to change the views of his most loyal supporters.

“His people genuinely don’t care what he does, no matter how sleazy. He could walk out the door tomorrow with every penny in the account and they wouldn’t give a damn,” Wilson said. “I’m just shocked he hasn’t ripped them off even more blatantly.”

Paying The Family Off The Books

The $6.9 million total does not include the $180,000 a year each the campaign is quietly paying the wife of one Trump son and the girlfriend of another through former campaign manager Brad Parscale’s private firm so as to keep those figures off the FEC books.

“We cannot know how much Trump campaign cash may have secretly flowed to Trump family members or the Trump Organization via payments made through Brad Parscale’s conduit firms,” said Fischer, whose group earlier this week filed a complaint with the FEC asking for an investigation.

“Trump is a gangster who got the GOP contract and is doing what gangsters do: skimming off the top,” said Stuart Stevens, a Republican consultant who worked on the presidential campaigns of George W. Bush and Mitt Romney. “There will also be kickbacks. Does anyone really think Brad Parscale is keeping all that loot?”

According to FEC filings, Parscale’s firms have received $39 million from the Trump and RNC committees since January 2017.

Parscale did not respond to HuffPost queries about the payments to Kimberly Guilfoyle and Lara Trump. In April, he told HuffPost: “I can pay them however I want to pay them.”

Neither the campaign nor the RNC responded to queries about the spending at Trump properties. In the past, such as when the party held half-million dollar quarterly meetings at Doral, officials have said that RNC members and donors liked Trump properties and enjoyed visiting them on party business.

On top of the $6.9 million Trump has received from committees he controls, he has also taken in $1.9 million from 162 different Republican candidates and political action committees, including $572,870 from America First Action, the superPAC that supports him and for which he has hosted fundraisers.

Of that $1.9 million, $1.6 million – or 84 percent ― was for room rental, restaurant charges and catering at Trump’s hotel on Pennsylvania Avenue, just blocks from the White House.

On top of the many millions in self-directed campaign dollars are several million, at least, that Trump has pocketed in taxpayer dollars, thanks to room and food charges for Secret Service agents and other government officials who have stayed at Trump properties during his repeated visits to them.

This January, for example, Trump’s Doral golf resort suddenly jacked up its rates for its least expensive rooms from $254 to $539 in the days before Trump made public his plans to travel to the RNC meeting there.

That higher figure is just under the maximum per-night rate federal government rules permit for a government employee’s use of a hotel in South Florida, and is triple the normal “per diem” rate employees are supposed to follow.

In 2017, according to documents obtained by the group Property of the People under the Freedom of Information Act, Trump’s Mar-a-Lago resort refused to lower its room charges below the legal maximum $546 a night for administration officials staying there, despite State Department requests to bring them into line with the government per diem of $182. The White House ultimately also approved a $1,005.60 bar tab after the State Department would not do so.

According to The Washington Post, Trump’s business charged Secret Service agents as much as $650 a night for rooms at Mar-a-Lago and $17,000 a month for a cottage at Trump’s golf resort in Bedminster, New Jersey.

Precisely how many taxpayer dollars wind up in Trump’s pocket from these stays cannot be determined. The White House, despite numerous queries from HuffPost over a period of many months, refuses to disclose how many executive branch employees are part of Trump’s entourage when he visits his own properties and how much it is costing taxpayers. How much of that revenue winds up as profit flowing to Trump also is not known because he reneged on a campaign promise ― and decades of precedent for presidents and presidential nominees ― by refusing to disclose his tax returns.

“Donald Trump’s self-dealing from inside the White House is perfectly consistent with his pattern of corruption and incompetence,” said Eliana Locke, a spokesperson for the Democratic superPAC Priorities USA. “It is no surprise that during one of the biggest crises in American history, Donald Trump and his GOP allies are nickel and diming Americans struggling to stay in their homes and feed their families while Donald Trump takes millions of tax dollars for himself.”

When Trump began his run for the White House in 2015, he frequently boasted that he did not want contributions from the “special interests” and that he would fund his own campaign. At one point, he claimed he would spend as much as $1 billion of his own money to win. During much of 2015, he actually spent only a few million of his own dollars and largely relied on the proceeds from selling “Make America Great Again” hats from his campaign web site. He began spending more of his money as the GOP nomination appeared within reach, eventually passing $50 million.

But after he clinched his party’s nod, Trump immediately began raising large-dollar contributions ― and directing more of that money into his own pocket. In July 2016, he nearly quintupled the rent he was charging his campaign for office space in Trump Tower, from $35,458 a month to $169,758, even though the number of employees remained the same.

Trump wound up writing his campaign a check for a final $10 million in October after he was told the campaign would be unable to buy needed TV advertising without it, but then immediately started recouping that upon taking office. He opened his re-election account the day of his inauguration ― more than two years earlier than his predecessors ― and began paying himself rent at Trump Tower for office space that went largely unused. And he had his campaign and the RNC hold events at his properties rather than less expensive alternatives.

That pattern was to continue Saturday, with the Doral fundraiser. How much, exactly, the Trump campaign and the RNC, which were jointly hosting it, had planned to spend and how much of that, if any, was a non-refundable deposit is unclear.

The Trump Organization, which operates Doral and all of Trump’s businesses, did not respond to a HuffPost query. When Trump held a lunchtime fundraiser there in June 2019, the RNC paid the golf course $84,822 three months in advance.

Of course, while Hurricane Isaias had the effect of canceling Saturday’s fundraiser, the storm will not be able to keep it off the books forever.

“It’ll be back. Don’t you worry,” said one top White House informal adviser on condition of anonymity.

Predicting that it would be rescheduled at the Doral property within two or three weeks, the adviser said the campaign “needs the money.”